Aaron Phangiso, who has played 16 ODIs and nine Twenty20Is, is expected to be tested Friday at the ICC-accredited High Performance Academy at the University of Pretoria. 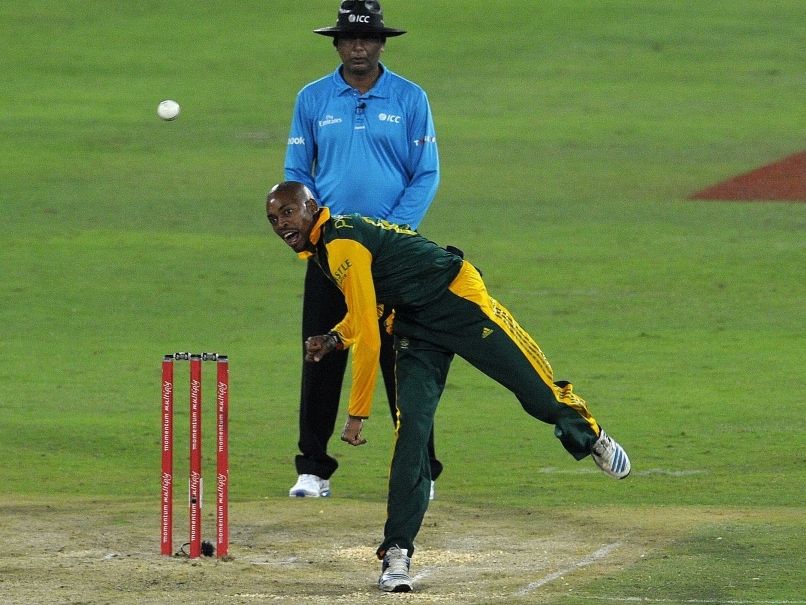 Aaron Phangiso's action will now be scrutinised further in accordance with the CSA Regulations for the Review of Bowlers Reported with Suspected Illegal Bowling Actions.
Durban:

South Africa spinner Aaron Phangiso has been reported for a suspected illegal bowling action during a domestic 50-over match, the South Africa cricket Board said. (Read More in Cricket)

The 32-year-old, who has been included in the Proteas squad for the ICC World Twenty20, has been reported after helping his domestic side Highveld Lions into the final of South Africa's provincial 50-over competition on Wednesday when he took 2-38 in eight overs.

"Aaron Phangiso of the Highveld Lions has been reported for a suspected illegal bowling action during the Momentum One-Day Cup match against the Warriors at Bidvest Wanderers, Johannesburg, on 24 February 2016," the Cricket South Africa said in a statement.

"Phangiso's action will now be scrutinised further in accordance with the CSA Regulations for the Review of Bowlers Reported with Suspected Illegal Bowling Actions. He is required to undergo independent analysis by a member of the ICC Panel of Human Movement Specialists and is permitted to continue bowling until the results of the testing are known," the CSA said.

Reports said that Phangiso, who has played 16 ODIs and nine T20Is, is expected to be tested Friday at the ICC-accredited High Performance Academy at the University of Pretoria.

Fourteen days after that test, an ICC appointed specialist will furnish the body with written report which will determine whether Phangiso's action is legal or not, according to a report.

The time frame for his testing means that Phangiso's performance in the World T20 could be affected. Even if he is tested immediately, the 14-day period for the analysis would only conclude on March 10. He will hope that he is cleared before South Africa open their World Twenty20 campaign against England in Mumbai on March 18.

Changes to squads are allowed until March 8, which may see South Africa's selectors look for another back-up spinner to Imran Tahir.

It is the latest setback for Phangiso, who early this year was prevented from boarding an international flight following South Africa's ODI series win in India because he was drunk and disorderly and CSA had subsequently handed him an unknown sanction.

This week, Phangiso had to apologise for being caught on camera pretending to sniff an unknown substance off his leg during South Africa's T20 against England at the Wanderers.

Comments
Topics mentioned in this article
Aaron Phangiso World T20, 2016 South Africa Cricket Team Cricket
Get the latest updates on IPL Auction 2023 and check out  IPL 2023 and Live Cricket Score. Like us on Facebook or follow us on Twitter for more sports updates. You can also download the NDTV Cricket app for Android or iOS.