South Africa skipper Temba Bavuma said "it wasn't ideal" to get a directive on taking the knee hours before the start of their T20 World Cup match vs West Indies and promised to be there for Quinton de Kock, who chose to withdraw from the game instead of following the order. 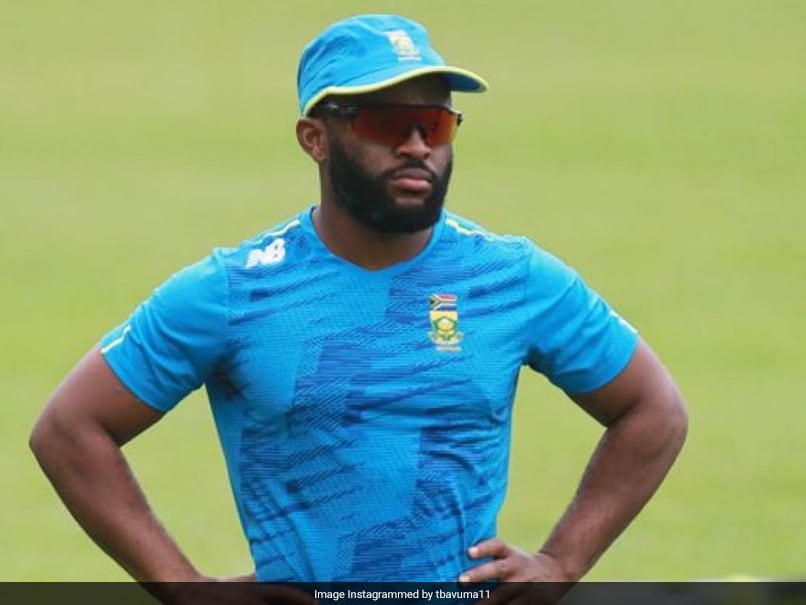 Temba Bavuma said "it wasn't ideal" to get a directive on taking knee hours before the West Indies match.© Instagram

South Africa skipper Temba Bavuma on Tuesday said "it wasn't ideal" to get a directive on taking the knee hours before the start of their T20 World Cup match against the West Indies and promised to be there for Quinton de Kock, who chose to withdraw from the game instead of following the order. A former captain in all three formats of the game, de Kock opted out moments before toss, refusing to take part in the gesture supporting the 'Black Lives Matter' movement.

"Quinton is an adult. He's a man in his own shoes. We respect his decision. We respect his convictions," Bavuma, who is South Africa's first black cricket captain, said at a media interaction after his side defeated the defending champions by eight wickets.

"If there's a need for further conversations to be had, I'm sure those will definitely happen among the guys."

Cricket South Africa had on Monday evening unanimously agreed to issue a directive requiring Proteas to adopt a consistent and united stance against racism by taking the knee prior to the start of their remaining World Cup matches.

The instruction from the board came in this morning and a meeting was convened between a couple of team members before being passed on to the players when they were to travel to Dubai, Bavuma said giving a timeline of the events.

"I think the trip was about an hour and a half to two hours. I guess that's where Quinton made his decision. We found out -- I found out as the captain when we got to the changing room."

Bavuma said it was not ideal to get the directive just before the match but acknowledged that there never was going to be an ideal time.

"Obviously as a team we're surprised and taken aback by the news. Quinton is a big player for the team, not just with the bat. But the role he plays from a senior point of view and from an experience point of view, and not having that at my disposal as a captain was obviously something I wasn't looking forward to."

The star wicketkeeper-batter had made it clear in the past as well that the gesture should be an individual choice. He has mostly opted to stand with his hands slung casually behind his back while various gestures were adopted in the past.

Asked whether they would seek a replacement if de Kock continues the stand of not taking the knee, Bavuma said: "I don't know how far it's going to develop. I mean, the decision that he's taken is only today, so I can only speak about what has happened today. It wouldn't be my decision whether to replace Quinton or to get a substitute. That would be the coach and the selectors' call."

Despite the setback, South Africa cruised to their first Super 12s win. They restricted the defending champions to 143/8 and then rode on solid batting displays from Aiden Markram and Rassie van der Dussen to canter home with 10 balls to spare.

"I think we have to keep focusing as much as we can on the team, most particularly about matters on the field. I think we'll lose a lot of energy as players if we start giving 100 per cent to everything that is, I guess, being discussed outside of the team. At the end of the day I think you guys are going to judge us by how well we bowl the ball and how well we hit the ball. That's what you're going to judge us by at the end of the day," he concluded.

Quinton de Kock Temba Bavuma ICC T20 World Cup 2021 Cricket
Get the latest updates on IND vs NZ 2021, check out the Schedule and Live Score . Like us on Facebook or follow us on Twitter for more sports updates. You can also download the NDTV Cricket app for Android or iOS.