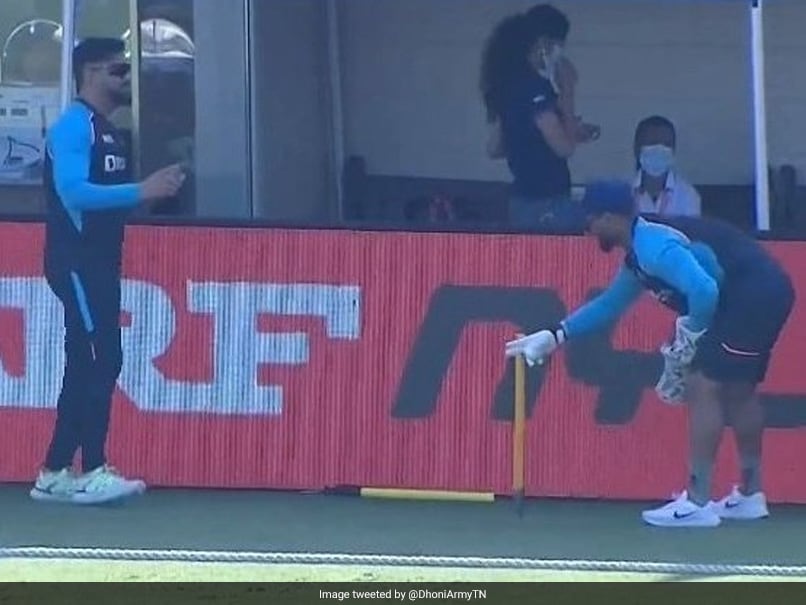 MS Dhoni, who was roped in as the mentor for Team India for the ongoing T20 World Cup, was seen in action in Dubai on Wednesday as cameras captured the former India captain in his new role. Dhoni was seen giving wicketkeeping lessons to Rishabh Pant during India's T20 World Cup warm-up game against Australiaat the ICC Academy Ground on Wednesday. Play was halted for a few minutes due to sightscreen issues at the venue and that is when the cameras captured Dhoni working with Pant as the latter fine-tuned his wicketkeeping skills.

In the warm-up match, India started well with the ball as Ravichandran Ashwin picked up two wickets on consecutive deliveries in the second over of the match.

Ashwin first trapped David Warner right in front of the stumps to send back the Australian opener for one and on the very next delivery he sent back Mitchell Marsh for a golden duck.

Ravindra Jadeja replaced Ashwin into the attack, and he too struck early by sending back Aaron Finch for eight.

In this match, Rohit Sharma is leading the side even though Virat Kohli is out on the field and he even rolled his arm over for an over.

With Hardik Pandya still not bowling, India are trying to figure out who their sixth bowling option could be during the T20 World Cup.

Australia Cricket Team ICC T20 World Cup 2021 Cricket
Get the latest updates on SA vs IND 2021-22, check out the Schedule and Live Score . Like us on Facebook or follow us on Twitter for more sports updates. You can also download the NDTV Cricket app for Android or iOS.