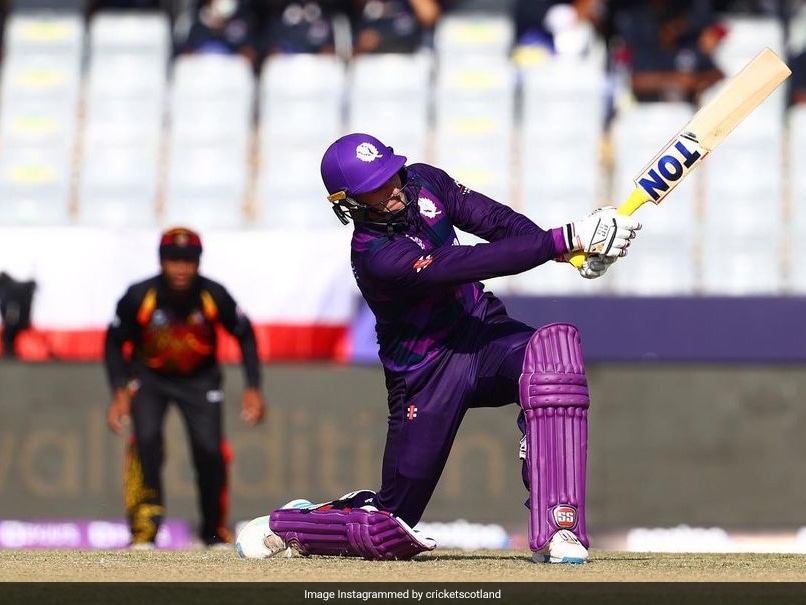 Richie Berrington slammed a stroke-filled 70 while Josh Davey snapped four wickets as Scotland inched closer to the Super 12s with a comfortable 17-run win over Papua New Guinea in their Group B match of the ICC T20 World Cup on Tuesday. Scotland grabbed the top position in Group B with two wins having shocked Bangladesh in their opening game. Berrington put on 92 runs off 65 balls with Matthew Cross (45) before adding another 33 with Calum MacLeod (10) as Scotland posted a challenging 165 for 9 after opting to bat.

Kyle Coetzer's men then produced a splendid bowling effort to skittle out PNG for 148 in 19.3 overs with Davey (4/18) emerging as the standout bowler. PNG thus made an early exit to their maiden campaign at the T20 World Cup following the second successive loss.

They had lost to Oman by 10 wickets in their tournament opener.

Chasing 166 to win, PNG needed their batters to fire but they couldn't get any momentum and were soon reduced to 35 for 5 in 6 overs. Norman Vanua (47) and Kiplin Doriga (18) then fought back adding 53 off 29 balls to raise hopes but Watt broke the partnership dismissing the latter in the 17th over.

Davey then returned to remove Vanua to dash PNG's slim hopes of a maiden victory in its first global appearance. Earlier, Berrington slammed three sixes along with six hits to the fence during his 49-ball stay to set the foundation for a big score but PNG put brakes in the last three overs, conceding only 19 runs and taking six wickets in the process.

Kabua Morea (4/31) and Chad Soper (3/24) were the most successful bowlers for PNG. Goerge Munsey smashed three fours to give Scotland a flying start but Morea castled skipper Coetzer at the other end in the third over to deal the first blow.

Munsey too perished soon while trying to muscle a delivery from Soper as Scotland slipped to 26 for 2 in 3.4 overs. Cross and Berrington then steadied the innings as Scotland reached 67 for two in 10 overs.

Berrington was the main aggressor as he pulled one from Soper for a boundary before dancing down the track and depositing Lega Siaka over long-on for a maximum. He also treated Charles Amini with disdain, pulling him through the square leg region for another four. Cross then slogswept Amini over deep mid-wicket to bring up their 50-run partnership.

Berrington also matched his partner with another six over long-off. Nosaina Pokana was then in the line of fire as Berrington and Cross milked him for 18 runs with the help of two fours and a six as Scotland crossed the 100-mark in 13 overs.

Simon Atai broke the partnership when he had Cross caught at deep mid-wicket in the 15th over. However, it made no difference as MacLeod joined hands with Berrington and got 15 runs off Morea. Berrington then slammed Soper over long-on for another maximum to accumulate 11 runs off the over.

PNG, however, made amends in the last three overs with Pokana bowling a tight over and Soper striking twice in three balls, removing Macleod and Berrington. In the last over, Michael Leask hit a six but PNG picked up four wickets to keep things in check.

Richie Berrington ICC T20 World Cup 2021 Scotland vs Papua New Guinea, Match 5 Cricket
Get the latest updates on Fifa Worldcup 2022 and check out  Fifa World Cup Schedule, Stats and Live Cricket Score. Like us on Facebook or follow us on Twitter for more sports updates. You can also download the NDTV Cricket app for Android or iOS.