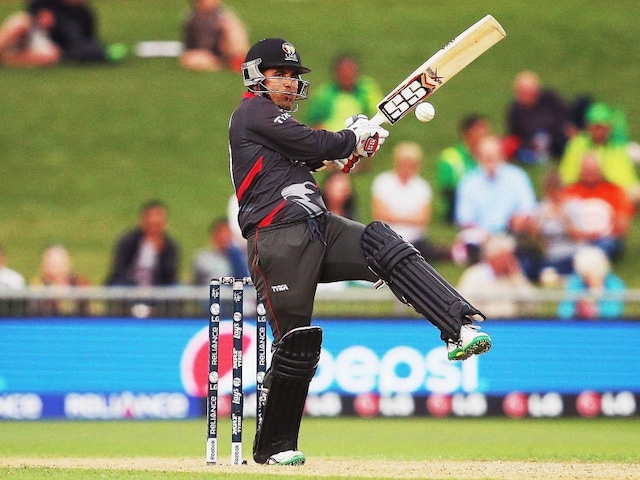 United Arab Emirates captain Mohammed Tauqir found a positive in his team's 129-run defeat against Pakistan at the World Cup in Napier on Wednesday -- his shining star Shaiman Anwar.

Anwar, born in Sialkot in Pakistan before migrating to the UAE, struck 62 in UAE's 210-8 in reply to Pakistan's 339-6 in the Pool B match at McLean Park. (Match Highlights | Scorecard | Pics)

"I think he's a brilliant batsman," said Tauqir of Anwar who had scores of 67, 106 and 35 in previous games. (Waqar Urges Pakistan to Improve)

Anwar became the highest run-getter in the tournament with 270, two ahead of Sri Lanka's Kumar Sangakkara's 268 and West Indian Chris Gayle's 258.

Meanwhile, Tauqir said his team's fielding let them down against Pakistan.

"I think the fielding was below the mark, we dropped a few catches," said Tauqir of crucial dropped chances off Pakistani opener Ahmed Shehzad on eight and 11. (Irfan Injury Not Serious, Says Waqar Younis)

Shehzad went on to score 93 and added an invaluable 160 for the second wicket with Haris Sohail who made 70. Skipper Misbah-ul-Haq chipped in with 65.

"I think if we would have taken those catches the total would have been different," said Tauqir.

The UAE captain defended his decision to put Pakistan into bat after winning the toss.

"I think we thought probably the wicket had a little bit of moisture and it was overcast, so we wanted to get them all out earlier and then chase the runs," said Tauqir.

The UAE captain said he hoped young Emiratis would get inspired by team's presence in the World Cup and take up the sport.

"I believe our presence in the World Cup definitely will inspire many more Emirates to follow the game," said Tauqir who skippers a squad made up mostly of players who have Pakistan and Indian roots.

"I mean the kind of infrastructure and facilities we have, it's growing amongst the Emirate population as well."

"Aaqib has helped us a lot. He is with the team for almost two years. He is putting a lot of hard work in with the team. Because of his guidance and knowledge, we have qualified for the World Cup, and I believe we have done well during this tournament."

Tauqir said he was satisfied with his team's performance even though they have lost four games.

"We had a couple of close games against Zimbabwe and Ireland," said the UAE captain of the four and two wicket defeats respectively.

"I think even today's game playing 50 overs against Pakistan, it's a big positive for the team. Our effort is to do well against the Test nations and put up a decent performance.

"In batting we need to do the best and play all 50 overs and in bowling also, we need to restrict them. I think we should not concede 400-plus runs."

Comments
Topics mentioned in this article
Shaiman Anwar United Arab Emirates World Cup 2015 Cricket
Get the latest Cricket news, check out the India cricket schedule, Cricket live score . Like us on Facebook or follow us on Twitter for more sports updates. You can also download the NDTV Cricket app for Android or iOS.