South Africa won their encounter against Ireland by a convincing 201 runs, thanks to hundreds from Amla and Du Plessis. Catch all the highlights of the match here. 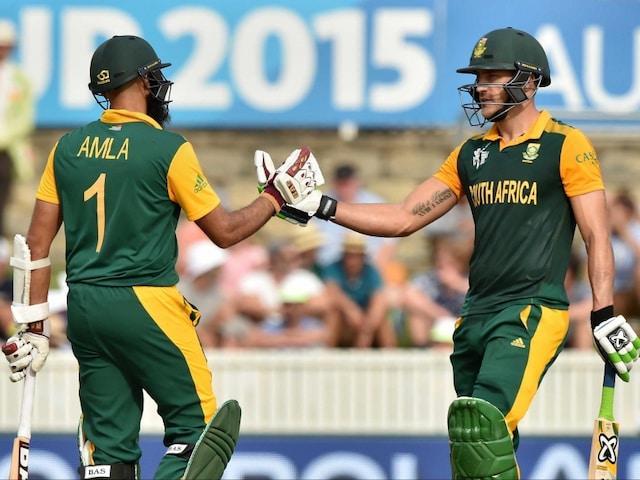 Mind blowing display from South Africa, again. After posting a massive 411/4, their bowlers crushed Ireland for just 210. Kyle Abbott was the pick of the bowlers with a 4-wicket haul while Morne Morkel picked up 3 and Dale Steyn chipped in with 2 wickets. Ireland's chase never got off the ground as they lost half their side under 50 runs. A defiant partnership between Kevin O'Brien and Andy Balbirnie salvaged some pride for the Irish.

Earlier, South Africa went on a rampage with the bat, thanks to tons from Hashim Amla and Faf du Plessis. Ireland dropped Amla on 10 and then paid a heavy price for it. Faf du Plessis added 247 runs for the 2nd wicket with Amla and then Rossouw and Miller finished the innings with a flourish. While Rossouw scored an unbeaten 30 ball 61, Miller stayed no out on 46. Ireland have chased three hundred twice but a total of 411 was too much to chase on any wicket. Catch all the Highlights here. (Scorecard | Schedule | Points Table | History | Stats | Pics)

4:16 PM (IST): FOUR! Dockrell takes on Morkel. Back away and swats the short delivery over wide long on.

4:02 PM (IST): FOUR! Cracking shot from Sorensen. Straight down the ground and then he follows it up with a SIX over the bowler's head!

3:27 PM (IST): SIX! Dockrell dances down the track and lofts Tahir over long off.

3:17 PM (IST): WICKET! AB de Villiers gets the 7th wicket. John Mooney departs. He bats, keeps wickets and now he's getting wickets - is there anything AB can't do? Ireland 150/7 after 30.2 overs vs South Africa 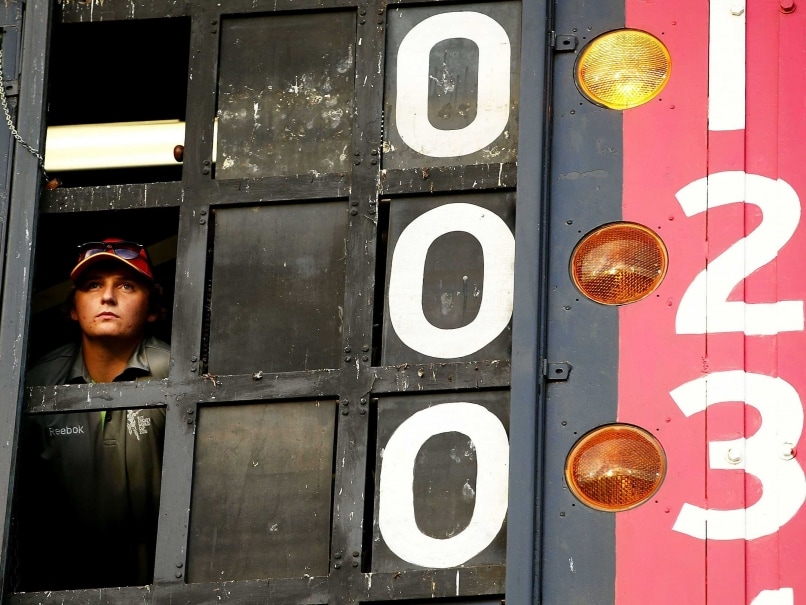 3:09 PM (IST): FOUR! Kevin O'Brien isn't going down yet. Dances down the track and whacks a full toss from du Plessis over covers.

2:49 PM (IST): FIFTY! Beautiful back to boundaries from Balbirnie to bring up his maiden ODI fifty.

2:37 PM (IST): Kevin O'Brien and Balbirnie stitching a partnership here. Ireland need to get as close to the South African total as possible else, their net run-rate would take a massive hit. Ireland 91/5 after 21 overs. 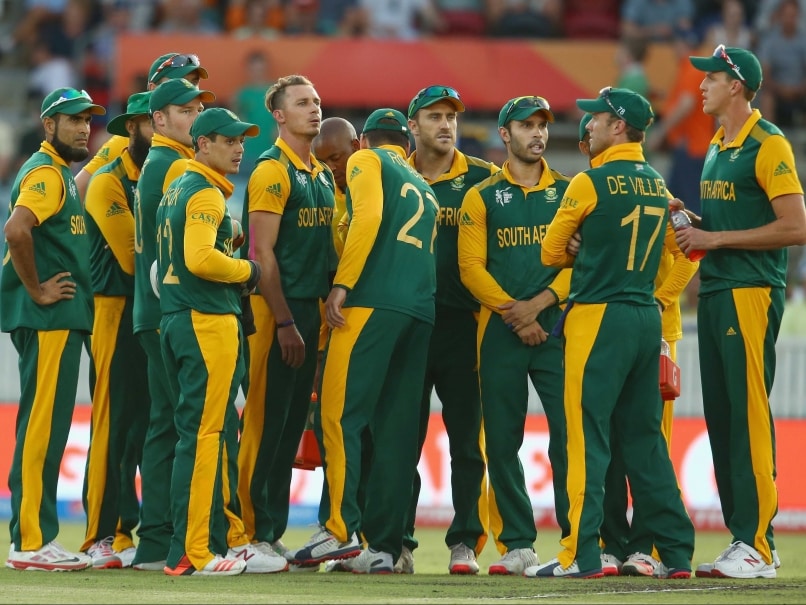 2:30 PM (IST): FOUR! O'Brien edges a short and wide delivery from Behardien. Morkel with a good attempt at the boundary but couldn't stop the ball from rolling over.

2:24 PM (IST): South Africa tightening the noose on Ireland. Kevin O'Brien is still at the crease but the asking rate has already gone past 10 an over. The Proteas have been clinically efficient but Ireland has miles to go to even to salvage some pride. Ireland 65/5 after 16 overs.

2:04 PM (IST): WICKET! Kyle Abbott gets a third wicket. Wilson goes for a duck. The collapse has started! Ireland 48/5 after 10.2 overs vs South Africa

1:59 PM (IST): This is not going Ireland's way. Too many to chase against a quality bowling attack. We might just see a collapse from Ireland. 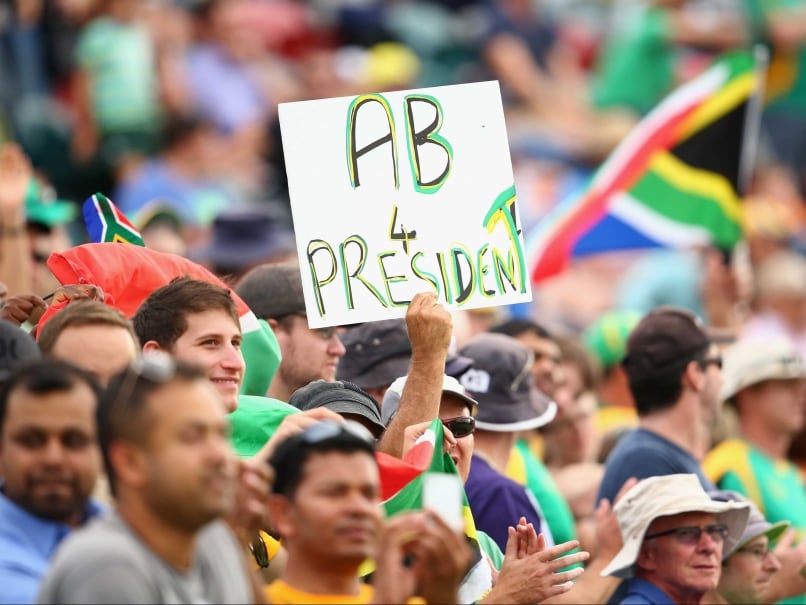 1:31 PM (IST): FOUR! Bad delivery, down the leg side from Abbott and Porterfield smashes that to the long leg boundary.

1:26 PM (IST): WICKET! Stirling edges that. Beautifully bowled by Steyn. Umpire gives not out but South Africa takes the review and yes, gets it right. Stirling has to walk back. Ireland 17/1 after 2.5 overs

1:23 PM (IST): FOUR! Back to back boundaries to Stirling. Outside the off stump from Steyn and beautifully punched through covers.

1:15 PM (IST): FOUR! Outside off stump from Steyn and Porterfield creams it through covers. Good start for the Irish. 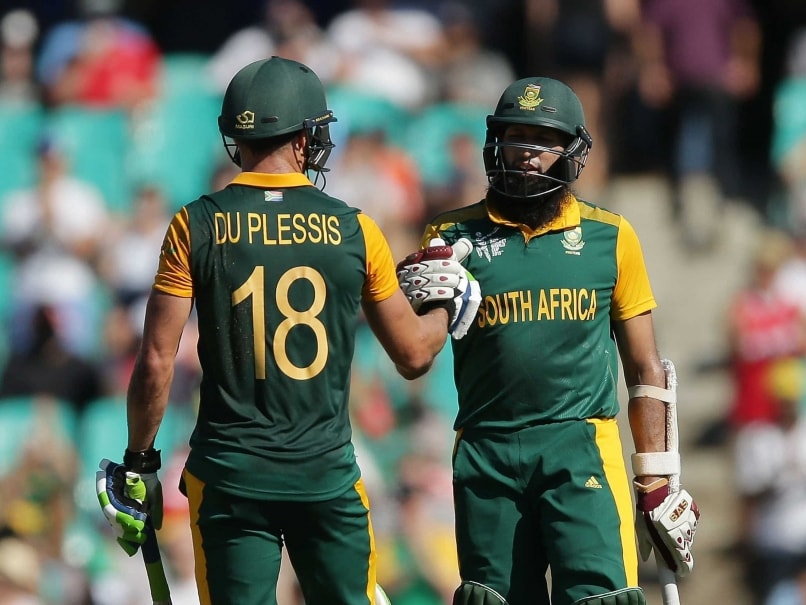 12:31 PM (IST): The carnage continues as Rossouw brings up his fifty!

12:25 PM (IST): SIX and FOUR! Rossouw throwing his bat and everything and connecting! 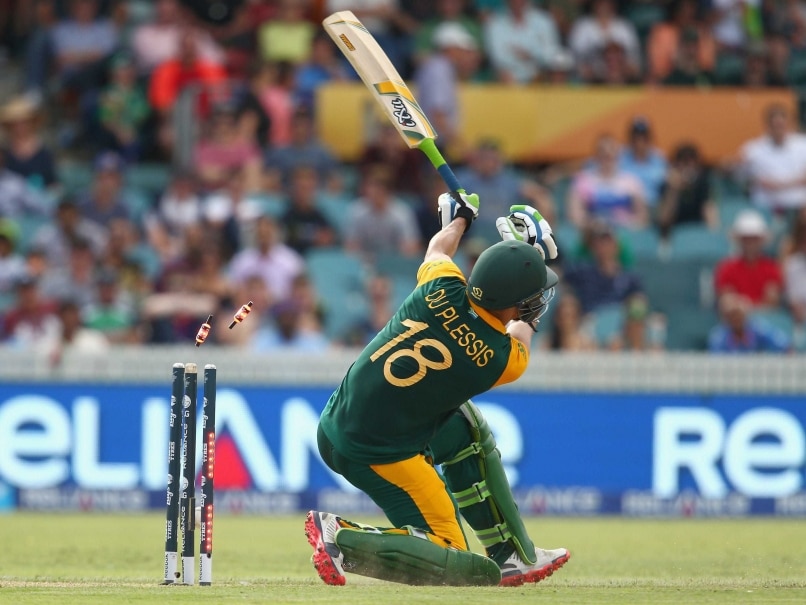 11:55 AM (IST): Two wickets in an over! Just what Ireland needed. First Amla holes out in the deep and now AB fails to connect a reverse sweep! McBrine has brought smiles back on the Irish faces.

11:34 AM (IST): AND SIX! What an over! Mooney has been destroyed in this over! South Africa speeding at top gear!

11:32 AM (IST): FREE HIT and SIX! Amla in overdrive! Short ball and whacks it over the mid wicket fence!

11:30 AM (IST): FOUR! The carnage continues. Short ball, asking to be hit. Amla dispatched it over square leg! 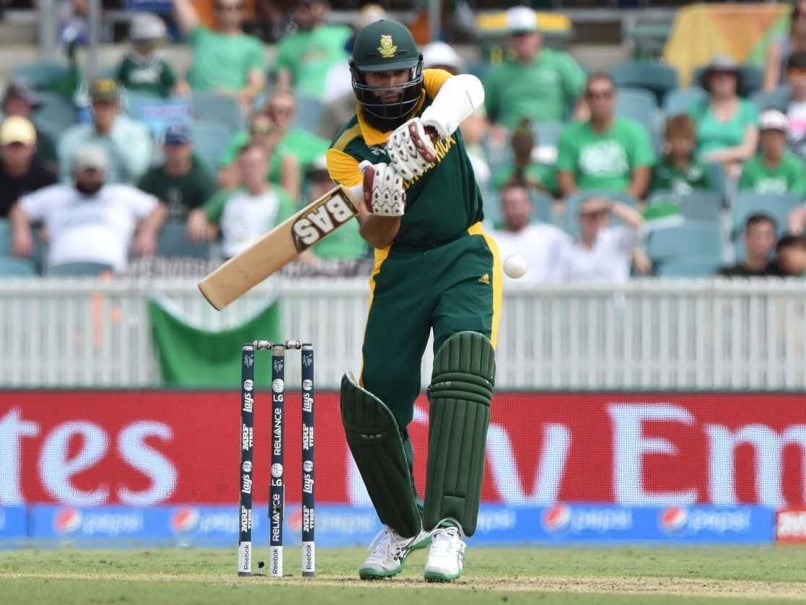 11:05 AM (IST): HUNDRED! Hashim Amla brings up his 20th ODI hundred. That drop has proved real costly for Ireland! Amla becomes the fastest to reach 20 ODI hundreds. He does it in 108 innings breaking Virat Kohli's record. Kohli did it in 133 innings.

11:00 AM (IST): SIX! What a shot from du Plessis! Sterling pitches it up and du Plessis clouts that over long off!

10:54 AM (IST): Amla moves into the nineties. South Africa just pushing the singles and waiting for the bad ball. South Africa 176/1 after 29 overs.

10:50 AM (IST): Both batsmen nearing their hundreds and Ireland desperately need a wicket. Dockrell has put together a couple of good overs now but they put some pressure from the other end?

10:35 AM (IST): SIX! Back to back sixes for Amla. First he hoicks one over mid wicket and now lofts Sorensen over covers! Remember Amla was dropped on 10 and now he's making Ireland pay.

10:32 AM (IST): This is all too easy for South Africa. Amla and du Plessis are milking the bowling and Ireland just can't keep a lid on the scoring. They are hoping for a wicket now because the bowling seems really insipid. 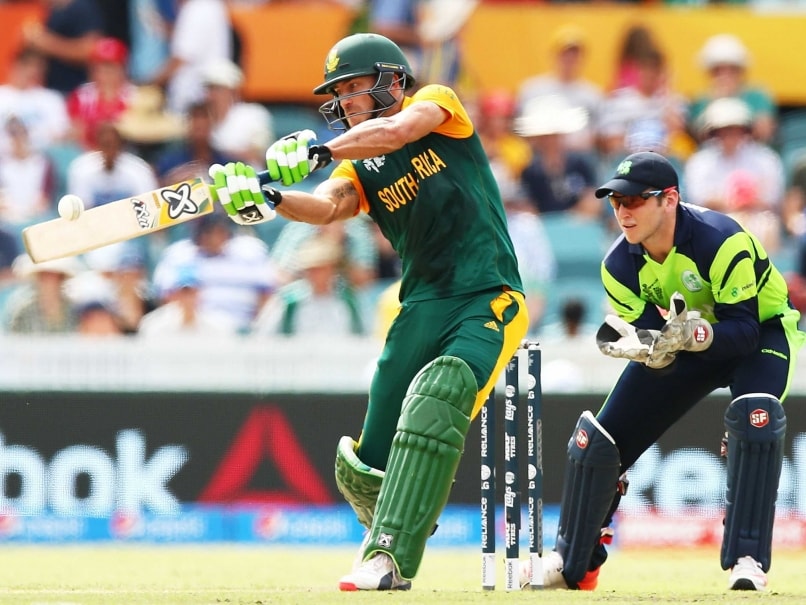 10:26 AM (IST): Du Plessis brings up his fifty now! Match going out of Ireland's grasp, need a wicket, now!

10:22 AM (IST): FOUR! Short again and pulled over cow-corner by du Plessis to bring up the 100-run partnership!

10:17 AM (IST): FOUR! 100 up for South Africa, du Plessis stepping on the gas now! Ireland have bowled way too short to these two batsmen and have lost control. It's easy pickings for both of them. South Africa 107/1 after 19 overs.

10:07 AM (IST): FOUR! Long hop from Dockrell and du Plessis latches onto that. This is bad bowling giving away easy runs to South Africa. 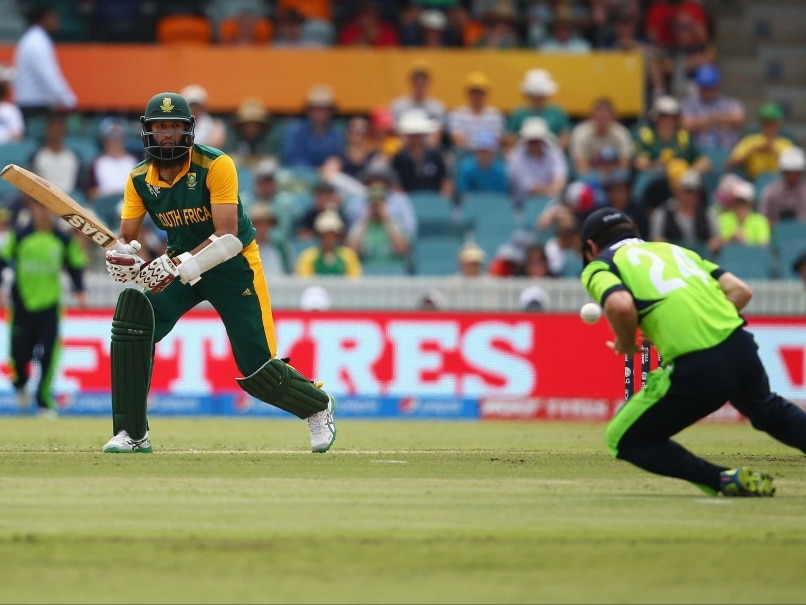 Hashim Amla dropped! How crucial will this be?

10: 04 AM (IST): FOUR! Shot, wide, too easy for Amla to dispatch to the third man boundary. This is now a threatening partnership between Amla and du Plessis. South Africa 78/1 after 14.3 overs.

9:48 AM (IST): FOUR! Short from Dockrell and du Plessis rocks back to send it through cover point. South Africa now dominating the game.

9:37 AM (IST): FOUR! South Africa picking up the pace now. Nice and juicy half volley on middle stump and Amla punches through mid on. 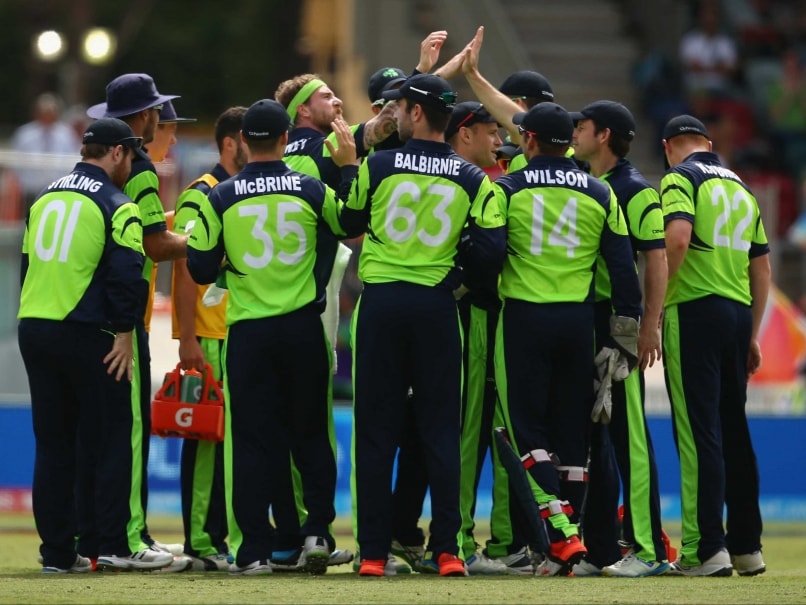 9:31 AM (IST): FOUR! Back to back boundaries for Amla. First he cracks the short ball from Kevin O'Brien through point and then hits a lovely cover drive.

9:25 AM (IST): Faf du Plessis has joined Amla in the middle. John Mooney is in the middle of a very good spell making life difficult for the batsmen. South Africa 25/1 after 5 overs.

9:12 AM (IST): WICKET! Review upheld. Quinton de Kock gone! Fine edge to the keeper. Umpire gave that not out but Ireland were confident. South Africa 12/1 after 2.3 overs.

9:10 AM (IST): FOUR! Width outside off stump and Amla throws his bat at it. Uppish but evades the fielder to go into the cover boundary. South Africa 12/0 after 2 overs.

9:08 AM (IST): FOUR! Half-volley on middle stump and Amla punches it through mid on for the first boundary of the innings.

9:04 AM (IST): Maiden to start off with. John Mooney starts off with a very accurate over to Hashim Amla.

8:39 AM (IST): AB de Villiers has won the toss and has opted to bat first. The South Africans are going into the match unchanged. JP Duminy is still not a 100% fit. 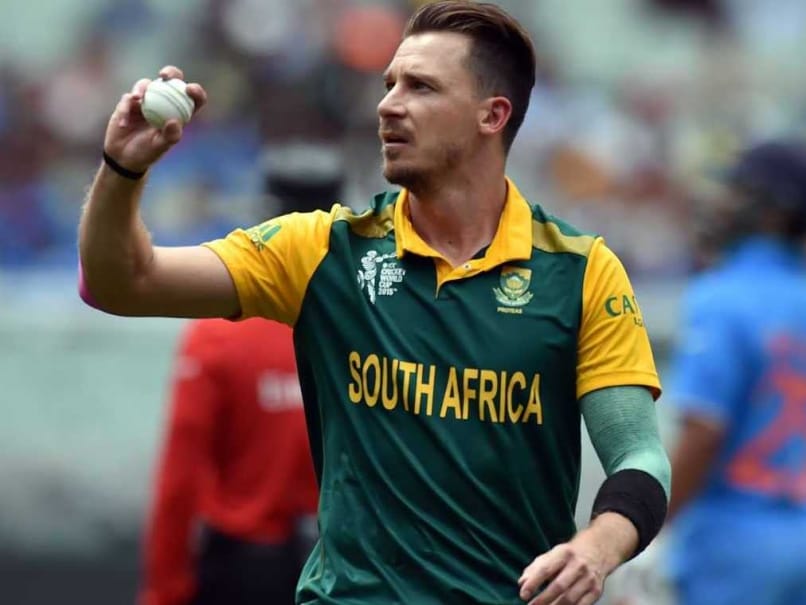 Can Steyn Rattle the Irish on his 100th appearance?

Dale Steyn will become the 19th South African to play 100 ODIs for South Africa during the Cricket World Cup 2015.

Steyn's ODI career has been stretched over a decade to accommodate his longevity in the longer format of the game, and the No. 3 ranked ODI bowler will have an important role to play as the tournament progresses, despite a low-key start. (Read more)

Ireland captain William Porterfield is confident his team will not be overawed by the mighty South Africans in Canberra on Tuesday, saying they had made good plans to contain AB de Villiers' side.

The Proteas, who have won all their three one-dayers against the Irish so far, are overwhelming favourites to win the Pool B encounter at the Manuka Oval that will bring them closer to the quarter-finals. (Read more)

Ireland go into Tuesday's World Cup clash against South Africa in Canberra faced with a question that even fanciful Test nations have struggled to find an answer for.

How does one tame the rampaging AB de Villiers before he destroys the rivals' bowling attack, dents their morale and leaves them dumbstruck by what just hit them? (Read more)