Odisha thrashed hosts Maharashtra 7-0 to register their second win in as many matches. 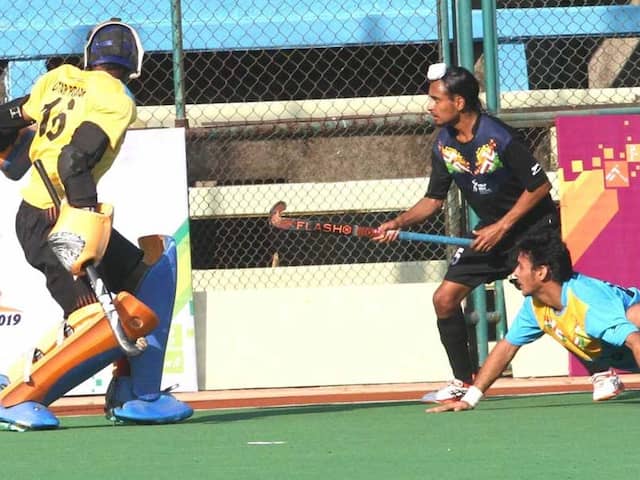 Action from Punjab U-21 vs Uttar Pradesh U-21 game.© Khelo India

The U-17 men's hockey tournament witnessed Odisha and Uttar Pradesh registering victories in their respective matches in Pool A at the Khelo India Youth Games 2019. Meanwhile, Punjab, Odisha and Haryana also emerged victorious in their respective U-21 matches. Haryana demolished Jharkhand 10-0 at the Mumbai Hockey Association Stadium in Mumbai. Haryana, who are touted as strong title contenders, began their campaign on a confident note when they dominated a Jharkhand by taking a 4-0 lead at half-time. Skipper Mandeep Mor top-scored for Haryana, netting thrice. Meanwhile, Abhishek and Mohit scored two goals each. Jasbir, Antil, Deepak and Pankaj scored one apiece.

In another fixture from Pool B, Odisha overcame a spirited challenge from Maharashtra, winning 6-3. Odisha dominated the match from the first quarter as they were leading 3-1 at half-time.

Despite Maharashtra's fightback in the second half, Odisha scored three more goals to emerge victorious. India international Nilam Sanjeep Xess scored a hat-trick while Amit Chirmako, Krishna Tirkey and Ashis Topno chipped in with a goal each.

For Maharashtra, Harish Shindgi, Malhari Chavan and Rohan Patil netted once each.

In a pool-A match, Punjab defeated Uttar Pradesh 1-0 to register their second win. The solitary goal was scored by Harmanjit Singh who converted a penalty corner in the 57th minute. This win earned Punjab three-points.

In the U-17 event, Odisha thrashed hosts Maharashtra 7-0 to register their second win in as many matches. They outplayed the hosts in every department of the game. Sudeep Chirmako led from the front scoring four goals.

Whereas, Sunil Jojo, Sunit Lakra and Prasant Lakra scored one each to give Odisha a 3-0 lead going into the half-time, stated a media release from Hockey India.

On the other hand, Uttar Pradesh hammered Delhi 6-0 to register their first win. Ajay Yadav scored twice, while Pankaj Yadav, Suraj Singh, Rajan Gupta and skipper Saurabh Anand chipped in with a goal each.