Dubbed as one of the strong contenders for the title, India recorded a resounding 4-0 win over Canada in their opening at the Major Dhyan Chand Astroturf stadium on Thursday. 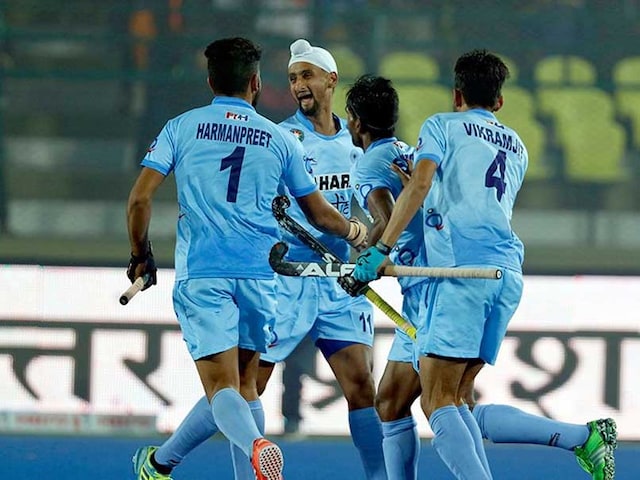 A win will virtually seal India's place in the quarterfinals of the Junior Hockey World Cup.© Hockey India

Their campaign off to a rampaging start, India colts would look to carry forward the momentum when they face England in their second pool match of the men's Junior Hockey World Cup, here on Saturday.

Dubbed as one of the strong contenders for the title, the home team recorded a resounding 4-0 win over Canada in their opening at the Major Dhyan Chand Astroturf stadium on Thursday. Stakes are high for India in the tournament as they look to end their 15-year-old title drought as they last won the event in 2001 in Hobart and the colts would leave no stone unturned to reclaim the glory.

The Indians would also be eyeing an all-win record in the preliminary stages of the tournament which will enable them to top their pool and avoid six-time champions and title holders Germany in the quarterfinals.

But all said and done, the Harendra Singh-coached Indian side is on a dream run this year, having defended the Asia Cup and beaten Germany in a four-nation tournament in Valencia to lift the title.

A win will virtually seal their place in the quarterfinals and the Indians would be eager to raise the level of game a notch high against unpredictable Englishmen, who are be desperate to win their maiden title after having finished fourth twice in the past (1197, 2001).

In the tournament opener yesterday, the Indians outclassed Canada in all departments of the game, a fact which has been asserted by head coach Harendra.

"Look at the margin, possession of ball, circle penetrations, shots on goal, penalty corners, we were by far the superior side. We also did not concede a single penalty corner which that shows we were superior structure wise," he had said after Canada match.

But the Indians will have to keep in mind that with every match every team will grow stronger and from here on improvement will be the key factor.

"There is always need for improvement and we need to keep on improving as the tournament progresses," Harendra conceded. Harmanpreet Singh was impressive yesterday with his defence splitting balls from the backline. Parvinder Singh and Mandeep Singh too had a good match as they threatened the opposition goal on numerous occasion.

Dragflicker duo of Harmanpreet and Varun Kumar is a real threat for any side and they have made their intentions clear by registering names in the scoresheet.

While Harmanpreet scored from a penalty stroke, Varun was bang on target from one of the six penalty corners.

But it will not be that easy against England as they are known for playing hard and physical hockey. They started their campaign on a positive note, beating South Africa 4-2.

"We are keenly looking forward to the match against India. We know that India are a tough side. They are in fine form and playing at home. So it is going to be a tough game but we are prepared and will try to go for a win," Bleby said.

Both the teams will also be keenly observing the weather conditions as heavy fog forced the International Hockey Federation (FIH) to rejig the timings of the final match of every day.

India and England will play at 6pm in the evening, the final match of the day, after extreme cold conditions and dense fog compelled the organisers to reschedule the timings.

Meanwhile in other matches of the day, Korea will face Austria (Pool A), South Africa will take on Canada (Pool D) and Argentina will square off against Australia (Pool A).