India scored through Harmanpreet Singh, Dilpreet Singh and Mandeep Singh while Kane Russell was the lone scorer for New Zealand. 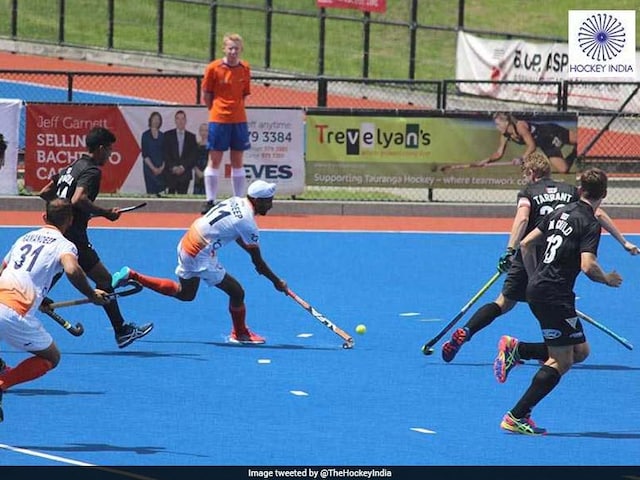 India outclassed hosts New Zealand 3-1 in the third match of the Four Nations Invitational hockey tournament on Saturday to set up their summit clash against Olympic silver medallist Belgium on Saturday. India scored through Harmanpreet Singh, Dilpreet Singh and Mandeep Singh while Kane Russell was the lone scorer for New Zealand. Belgium, on the other hand, sealed their berth after beating Japan 4-1.

New Zealand needed at least a draw to progress to the summit clash but World No.6 India proved too hot to handle. India went ahead in the second minute after the pushback via Harmanpreet who converted a penalty corner in the beginning of the first quarter. Dilpreet (21') then sliced open their defence to double India's lead in the second quarter.

Trailing 0-2 after the first half, New Zealand improved their game after the change of ends. They tried breaking through a stubborn Indian defence but were denied.

However, Russell (45') found an opening in the third quarter when he struck home through a penalty corner. New Zealand had cut down India's lead to just one goal.

However, striker Mandeep ended Black Sticks' hopes of a late comeback when he sounded the board in the 47th minute with India recording their second victory in three games.

"We started the match much better today and I saw individual improvement. It's important for the players to keep pushing themselves," chief coach Sjoerd Marijne said after the match.

"I am particularly happy about today's win because the team did a lot of analyzing ahead of the match and their keenness to improve was evident in today's match.

On his thoughts about playing Belgium on Sunday, the 43-year-old Dutchman said: "This tournament is about improving our play and we already played a good match against a full-strength Belgium side so the final will be challenging too."

"But every match, this team has shown progress and have gotten better with performance so in the final too we can expect a close contest," he added.

However, they went down 0-2 to world no.3 Belgium in their second game on Thursday before sealing the final spot by beating the hosts on Saturday.