Charlie Woods, the youngest player taking part in this year's exhibition tournament featuring 20 teams, shocked many with his controlled swings at such a tender age. 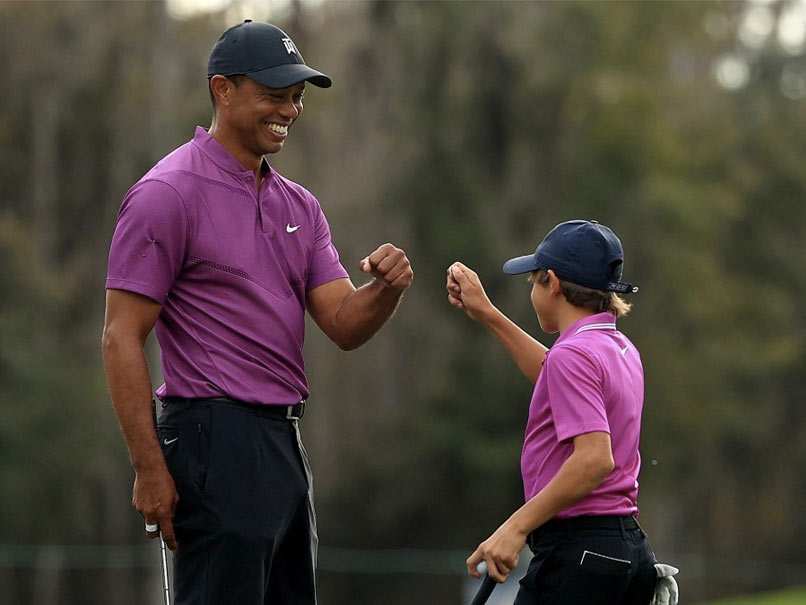 Tiger Woods and his won are four shots off the top spot after the first round.© AFP

Legendary golfer Tiger Woodsand his son Charlie paired up for the PNC championship family tournament, being played in Orlando, Florida. While all the focus was on the 15-time major champion, it was his 11-year-old son Charlie who stole the limelight with an impressive eagle for Team Woods. Charlie, the youngest player taking part in this year's exhibition tournament featuring 20 teams, shocked many with his controlled swings at such a tender age. Charlie's shots and mannerisms created a buzz on social media, with many fans and celebrities taking to Twitter to express their excitement. NBA legend LeBron James was among many who couldn't keep their excitement within themselves and wrote: "This is so !!!!!!!!! Love to see it".

A day they won't soon forget.

Highlights from Tiger and Charlie Woods' 10-under 62 at the @PNCchampionship on Saturday. pic.twitter.com/r7GDNnPb3F

Charlie Woods was striping it off the tee Saturday. pic.twitter.com/xP5LzLo8Ia

Charlie put his drive in the fairway at the par-five third hole of the Ritz-Carlton Golf Club, then hooked a five-wood approach around some trees.

The ball bounced short of the green and settled three feet from the pin, Charlie giving a fist-pump just like his old man's before rolling in the putt.

A beaming Woods had a hug for his son, noting as they walked off the green, "First eagle!"

Not just fans on social media, Charlie even amazed his legendary father with some of his "incredible shots".

"It was some of the most incredible golfshots," Woods said with a laugh.

"He had the best time to be out there in this environment. I've seen this all along. A lot of the shots he hit I've seen this entire year, " he added.

He indeed was having fun and here's the proof:

The Woods duo got off to a hot start, with six birdies and an eagle on the front nine. They combined for a 10-under 62 that left them sharing sixth, four shots behind Matt Kuchar and son Cameron.

Tiger Woods was not concerned about their current position in the championship and has stressed since the start of the tournament that his main aim was to make sure that his son "has the time of his life".

"I really don't care about my game. I'm just making sure that Charlie has the time of his life and he's doing that. I'm making sure he is able to enjoy all of this," Woods said.

Comments
Topics mentioned in this article
Tiger Woods Golf
Get the latest updates on ICC T20 Worldcup 2022 and CWG 2022 check out the Schedule, Live Score and Medals Tally. Like us on Facebook or follow us on Twitter for more sports updates. You can also download the NDTV Cricket app for Android or iOS.