No side before had rallied to win on the last day after trailing for three days, further cementing the reputation of Tiger Woods, who went undefeated in his three matches. 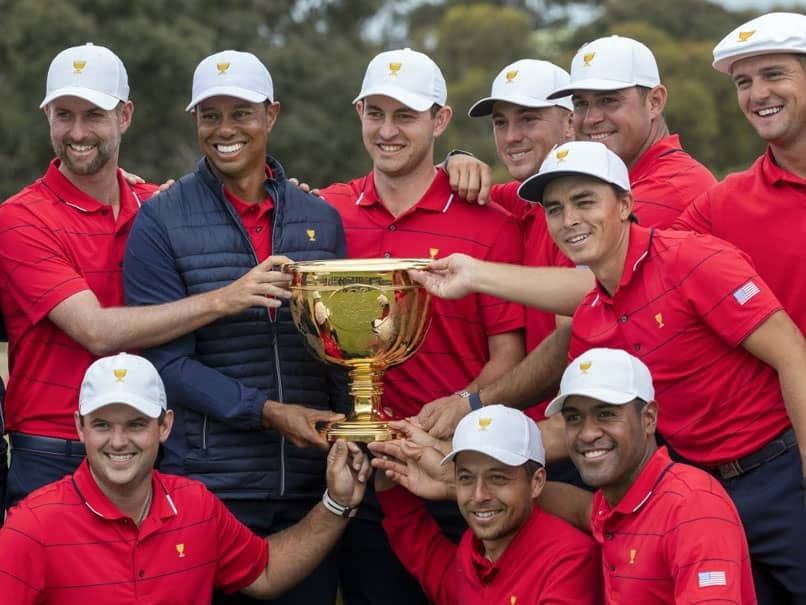 US produced a stunning turnaround to deny the Internationals a first Presidents Cup in 21 years.© AFP

Tiger Woods' United States produced a stunning turnaround to deny the Internationals a first Presidents Cup in 21 years Sunday, dominating the singles on a tense final day that went to the wire at Royal Melbourne. Veteran Matt Kuchar was the hero, with his winning putt on the 17th in the penultimate match enough to ensure victory, sparking wild celebrations from playing-captain Woods, who set the tone by getting the first point on the board. It was a crushing loss for Ernie Els' young Internationals who led for the first three days of the biennial matchplay event.

They went into Sunday's 12 singles matches with a 10-8 lead but Patrick Reed and Dustin Johnson were among those racing to big early leads as the scoreboard became swathed in US red.

Webb Simpson beat South Korea's An Byeong-hun to guarantee the US a share of the Cup at 15-12 with three matches still in play.

Australian Cameron Smith grabbed a point by beating Justin Thomas, ensuring a nail-biting finale with Kuchar's birdie to go one-up on 17 enough to secure at least half a point and ensure there was no way back for Els' team.

"I trusted all my 11 guys. I trusted them implicitly. I told them from the very get go. They went out there and got the points we needed. We fought," said Tiger Woods.

"Even the points we lost, we were making them earn every one of them, and this Cup wasn't going to be given to us. We had to go earn it, and we did."

No side before had rallied to win on the last day after trailing for three days, further cementing the reputation of Woods, who went undefeated in his three matches.

"Congratulations to Tiger and the entire U.S. Team on a great comeback and tremendous WIN. True Champions!" he tweeted.

The playing-captain, in his ninth Presidents Cup, took the responsibility of going out first in the singles and won 3 and 2 against battling Mexican Abraham Ancer.

In doing so he passed Phil Mickelson to become the most successful Presidents Cup golfer in history with a 27-15-1 win-loss-tie record to his countryman's 26-16-13.

"I could have made different choices in the singles today. I can take it on my shoulders," said Els.

"The questions will come that I made mistakes in the selection of where I put my players, but I followed a plan 100 percent, and it didn't quite work out. But we came damn close."

At one stage the Americans were ahead in nine matches, and world number five Dustin Johnson ensured a second point, crushing Li Haotong 4 and 3.

It ended a difficult Presidents Cup for the first Chinese player to take part -- Li was overlooked for the opening two days and never looked at ease.

Patrick Reed's caddie was banned after shoving a fan on Saturday as tensions boiled over following the controversial American's penalty for improving his lie in the Bahamas last week.

The former Masters champion turned to his swing coach to carry his bag and raced to six-up through seven holes against Taiwan's CT Pan in front of taunting fans before closing out a 4 and 2 win.

The US were on a roll and Tony Finau came from four down after 10 holes to snatch a half point on the final green against a stunned Hideki Matsuyama of Japan.

South Korea's Im Sung-jae was a bright spot. Only 21, the PGA Tour Rookie of the Year comfortably beat US Open champion Gary Woodland 4 and 3.

It was the United States' 11th victory in 13 editions of the event. One was drawn with the lone International win coming in 1998, also at Royal Melbourne.

Comments
Topics mentioned in this article
Tiger Woods Ernie Els Golf
Get the latest updates on India vs England Series, India vs England , live score and IPL 2021 Auction . Like us on Facebook or follow us on Twitter for more sports updates. You can also download the NDTV Cricket app for Android or iOS.