International team captain Ernie Els is keen to "kick the asses" of Tiger Woods and his United States teammates at the Presidents Cup. 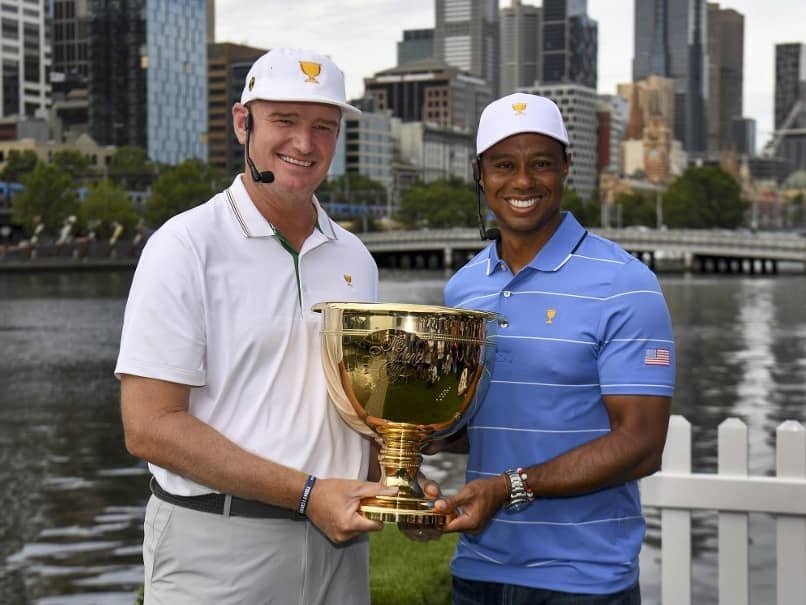 Ernie Els and Tiger Woods have a decade-long rivalry.© AFP

Ernie Els and Tiger Woods have a decades-long rivalry and the big South African admitted Tuesday he was itching to outmaneuver his old sparring partner at the Presidents Cup. The two have shared plenty of golfing memories, including the 1998 edition of the biennial team matchplay event at the same Royal Melbourne course -- the only time the Internationals have won in the 25-year history of the Presidents Cup. Now team captain, Els is keen to "kick the asses" of Woods and his United States teammates once again.

"He's not a bad golfer," Els said of Woods, who is the first playing captain since American Hale Irwin in 1994. "He's one of the best, the best of my generation. It was a privilege to compete against him

"A lot of tournaments come through my mind now where I've came close and lost to him, but there was a couple where I got him.

"Where the game of golf has gone in the last 25 years is just remarkable, and it could not be where it is today if it wasn't for Tiger Woods," he added.

"So with all that being said and done, you know, we'd like to kick their asses this week here at home."

To emulate the Peter Thomson-led winning team of 1998, Els will need to use all his knowledge of the world-renowned sandbelt courses, drawing on his course record 12-under-par 60 at Royal Melbourne set in 2004.

'Got to earn every point'

Els might have has seven rookies in his young team, but he also has veteran Australian Adam Scott, another with intimate knowledge of the course.

"Between me and Scotty, we've played the most Cups on our side. I've played under numerous captains, great captains," he said.

"We've just got to play enough rounds around here to get to know the course better for their sake. And maybe they listen to me, you never know. That would be nice.

"But I've got a great young team. I've got some experienced players. You know, guys are naturally just standing up; guys who are quite comfortable to speak and I like that. I like the spirit we have this week."

Along with Scott, who is playing in his ninth Presidents Cup, Louis Oosthuizen, Marc Leishman, Hideki Matsuyama and Adam Hadwin are the only others with experience of the event among the Internationals.

Like Els, Woods is desperate to win to cap off an amazing year that saw the 43-year-old bounce back from injury to win his 15th major at the US Masters and then match Sam Snead's all-time record of 82 PGA Tour wins at October's Zozo Cup in Japan.

"Ultimately, that's up to us as players and our vice captains who do a lot of work between now and Sunday for us to hoist that trophy," he said.

"Do I want that to happen? Hell, yeah. All the guys do.

"But we've got our work cut out for us. We've got a great squad we're going against, and we've got to go out there and earn each and every point."

Comments
Topics mentioned in this article
Ernie Els Tiger Woods Golf
Get the latest updates on IPL 2021, IPL Points Table , IPL Schedule 2021 , live score . Like us on Facebook or follow us on Twitter for more sports updates. You can also download the NDTV Cricket app for Android or iOS.