Watch: Last-Minute Stunner Gets Footballer A Kiss From Teammate

Wrexham vs Stockport, FA Trophy: Things took a funny turn when a teammate kissed the goal scorer on his lips after a spectacular goal in a professional football match. 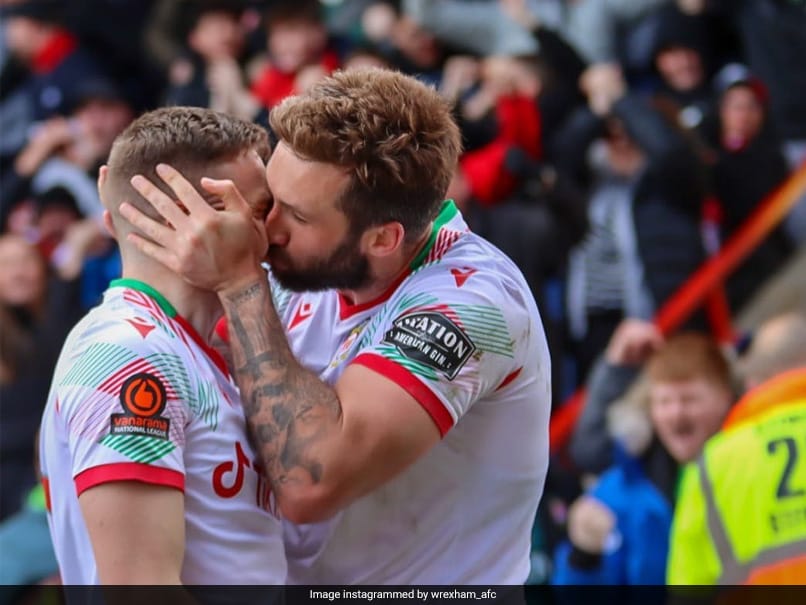 Two players kissed in front of a huge crowd.© Instagram

Unique goal celebrations after scoring screamers have become quite a popular and signature move for many professional footballers. The excitement to celebrate with or in front of a huge crowd makes players do unthinkable stuff. Something similar happened in a match between Wrexham AFC and Stockport County in the FA Trophy in England recently when a late injury-time stunner by Paul Mullin, a lob over the goalkeeper, sent the fans and teammates in a tizzy. Mullin's teammate Ollie Palmer ended up kissing him on the lips.

This passionate moment between two professional players, initiated by Palmer, was shared and praised by Wrexham's official Instagram handle with a caption that said:

"We were all feeling the love for @paulmullin12 after that first goal yesterday!."

The 91st minute goal by Mullin wasn't the only goal of the match. After Mullin put Wrexham 1-0 ahead, he got onto the scoresheet again four minutes later to hand the Ryan Reynolds-owned team a 2-0 victory.

The fans at the The Racecourse Ground went berserk and were seen chanting slogans and lifting banners to celebrate their qualification to the final.

The win also ended Stockport's 21-game unbeaten run and put Wrexham in the final which is scheduled to be played at the Wembley Stadium.