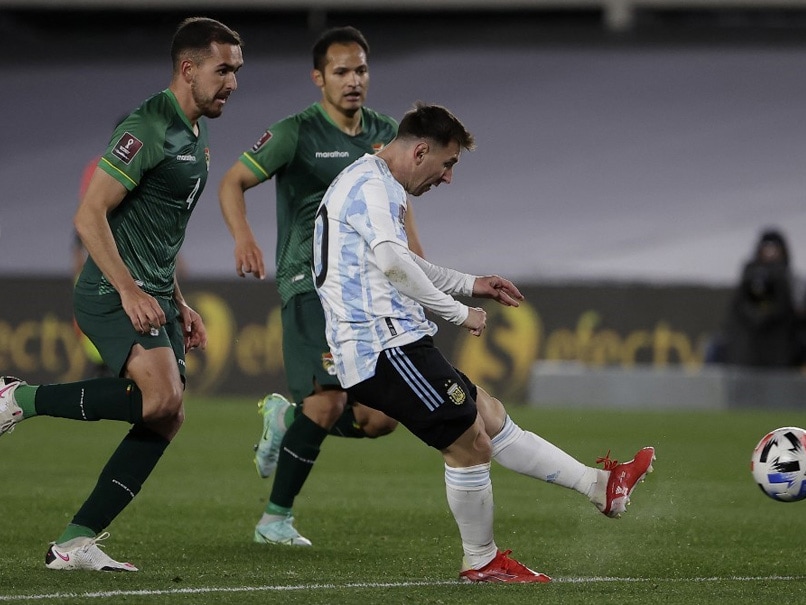 Lionel Messi was in a class of his own during Argentina's 3-0 victory against Bolivia on Thursday (local time), at the Monumental Stadium in Buenos Aires. The Argentine captain scored all three of his team's goals during the 2022 FIFA World Cup qualifier, opening his hat-trick in the 14th-minute with a brilliant effort. Receiving the ball around 30 yards away from the opposition goal, the 34-year-old had his back towards goalkeeper Carlos Lampe. Slaloming past players in his typical style, he nutmegged defender Luis Haquin with ease and then unleashed a stunning left-footed shot, which gave the goalkeeper no chance.

He then ran towards the corner flag, kissing Argentina's logo on his jersey and went on to celebrate with his teammates.

Here is the goal:

THIS NUTMEG, THE ICE COLD FINISH, THE CELEBRATION, THE STADIUM SCREAMING MESSI, THE SEVERAL ANGLES..

The Paris Saint-Germain attacker scored his second in the 64th-minute, exchanging quick passes with Lautaro Martinez and then dribbling past a defender to score past Lampe once again.

He then completed his hat-trick in the 88th-minute, scoring via a rebound.

Argentina are currently second in the CONMEBOL table for the 2022 World Cup qualifiers, with 18 points from eight games. The Lionel Scaloni-managed side has registered five wins and three draws.