Felix Afena-Gyan received a pair of trainers as a gift from Roma head coach Jose Mourinho after scoring a brace against Genoa on Sunday. 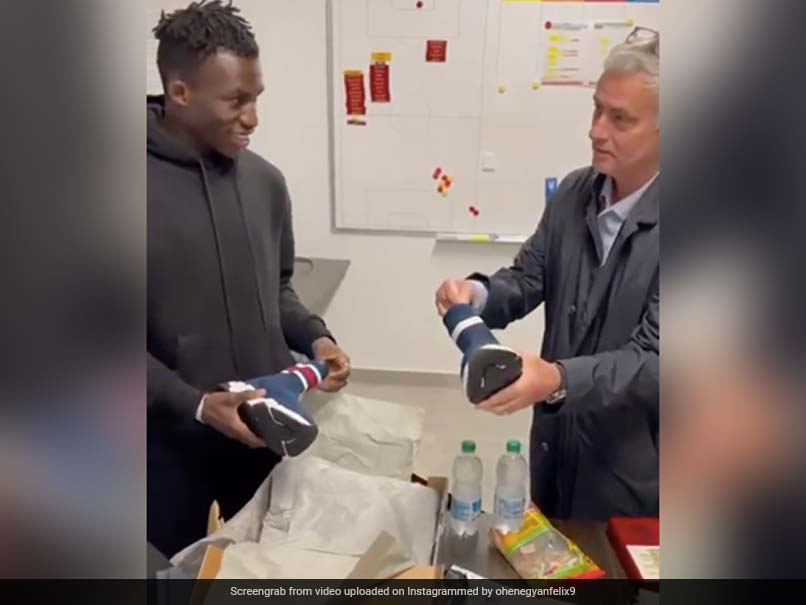 Felix Afena-Gyan scored his first goal in Serie A when the Roma forward came on as a 75th-minute substitute against Genoa. Gyan's goal helped break the deadlock and the youngster went on to add another to help his team win the match 2-0. The AS Roma prodigy made an instant impact and scored his first goal in the 82nd-minute with a bottom corner effort. He completed his brace in stoppage-time, scoring a long-range screamer which found its way past goalkeeper Salvatore Sirigu into the top corner. After the match, Mourinho revealed that he had promised to buy the 18-year-old new pair of trainers for 800 euros and that the youngster reminded him of it after his great perfomance. Speaking to broadcaster DAZN after the match, the Roma head coach said, "I promised him a very expensive pair of shoes, for 800 euros, and he came to me to make sure I didn't forget".

The former Chelsea, Real Madrid and Manchester United manager lived up to his promise to Gyan and presented him with the shoes on Monday.

The Ghana native shared the moment on Instagram and captioned it as, "Forever grateful Sir I'll make you proud."

Gyan joined Roma's youth team on March 2021 and his quick rise to stardom has been a treat to watch for football fans. According to reports, the youngster was playing for his high school team just a couple of months ago in Ghana.

Roma Football Social Jose Mourinho
Get the latest updates on IPL Auction 2023 and check out  IPL 2023 and Live Cricket Score. Like us on Facebook or follow us on Twitter for more sports updates. You can also download the NDTV Cricket app for Android or iOS.