It was a match between two weakened teams, but the strength in depth of Arsenal, FA Cup winners in 2014 and 2015, ensured the visitors won out. 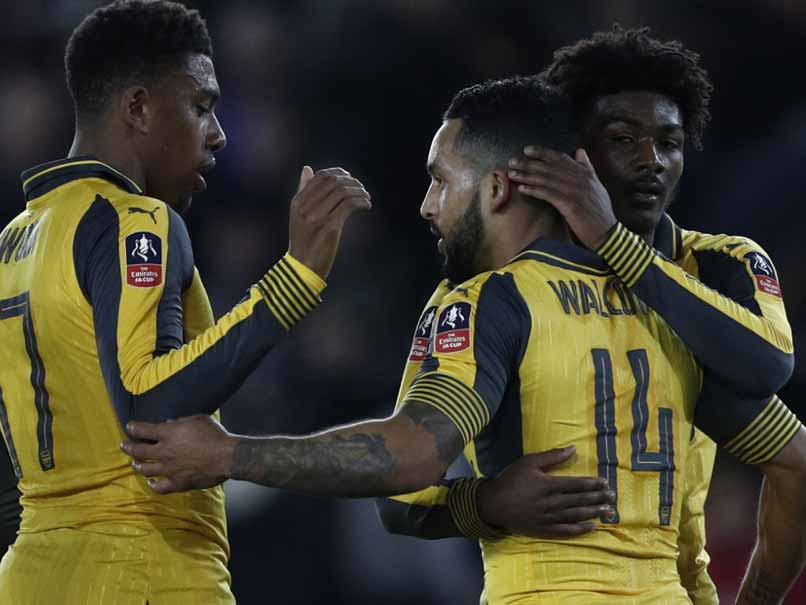 Arsenal thrashed Southampton 5-0 in the fourth round of the FA Cup.© AFP

Theo Walcott struck a hat-trick against his former club after Danny Welbeck scored twice on his first start since a knee injury in May as Arsenal thrashed Southampton 5-0 in the fourth round of the FA Cup at St Mary's on Saturday.

It was a match between two weakened teams, but the strength in depth of Arsenal, FA Cup winners in 2014 and 2015, ensured the visitors won out.

Arsenal manager Arsene Wenger will have been especially pleased with the performance of Welbeck, who had not started since a 2-2 draw away to Manchester City in May.

It was only the Gunners' second win at St Mary's in seven attempts and was sweet revenge for a 4-0 defeat at the south coast ground in the Premier League last season.

Welbeck put Arsenal ahead with his first goal since the winner in a 1-0 victory over Norwich on April 30 last year and added a second before Walcott got in on the act before the break, adding two more in the second half.

Both managers made 10 changes to the teams that started their previous matches, with Southampton having reached the League Cup final after a strenuous midweek tie against Liverpool at Anfield.

Only young central defender Jack Stephens kept his place, while goalkeeper Harry Lewis, whose only previous first-team games for the Saints had been made in the third-round tie and replay against Norwich City, replaced Fraser Forster ahead of regular second-choice Stuart Taylor.

The relative strength of the two line-ups was plain and Wenger, serving the first match of his four-game touchline ban for pushing fourth official Anthony Taylor during the 2-1 victory over Burnley, was able to relax in the directors' box.

Arsenal's Jeff Reine Adelaide had an early shot blocked before Lucas Perez, found in plenty of space on the left by Welbeck's pass, hit his shot beyond the far post.

Alex Oxlade-Chamberlain was next to line up a shot, but his effort went well wide.

An Arsenal goal seemed inevitable and it duly arrived in the 15th minute.

The outstanding 19-year-old Ainsley Maitland-Niles, in a deep midfield role on only his fourth first-team start for Arsenal, played a pass forward to Perez, whose flick found Welbeck running clear of the defence to chip the ball over Lewis and in off the crossbar.

Six minutes later the England forward was celebrating again. Oxlade-Chamberlain's long forward pass found him making up three yards on Stephens, taking the dropping ball away from the defender with his first touch and rolling a left-foot shot gently past Lewis with his second.

Saints looked for a swift reply but Pierre-Emile Hojbjerg volleyed over the bar in the 35th minute and 60 seconds later Shane Long got goal-side of Rob Holding and blasted a shot towards the top near corner only for a leaping David Ospina to palm the ball away.

Shkodran Mustafi should have made it 3-0 when he glanced a header wide from a free-kick but the Gunners extended their lead anyway in the 35th minute as Welbeck turned provider.

Saints gave the ball away as Stephens's attempted clearance rebounded off Hojbjerg to Welbeck.

He in turn exchanged passes with Perez and crossed low into the middle where Walcott got ahead of Sam McQueen to score.

Southampton manager Claude Puel sent on substitutes Dusan Tadic and Nathan Redmond but it made little difference and instead it was an Arsenal's substitute, Alexis Sanchez, who created the next goal in the 69th minute.

Delaying his run to stay onside, he took a pass from Oxlade-Chamberlain on the right and cut the ball back for Walcott to shoot into the corner.

Walcott then rubbed salt in the Saints wounds as he side-footed calmly home six minutes from time to complete his hat-trick after Sanchez, running down the left, had rolled the ball across the penalty area.

Comments
Topics mentioned in this article
Arsenal Southampton Football Theo Walcott
Get the latest updates on Fifa Worldcup 2022 and check out  Fifa World Cup Schedule, Stats and Live Cricket Score. Like us on Facebook or follow us on Twitter for more sports updates. You can also download the NDTV Cricket app for Android or iOS.