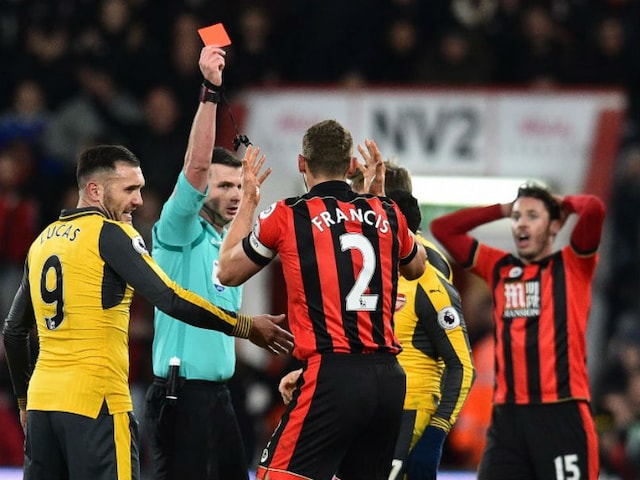 Bournemouth will appeal against the red card shown to captain Simon Francis, who was sent off during the thrilling 3-3 draw against Arsenal in the Premier League, the club confirmed on Wednesday.

The Bournemouth skipper was shown a straight by referee Michael Oliver in the 82nd minute for his challenge on Arsenal midfielder Aaron Ramsey.

Bournemouth were leading 3-2 at the time but Olivier Giroud equalised in stoppage time to earn for Arsenal a draw.

"CAF Bournemouth have appealed against Simon Francis' red card after the defender was sent off during Tuesday's match with Arsenal. The club will hear the outcome by the end of the week," the club said in a statement on their website.

If their appeal fails Francis will miss the next three games, the FA Cup third round tie with Millhall and Premier League matches with strugglers Hull City and Watford.

Comments
Topics mentioned in this article
Bournemouth Arsenal Simon Francis Olivier Giroud English Premier League Football
Get the latest Cricket news, check out the India cricket schedule, Cricket live score . Like us on Facebook or follow us on Twitter for more sports updates. You can also download the NDTV Cricket app for Android or iOS.
Advertisement