Fernando Torres sustained the injury hours after the Football Association announced that he will not face punishment for scratching Tottenham Hotspur's Jan Vertonghen during Saturday's 1-1 draw in the Premier League. 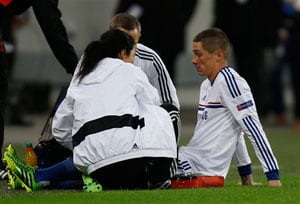 Chelsea manager Jose Mourinho played down the gravity of the knee injury that forced striker Fernando Torres off during the London club's 4-0 win at Steaua Bucharest on Tuesday.

The Spaniard, making his third consecutive start, lasted only 11 minutes of the Champions League Group E game in Bucharest before being replaced by Samuel Eto'o.

However, Mourinho said that he had been reassured by the club's medical director, Paco Biosca, that the injury was not as bad as the one that recently saw Dutch midfielder Marco van Ginkel ruled out for six months.

"I was surprised because I saw him slide, I thought it was an ankle. It's not an ankle, it's a knee," Mourinho told Sky Sports.

"So we have to wait. Tomorrow (Wednesday) we will have the scans and we will see what happens.

"I hope it's not one more dramatic like Van Ginkel. Doc Biosca says not to be so worried, because it will not be a Van Ginkel situation."

Torres sustained the injury hours after the Football Association announced that he will not face punishment for scratching Tottenham Hotspur's Jan Vertonghen during Saturday's 1-1 draw in the Premier League.

Torres was sent off later in that game after being shown a second yellow card for leading with his arm in an aerial challenge with the same player.

Mourinho applauded the FA's stance, saying: "It doesn't surprise me because the FA represents the English football and in English football, you never punish emotion and aggressivity.

"You punish when somebody doesn't respect the integrity of the game by cheating, by simulating. And the FA defended what is the nature of English football and the fair play in English football."

Beaten 2-1 by Basel in their opening Champions League game, Chelsea bounced back against Steaua through a Ramires brace, an own goal by Daniel Georgievski and a late Frank Lampard strike.

Comments
Topics mentioned in this article
Football Aston Villa Liverpool Barcelona Atletico Madrid Spain Croatia John Terry Fernando Torres
Get the latest updates on ICC T20 Worldcup 2022 and CWG 2022 check out the Schedule, Live Score and Medals Tally. Like us on Facebook or follow us on Twitter for more sports updates. You can also download the NDTV Cricket app for Android or iOS.