Hugo Boumous was the catalyst in FC Goa's dominant 4-1 win against Hyderabad FC. 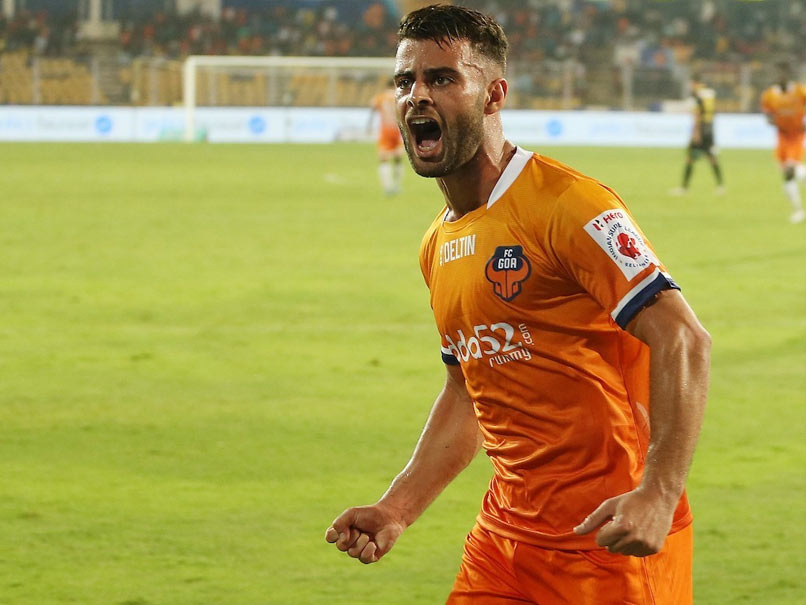 Goa are now three points clear at the top with 33 points from 16 matches.© ISL

With two goals and an assist, Hugo Boumous was the catalyst in FC Goa's dominant 4-1 win against Hyderabad FC at the Jawaharlal Nehru Stadium on Wednesday. Braces from Boumous (19', 50') and Ferran Corominas' (64', 87') helped Goa pull three points clear at the top with 33 points from 16 matches. Marcelinho's (64') free-kick strike was nothing more than a consolation for Hyderabad who remain bottom of the table with six points.

The spotlight was on the Gaurs after they sacked Sergio Lobera in the build up to the game. But Derrick Pereira's charges started right where they left off. The win makes FC Goa the first team this season to confirm qualification for the playoffs.

Corominas was set up with a golden chance to break the deadlock eight minutes into the first half as FC Goa started on the front foot. Boumous released Jackichand Singh down the right flank and the winger's cross to the centre was hit straight at Hyderabad goalkeeper Laxmikant Kattimani by Corominas from point blank range.

With no support available, Marcelinho tried to create something for Hyderabad when he picked up the ball near the half-way line before dribbling into the box past the Goa defence. The Brazilian forward was on his own inside the box and could only find the side-netting.

A minute later, Goa converted their dominance into an opening goal. After Brandon Fernandes' corner-kick was cleared by Mathew Kilgallon, the ball fell to Mandar Rao Dessai who attempted a long-range effort from outside the box. The left-back scuffed his shot but Boumous slammed home the loose ball from inside the box.

Marcelinho came close to scoring again at the other end but missed out on an immediate equaliser. A minute after conceding, a Stankovic corner was side-footed onto the post by the Brazilian.

Boumous' fine form in front of goal continued as the Frenchman scored his eighth goal of the season just five minutes after the restart. He picked up the ball on the left flank, dribbled into the box unopposed and curled a shot into the corner of the net.

Marcelinho, who looked to be the only likely scorer for the visitors, executed a free-kick strike to perfection after the hour-mark. Ahmed Jahouh's tackle on the Brazilian outside the box was punished with a fantastic effort into the net through the gap in the Goa wall.

Goa were unfazed by the goal against the run of play and regained their two-goal cushion within minutes. Hugo Boumous played an excellent, defence-splitting through ball into the path of Corominas who timed his run in behind the defence to perfection and caressed the ball past Kattimani into the net.

The hosts put the game to bed after Kattimani fouled Corominas from behind and conceded a late penalty. The Spaniard slotted home from 12 yards to send the visitors packing.