Asian champions Japan were welcomed into their Florida beachfront resort Sunday as players try and adjust their bodies to the hot and humid conditions they will face when they arrive in Brazil next Saturday for the FIFA World Cup. 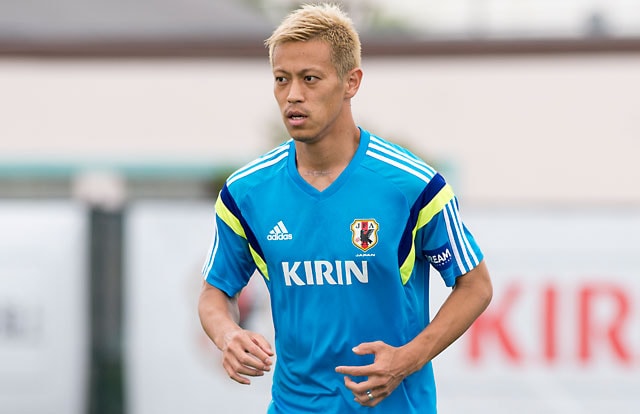 The Asian champions were welcomed into their Florida beachfront resort Sunday as players try and adjust their bodies to the hot and humid conditions they will face when they arrive in Brazil next Saturday.

"It's not easy to play our best in the World Cup so we have to adjust to this temperature and humidity," Zaccheroni said. "The climate is the same as Brazil. Plus I like the beaches."

The Italian bench boss, who guided AC Milan to a pair of Serie A titles, also likes Manchester United forward Kagawa and AC Milan striker Honda, but he plans to work them into shape in friendlies against Costa Rica and Zambia on Friday at nearby Tampa.

"Honda, as well as Kagawa and others who didn't have enough playing time in Europe, we will have to check them and their condition very carefully."

Kagawa welcomes the challenge the US training week brings.

"I have a strong will for this championship and I should be the one to lead the team," he said. "As time is limited, I can't do any special preparation, but I am determined to prepare mentally and physically and get myself ready with the best condition for the first match."

Japan will compete in Group C at the World Cup against Colombia, Greece and Ivory Coast, opening against the African side on June 14.

Honda was contained by Cyprus in Japan's 1-0 victory in a sendoff friendly, but Zaccheroni was confident the blond finisher will be ready for the World Cup.

"I believe he understands my expectations," Zaccheroni said. "We will focus on the actual World Cup matches together."

Japan's World Cup warm-up foes include teams with similar styles to their Brazil foes, including former Colombian coach Jorge Luis Pinto guiding Costa Rica, but Zaccheroni downplayed the edge his side might offer for the Ticos, who have Italy in their group.

"Even though I'm Italian, we have a lot of different systems and strategies differ with the coach, so I'm not sure how the strategies can help you for the national team," Zaccheroni said.

Wins not the main goal

Zaccheroni also stressed that improving fitness and monitoring playing time will be greater concerns for him than winning friendlies.

"I'm trying to focus on the players' condition and playing time during the game instead of a good result, to prepare the best for the World Cup," he said.

"I understand people expect the good results but I have to respect the players' condition and playing time so they can play their best at the World Cup. This is what we want most in the match."

But accurate passing and team concepts are becoming a bigger piece of Japan's work this week ahead of specific notes on opponents next week.

"We're shifting from simple physical intensity to strategy and team concepts," Zaccheroni said. "We will provide the players information about opponents gradually."

Passing drills between groups of 10 players to emphasize teamwork and accuracy were part of Sunday's early training session, with signs in English and Japanese on the fences around the field exhorting the Blue Samurai to "Be the Best in the World -- believe in just one dream together."

"He has been separated from the team," Zaccheroni said. "I hope there is no severe problem for him."