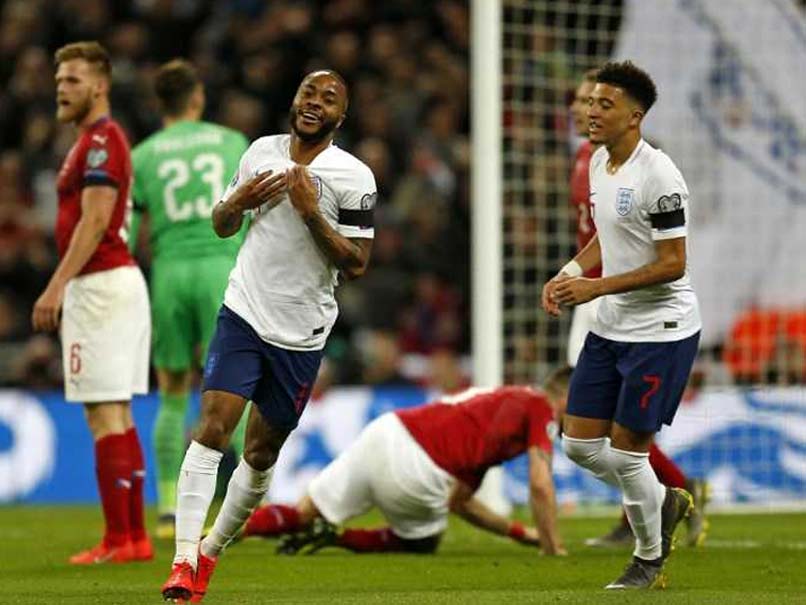 Raheem Sterling showed that he is coming of age on the international stage as his hat-trick saw England start their Euro 2020 qualifying campaign by hammering the Czech Republic 5-0, while Antoine Griezmann inspired France to a battering of Moldova. Manchester City attacker Sterling had scored just two goals in his first 45 caps, but he now has five in his last three international appearances following Friday's treble, which helped England storm to the top of Group A ahead of Monday's trip to Montenegro, who drew 1-1 at Bulgaria.

Sterling opened the scoring in the 24th minute when he tapped home Jadon Sancho's cross, and struck twice more in the second half to put the result beyond doubt after Harry Kane fired home his 21st England goal from the penalty spot.

"It was a beautiful team performance and I was happy to help the team get the win," Sterling said.

Sterling has 24 goals for club and country this term and his impressive form is a far cry from the dark days when he was vilified as England crashed out of Euro 2016.

"I'm just being confident in myself, I'm trying to get in areas and take shots, not to worry about anything," he added.

England carried the momentum from a run to the World Cup semi-finals and qualification for the last four of the Nations League into the Euro qualifiers and blooded young hopeful Sancho, who impressed on his full England debut.

The 18-year-old who has shone in the Bundesliga for Borussia Dortmund, gave England fans further cause for excitement, with his potential adding to that of Sterling and Kane coming into their prime.

"I thought Raheem was electric. He has looked like that all week in training. I'm pleased for him, it is a special night for him," coach Gareth Southgate said.

"I think he's really matured as a person and a footballer. He's hungry for goals and hitting things instinctively without thinking too much."

France also got off to a perfect start after an older head in Antoine Griezmann spurred the world champions on to a comfortable 4-1 victory at Moldova.

Griezmann opened the scoring with his 27th France goal in the 24th minute of their Group H encounter before crossing for Raphael Varane to double the scores three minutes later.

Olivier Giroud equalled David Trezeguet as Les Bleus' third highest scorer of all time with his 34th international goal nine minutes before the break and Kylian Mbappe completed the rout with three minutes left, before Vladimir Ambros claimed a late consolation for Moldova.

Griezmann would have had two more assists had Giroud and Paul Pogba been more clinical in front of goal, but France's display was easily enough for the three points and top spot in the group ahead of Iceland and Turkey, 2-0 winners against Albania and Andorra respectively.

"We played a very consummate first half in terms of control and attacking organisation. The second half was less fulfilling due to substitutions," said coach Didier Deschamps.

"We've opened our campaign well and the second game comes around quickly. In three days we have do it again."

Cristiano Ronaldo drew a blank on his return to international football after nine months away, as Ukraine battled to a goalless draw in Lisbon.

The draw was the first time Santos' side have failed to score at home in 19 matches and leaves them second in the group behind Luxembourg, who beat Lithuania 2-1.

William Carvalho had a fine header ruled out for offside in the 16th minute and Ronaldo, Pepe and Andre Silva all went close to opening the scoring, but Ukraine stopper Andriy Pyatov was on fine form to deny them.

In the end the away side could have snatched the three points through Junior Moraes, only for the debutant to fluff a golden chance to grab a shock win.

"We didn't play as we wanted to. We started slowly, not pressing the way we wanted," said Manchester City midfielder Bernardo Silva.

"The second half we tried to create chances to go after the game but unfortunately we didn't score."

Paul Pogba Football
Get the latest updates on IND vs NZ 2021, check out the Schedule and Live Score . Like us on Facebook or follow us on Twitter for more sports updates. You can also download the NDTV Cricket app for Android or iOS.