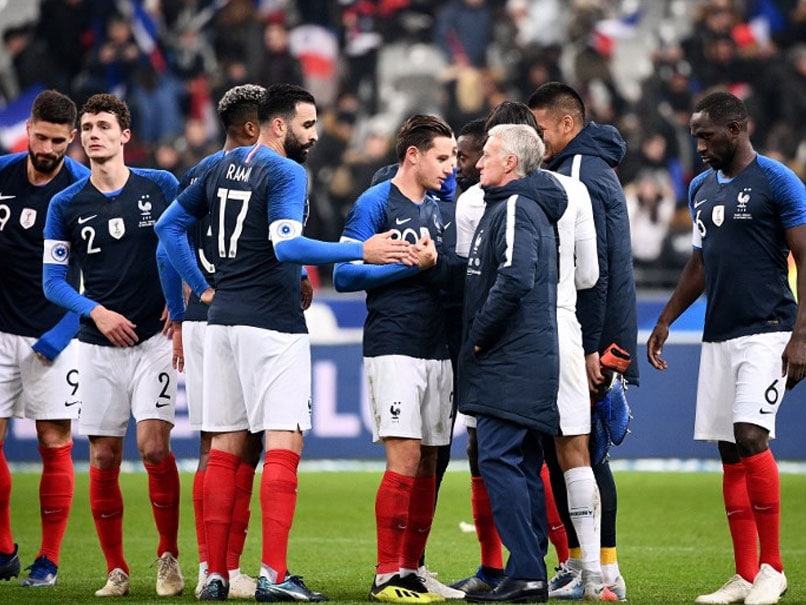 A shoulder injury to Kylian Mbappe overshadowed France's 1-0 friendly win over Uruguay at the Stade de France on Tuesday as Didier Deschamps' world champions ended the year on a high note. Mbappe had to be replaced in the first half after a nasty fall, continuing a miserable night for his Paris Saint-Germain coach Thomas Tuchel after the German had already seen Neymar hobble off injured early in Brazil's friendly with Cameroon in Milton Keynes.

PSG face Liverpool in a crucial Champions League clash at the Parc des Princes on November 28.

When asked if he could give "reassuring news" about Mbappe in his press conference, France coach Deschamps said: "Not necessarily reassuring, but not worrying either.

"He had some shoulder pain after his fall and he has to have tests tomorrow (Wednesday) morning, but there is no serious concern."

After the disappointment of seeing the Netherlands pip them to a place at the Nations League finals with a late Virgil van Dijk goal in Germany on Monday, Olivier Giroud's 52nd-minute penalty gave France victory in a repeat of the two teams' World Cup quarter-final meeting in Russia.

"It was important to finish on a positive note, even in the last defeat (by the Netherlands) saw us miss out on the (Nations League) semi-finals," Deschamps told M6.

Roared on by a large crowd in Paris, France opened up the Uruguay defence in only the fourth minute, but Giroud fired a first-time shot wide of the near post with just goalkeeper Martin Campana to beat.

Matias Vecino headed too close to Hugo Lloris as the visitors settled into the game, but Mbappe should have put France ahead when he raced clean through on goal, only to mishit a chipped effort well wide.

The 19-year-old was left writhing on the ground in pain after a heavy touch saw him tackled by Campana, appearing to sustain a shoulder injury as he crashed to the turf.

Mbappe tried to play on, but he only lasted a matter of seconds before signalling to the bench that he could not continue and was replaced by Florian Thauvin.

Chelsea striker Giroud wasted another good opportunity for the French shortly after the break, heading over from the edge of the six-yard box.

But he was given an even better chance to get on the scoresheet as Martin Cacares was penalised for handball after Antoine Griezmann's shot struck his chest and his arm.

Giroud stepped up and slammed a confident spot-kick into the bottom corner past Campana.

"We're a little disappointed not to be qualified in the Nations League, but it's like that," Giroud said. "We may have lost a game we shouldn't have, but we had the heart to react, and I think we did it pretty well."

The world champions started to play with more confidence, and Tanguy Ndombele forced the onrushing Campana into a good save after a wonderful scooped pass by Griezmann.

"We have to understand against whom we came to play in Europe - Brazil and France," said Tabarez. "I think the French were superior in the first 15 or 20 minutes, but after that it was relatively balanced in the second half."

Uruguay Football
Get the latest updates on SA vs IND 2021-22, check out the Schedule and Live Score . Like us on Facebook or follow us on Twitter for more sports updates. You can also download the NDTV Cricket app for Android or iOS.