Georginio Wijnaldum struck on the stroke of half-time and the dazzling Memphis Depay chipped home a cheeky stoppage-time penalty to bag a win in Rotterdam. 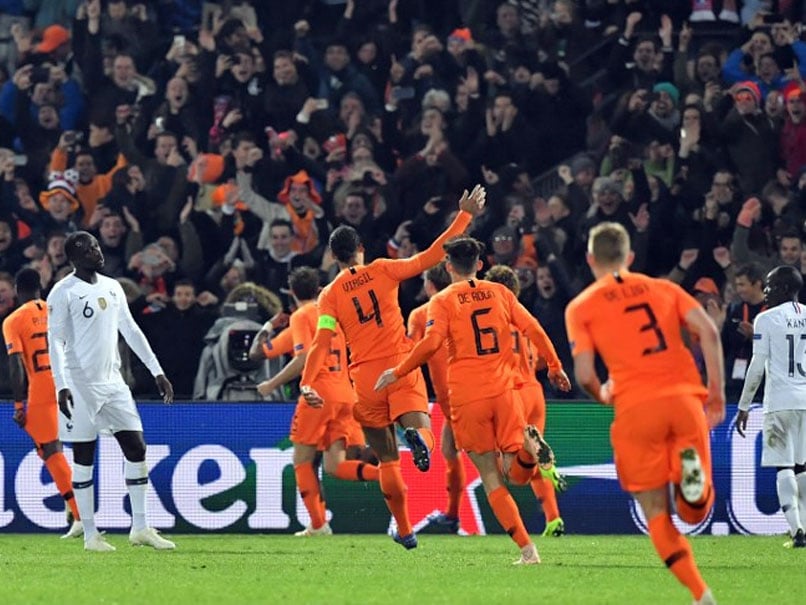 The Dutch are a point behind leaders France.© AFP

The Netherlands have qualification for the Nations League semi-finals in their sights after beating France 2-0 on Friday to hand Didier Deschamps' side their first defeat since winning the World Cup. Georginio Wijnaldum struck on the stroke of half-time and the dazzling Memphis Depay chipped home a cheeky stoppage-time penalty to bag a win in Rotterdam for Ronald Koeman's revitalised side that leaves the impressive Dutch needing just a point against relegated Germany on Monday to leapfrog France and make the semi-finals.

The Dutch are a point behind leaders France, who only needed a draw themselves on Friday to qualify for the knockout stage in their last match of the group but came up way short.

"I was not expecting a perfect match from our side but that's really what it was. We were very, very good," said Koeman.

"I was surprised by the France line-up and the way they played, but our match was perfect. We dominated the match for 90 minutes."

Wijnaldum's goal came practically at the midway point of a match dominated by the hosts, who have bounced back from the doldrums after failing to qualify for the World Cup.

They dominated the lacklustre world champions from the off and were only denied a even bigger win by a magnificent performance from France goalkeeper Hugo Lloris.

"This win shows the spirit of the team, the quality of the players we have," said Depay.

"It shows that we have a bright future, we have to continue like this. This is just the start."

The closest Deschamps' men came to scoring was a weak 10th-minute header from Antoine Griezmann, who was otherwise anonymous alongside the equally invisible Kylian Mbappe.

"There was one team out there with a lot of desire and we didn't have enough," said Deschamps.

"There was a clear gulf between the sides and they deserved the win... We weren't at the races and didn't show enough."

The Dutch meanwhile peppered Lloris' goal from the off, with Wijnaldum forcing the France keeper's first save with just a minute on the clock following an impressive burst from star turn Depay.

The match would have been done and dusted long before the final whistle had it not been for Tottenham stopper Lloris, who engaged in an almost personal battle with the Netherlands' vibrant front three of Depay, Ryan Babel and Steven Bergwijn.

"We played to the minimum of our potential and paid for it. The score could have been even more flattering for the Dutch," said Lloris, easily France's best performer.

"We have to ask questions of ourselves after and hope that the Germans beat them on Monday."

Depay was in particularly fine fettle, and the Lyon attacker was denied three times in the space of three second-half minutes by Lloris to stop the Dutch adding to their total.

First Lloris pushed away Depay's stinging free-kick in the 73rd minute, then two minutes later the Spurs man saved his bamboozled defenders with two smart saves from the striker in a matter of seconds.

France finally creaked into action not long after, but offered little going forward, and with the match rolling into injury time Lloris once again saved his team's blushes with a superb save from Frenkie De Jong's long-range strike following a rapid breakaway.

However De Jong, picked out by Deschamps on Thursday as one to watch for the Netherlands, helped his side seal the points when he was bundled down in the area by Moussa Sissoko with seconds left.

Depay stepped up and capped a brilliant individual and team display by clipping a panenka spot-kick over a despairing Lloris, announcing the return of the Netherlands to the big stage.

France Football
Get the latest updates on ICC T20 Worldcup 2022 and CWG 2022 check out the Schedule, Live Score and Medals Tally. Like us on Facebook or follow us on Twitter for more sports updates. You can also download the NDTV Cricket app for Android or iOS.