Sheffield United skipper Billy Sharp, who missed the second leg of the semi-final tie due to an injury, was blind-sighted by a charging supporter while he was standing near the touchline. 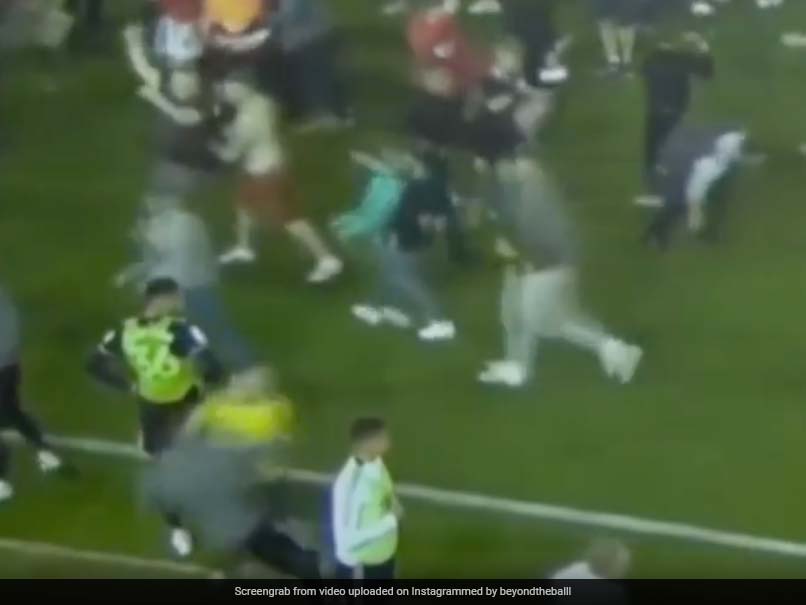 Billy Sharp was blind-sighted by a charging supporter after the Championship playoff tie.© Instagram

Nottingham Forest on Wednesday reached the final of the Championship playoffs after beating Sheffield United on penalties at the City Ground. However, Forest's jubilation of reaching a step closer to ending their 23-year absence from the Premier League was overshadowed by a pitch invader, who attacked former Forest player and Sheffield United captain Billy Sharp. Videos of the incident emerged on social media after fans invaded the pitch to celebrate Forest's win. Sharp, who missed the second leg of the semi-final tie due to an injury, was blind-sighted by a charging supporter while he was standing near the touchline.

Sharp also took to social media and said that he wouldn't let the incident "ruin the respect" he has for the Forest fans. He also congratulated them on reaching the playoff finals.

"One mindless idiot ruined what was an unbelievable night of football. Congratulations to Nottingham Forest on their victory and good luck in the final," Sharp said in an official statement.

As per a BBC report ,a 31-year-old man was arrested by the police in connection with this incident. He will remain in custody and will be interrogated by the officers.

Leading 2-1 from the first leg, Nottingham Forest scored early in the second leg through Brennan Johnson.

However, the Blades produced a brilliant fightback in the second half, scoring twice.

Morgan Gibbs-White pulled one back in the 47th minute before John Fleck made it 3-3 on aggregate, 15 minutes before end of regulation time.

The match then went to extra-time but both teams couldn't be separated.

However, Brice Samba saved three penalties to send Forest to the final, where they will face Huddersfield, who had earlier defeated Luton Town in the other playoff tie.

Comments
Topics mentioned in this article
Nottingham Forest Sheffield United Billy Sharp Football
Get the latest updates on ICC T20 Worldcup 2022, check out the Schedule and Live Score. Like us on Facebook or follow us on Twitter for more sports updates. You can also download the NDTV Cricket app for Android or iOS.