Bangalore girls want to bend it like Beckham in Canada

Nigerian coach training a group of under-15 girls who want to prove that football is not only a boys' game. 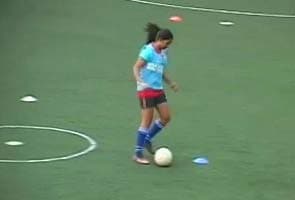 A quiet revolution is taking place on the playing fields of Bangalore. A group of under-15 girls is getting ready to show the world that Indian girls can and do play football. For the first time ever, a girls' team from India will be heading to the International Children's Games in Canada in mid-August. And they are honing their soccer skills in Bangalore right now.

One of the young players, Drithi, spoke of how people doubt their skills. "Well, a lot of guys say 'Oh can you play football?' or 'Boys are better' but if you play well and ensure that you are confident in playing, you can be better than them," she said.

The girls are training under Valentine Chika Okoli, a Nigerian professional who has made Bangalore his home. Okoli told NDTV, "They are really impressing me, they are picking up very well and we just have to keep polishing them up. I believe soon they will be shining bright. I think women's football is picking up and we just need support from the government and the federation."

Eight girls have been selected by the Bangalore Schools Sports Foundation for the five-a-side tournament.

Elvis Joseph, the founder-director of the BSSF said, "We have more than 40 teams in the schools of Bangalore city. That itself shows we've got a strong base. So, we just need to give them the opportunity and this is the right platform to take them to an international standard."

It will be a challenge for the Indian girls. Football is much stronger in competing countries and foreign players are physically bigger than Indian girls. But diminutive Keya says pluckily, "Well I have the advantage. I can like run through them, or like dodge them. They don't scare me!"

And yes, all the girls enjoyed the film 'Bend it Like Beckham' in which Jesminder, or Jess, shows the world that she has what it takes to play the beautiful game even if her family don't quite see the point.

Keya says, "It (the film) has a really positive message...Her family was against it but still she went out and convinced them and showed them this is what she wanted to do."

And Drithi said the film inspired her."She didn't let anyone stop her from playing football. So she did what she loved."