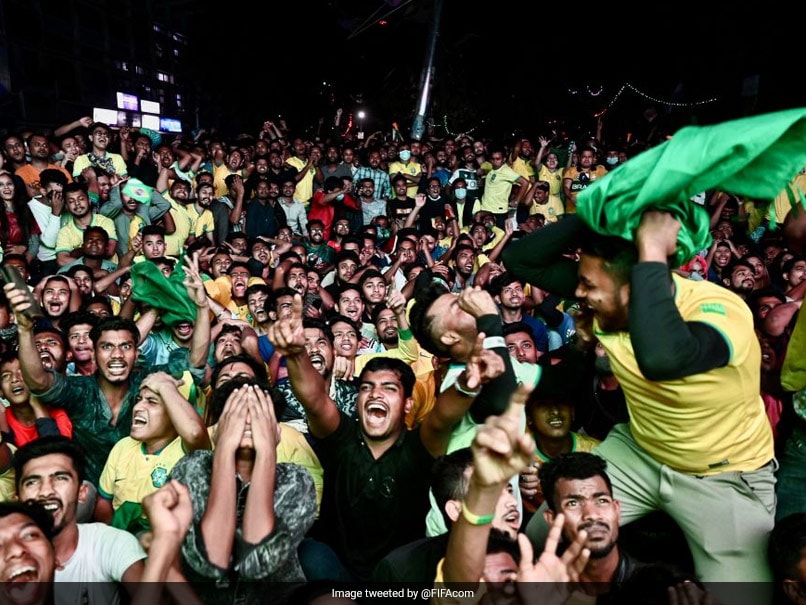 The FIFA World Cup is a month-log celebration for football fans around the world. It's not just about the football followers of the countries which play in the World Cup. Come the World Cup, and Indian football fans in Kerala, West Bengal, Goa and other places show their fervent support for the teams they adore. Same is the case in Bangladesh, where Brazil and Argentina have massive fan following. Recently, FIFA shared images of Dhaka where thousands of football fans assimilated to watch Brazil's Group G match against Switzerland on giant screen.

"Nothing brings people together like football. Huge crowds gathered in Dhaka, Bangladesh last night to see @CBF_Futebol beat @nati_sfv_asf in the #FIFAWorldCup," FIFA wrote in the tweet.

Five-time champions Brazil and Cristiano Ronaldo's Portugal joined France in the World Cup knockout rounds with a game to spare on a dramatic day of action in Qatar on Monday.

Portugal's match against Uruguay, which they won 2-0, was briefly interrupted a pitch invader who carried a rainbow flag and wore messages of support for war-torn Ukraine and Iranian women.

Manchester United playmaker Bruno Fernandes starred for Portugal, scoring with a cross-cum-shot early in the second half before converting an injury-time penalty.

Ronaldo wheeled away in celebration after the first goal but FIFA decided he had not touched the ball, denying him a ninth World Cup goal, which would have put him level with Portuguese great Eusebio.

Portugal booked their place in the knockout phase in Qatar hours after Brazil progressed, courtesy of a late goal from Manchester United midfielder Casemiro.

The Manchester United midfielder scored in the 83rd minute of Brazil's Group G match against Switzerland to give his side a 1-0 win at Stadium 974.

The Brazilians, missing the craft of their injured talisman Neymar, looked as though they would have to settle for a point after a Vinicius Junior strike in the second half was disallowed for offside.

But with seven minutes remaining, Casemiro volleyed home with the help of a slight but significant deflection off Manuel Akanji to break the resistance of the obdurate Swiss.

Does India Need A Safety Net In Batting?
Comments
Topics mentioned in this article

Argentina FIFA World Cup 2022 Football
Get the latest updates on IPL Auction 2023 and check out  IPL 2023 and Live Cricket Score. Like us on Facebook or follow us on Twitter for more sports updates. You can also download the NDTV Cricket app for Android or iOS.