Tottenham looked back in the groove as they swept aside Red Star Belgrade 4-0 in the Champions League in midweek for their first away win in any competition since May. 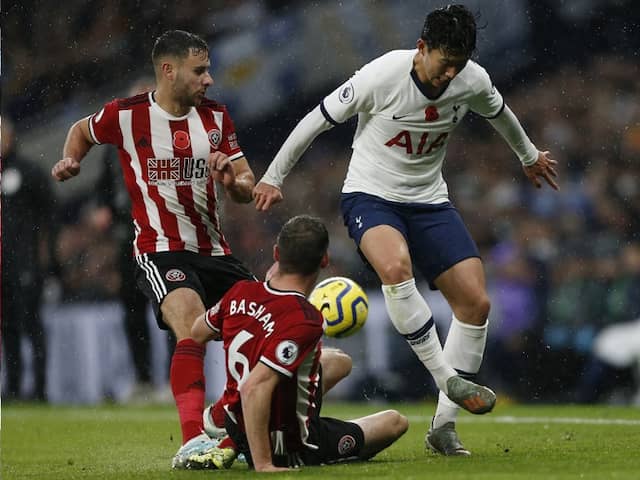 Son Heung-min's strike just before the hour mark threatened to get Spurs out of jail.© AFP

Tottenham surrendered a lead for the third straight Premier League game as Sheffield United moved up to fifth with a thoroughly deserved 1-1 draw at the Tottenham Hotspur Stadium on Saturday. Son Heung-min's strike just before the hour mark threatened to get Spurs out of jail, especially after a controversial VAR ruled out David McGoldrick's equaliser moments later. But George Baldock's cross that found a way through into Paulo Gazzaniga's net did survive a VAR review to level 12 minutes from time.

Tottenham looked back in the groove as they swept aside Red Star Belgrade 4-0 in the Champions League in midweek for their first away win in any competition since May.

However, Pochettino's men fell back into the bad habits that have characterised a poor Premier League campaign as they slip to 12th on the back of a run of two wins in 11 games.

Spurs defender Eric Dier was booked after just 75 seconds for clattering into Baldock and the former England international was lucky not to be sent off inside 20 minutes for another foul on McGoldrick.

Dier's unease was on show throughout a disjointed display from the hosts and they were lucky to escape on two occasions when John Lundstrum failed to turn home a dangerous low cross into the box before the midfielder smashed a shot off the post.

Son was free to play after his red card in the incident that saw Everton's Andre Gomes suffer a broken ankle last weekend was rescinded.

Once again the South Korean was by a distance Tottenham's most dangerous player and forced Dean Henderson into his first serious save early in the second half.

United started the game with the joint best defensive record in the league, but a rare slip from Enda Stevens presented Son with a glorious chance and his deflected shot squeezed through Henderson's legs.

However, after a painstakingly long check, Lundstram's toe was ruled offside.

The Blades got the slice of fortune they deserved when Baldock's miscued his cross but it ended up bending in at the far post.

Spurs had a late flurry in an attempt to take the three points, but Henderson was on hand to tip over Lucas Moura's effort and the home fans roundly booed their team off at the final whistle.

Tottenham Hotspur Sheffield United English Premier League Football
Get the latest Cricket news, check out the India cricket schedule, Cricket live score . Like us on Facebook or follow us on Twitter for more sports updates. You can also download the NDTV Cricket app for Android or iOS.