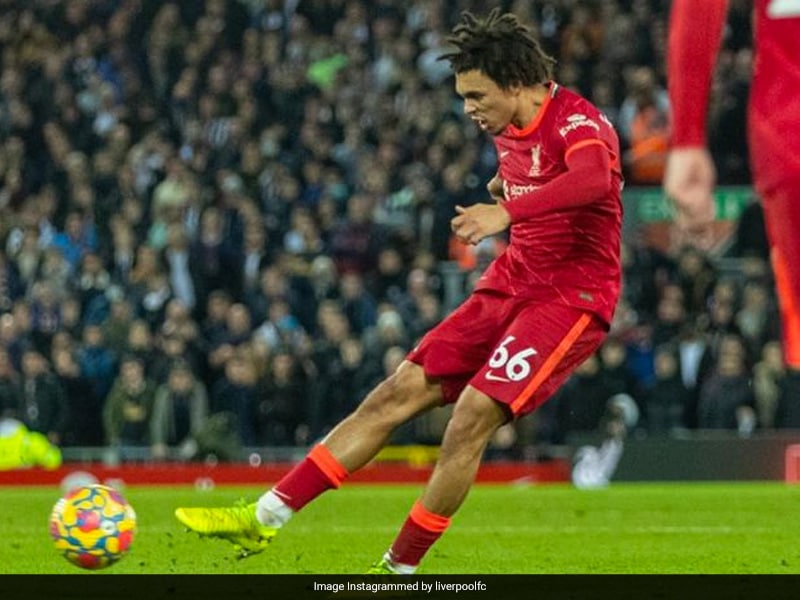 Liverpool's Trent Alexander-Arnold executed a breathtaking long-range shot in his team's 3-1 victory at Anfield against Newcastle United in a Premier League encounter. Trent, who comes in with quite a reputation for scoring spectacular goals, showed why he is rated so highly when it comes to taking the attack to the opposition. Three minutes before the end of normal time, Trent received an enticing ball right at the edge of Newcastle's box. The footballer took a couple of touches and executed a near perfect in-step shot which ended in the top right corner of the opposition goal.

Liverpool's Twitter handle also acknowledged the technical mastery of the defender and shared the goal with a caption which read: "Take a bow."

Just before the start of the match, Liverpool lost Virgil van Dijk and Fabinho to positive cases of Covid. However, this didn't dampen the spirit of the squad going into the tricky fixture vs Newcastle.

Newcastle did take a surprise lead in the 7th minute through Jonjo Shelvey but the home side roared back as they scored two goals in the first-half itself.

Diego Jota opened the scoring for Liverpool in the 21st minute while Mohamed Salah netted the second four minutes later.

Jurgen Klopp's Liverpool ended the match strongly with 75 per cent possession of the ball and five more shots on target as compared to their opponents.

The win helped Liverpool bridge the gap to Manchester City to just a single point as they strengthened their second place on the Premier League table.

Newcastle United Trent Alexander-Arnold Mohamed Salah English Premier League Football
Get the latest updates on ICC Women's Cricket World Cup 2022 and IPL 2022, check out the Schedule , Live Score and IPL Points Table. Like us on Facebook or follow us on Twitter for more sports updates. You can also download the NDTV Cricket app for Android or iOS.