Premier League: Patrick Vieira was involved in an altercation with a Everton fan as The Toffees prevented relegation by defeating Crystal Palace on Friday. 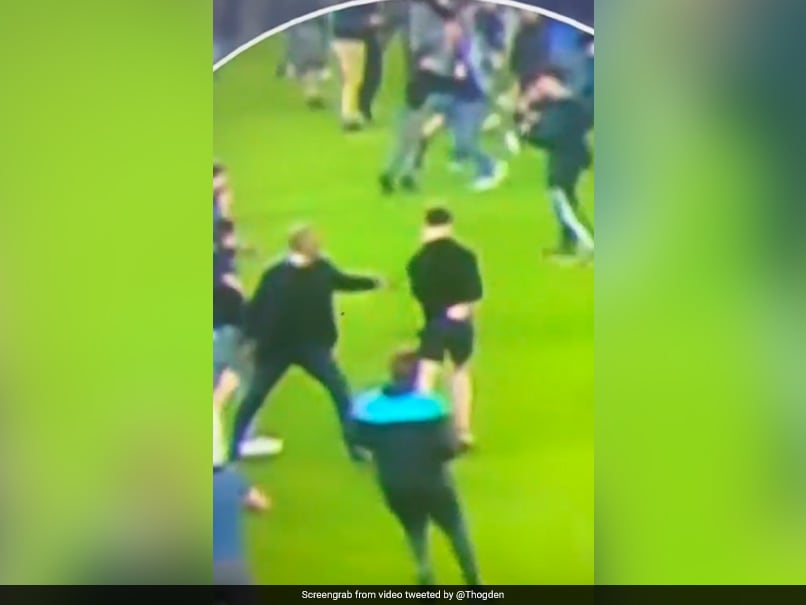 PL: Patrick Vieira was involved in an altercation with a Everton fan.© Twitter

Crystal Palace manager Patrick Vieira was involved in an altercation with a football fan after his team was defeated by Everton in a thrilling clash at Goodison Park on Friday, which helped The Toffees avoid relegation. Trailing 0-2, Everton staged a second-half comeback to seal a 3-2 win against Crystal Palace. There was a pitch invasion by fans after the final whistle. Television footage showed the ugly scenes at full-time as Vieira was taunted by an opposition supporter. The supporter looked to be goading the Frenchman and seemed to be holding up a phone while extending his arms very close to Vieira's face. Vieira then tried to grab the phone before kicking him with his right foot and the fan fell to the ground. The former Arsenal man was then surrounded by some fans as he tried to walk away.

Here is the full video of Vieira's confrontation with the Everton fan:

Patrick Viera and a Everton fan after the game pic.twitter.com/zaxRGfe0YE

After the match, Vieira was asked about the altercation by AP and he said, "I have nothing to say about that".

Meanwhile, Everton's Frank Lampard stated, "I feel for Patrick. I didn't get him at the end. I would have said, 'come in with us' - although he might not have wanted that."

"Of course, he ran 80 yards across the pitch and it's not easy."

"It was pure elation of fans who have come on the pitch after avoiding relegation."

"If it is done in the right way let them stay on the pitch, let them have their moment. As long as they behave, no problem", he further added.

Crystal Palace entered half-time with a 2-0 lead but the hosts had other plans as Michael Keane scored a goal in the 54th-minute. Richarlison gave them more hope in the 75th-minute to make it 2-2.

Dominic Calvert-Lewin completed the comeback in the 85th-minute to make it 3-2.

Everton English Premier League Football
Get the latest updates on Fifa Worldcup 2022 and check out  Fifa World Cup Schedule, Stats and Live Cricket Score. Like us on Facebook or follow us on Twitter for more sports updates. You can also download the NDTV Cricket app for Android or iOS.