Sam Vokes scored twice as Burnley torpedoed defending champions Chelsea 3-2 at Stamford Bridge on Saturday in one of the most sensational opening-weekend results in English top flight history. 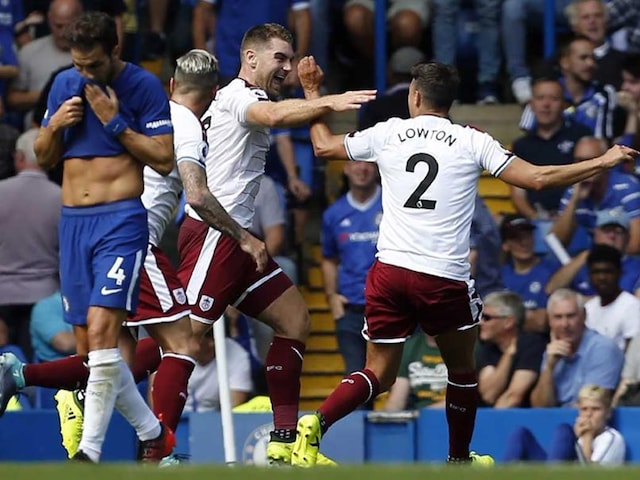 Sam Vokes scored twice as Burnley torpedoed defending champions Chelsea 3-2 at Stamford Bridge on Saturday in one of the most sensational opening-weekend results in English top flight history. Chelsea had captain Gary Cahill and Cesc Fabregas sent off and Burnley took full advantage through Vokes's brace and a superb Stephen Ward effort, with goals from Alvaro Morata and David Luiz coming in vain. Leicester City lost 2-1 at Hull City on the first day last season, but given the unexpected nature of their title win, this was the biggest opening-day shock since Aston Villa's 3-1 win over Manchester United in 1995.

Huddersfield Town marked their top flight return with a remarkable 3-0 win at Crystal Palace that sent them top of the table, while Wayne Rooney bagged the winner on his Everton comeback in a 1-0 victory over Stoke City.

Burnley's win, their first at Chelsea since 1971, further blackened the mood around Stamford Bridge after a close season during which manager Antonio Conte has grown frustrated by his side's lack of transfer activity.

Conte was without the injured Eden Hazard and out-of-favour striker Diego Costa and started with £58 million ($75.5 million, 63.8 million euros) signing Morata on the bench.

Youth-team graduate Jeremie Boga made his debut, but was hauled off in the reshuffle that followed Cahill's 14th-minute dismissal for a reckless, studs-up foul on Steven Defour.

Vokes put Burnley ahead in the 24th minute, volleying in from Matthew Lowton's cross.

Ward doubled the visitors' advantage in the 39th minute with a blistering left-foot strike from Jack Cork's lofted pass and Vokes added a third before half-time, heading in Defour's cross.

Half-time substitute Morata and Luiz reduced the arrears in the second half, either side of Fabregas's 81st-minute dismissal for a second yellow card, but Burnley hung on for a famous victory.

Liverpool were denied a winning start as Miguel Britos claimed a contentious stoppage-time leveller to earn Watford a 3-3 draw at Vicarage Road.

Watford twice went in front through Stefano Okaka and Abdoulaye Doucoure, but Liverpool equalised each time via Sadio Mane and Roberto Firmino, who then teed up new boy Mohamed Salah to put the Reds 3-2 up.

In the third minute of injury time, a shot from Richarlison was pushed against the bar by Liverpool goalkeeper Simon Mignolet and Britos, who appeared to be offside, nodded the ball over the line.

"The equaliser was offside. It's obvious because the linesman is on the line. He needs to see it," said Liverpool manager Jurgen Klopp.

"We would have had defensive areas we need to work on even if we'd won 3-2, but we were the better team. We should have won."

Frank de Boer made a losing start to life as Palace manager after a Joel Ward own goal and a Steve Mounie double earned Huddersfield a 3-0 win on their return to the top flight after an absence of 45 years.

Mounie's goals were the first repayments on his club-record £11.4 million transfer from Montpellier and sent David Wagner's men to the top of the fledgling standings.

Rooney crowned his first appearance for formative club Everton since 2004 by notching the only goal against Stoke, heading in Dominic Calvert-Lewin's cross for his 199th Premier League goal.

Comments
Topics mentioned in this article
Chelsea Liverpool Burnley Leicester City Arsenal Gary Cahill Cesc Fàbregas Eden Hazard English Premier League Football
Get the latest updates on IPL 2020, check out the IPL Schedule for 2020 and Indian Premier League (IPL) Cricket live score . Like us on Facebook or follow us on Twitter for more sports updates. You can also download the NDTV Cricket app for Android or iOS.