Arsenal had to play the last 28 minutes with 10 men after Brazilian defender Gabriel was dismissed for a second booking, but they held firm to avoid the ignominy of a fifth successive home league defeat. 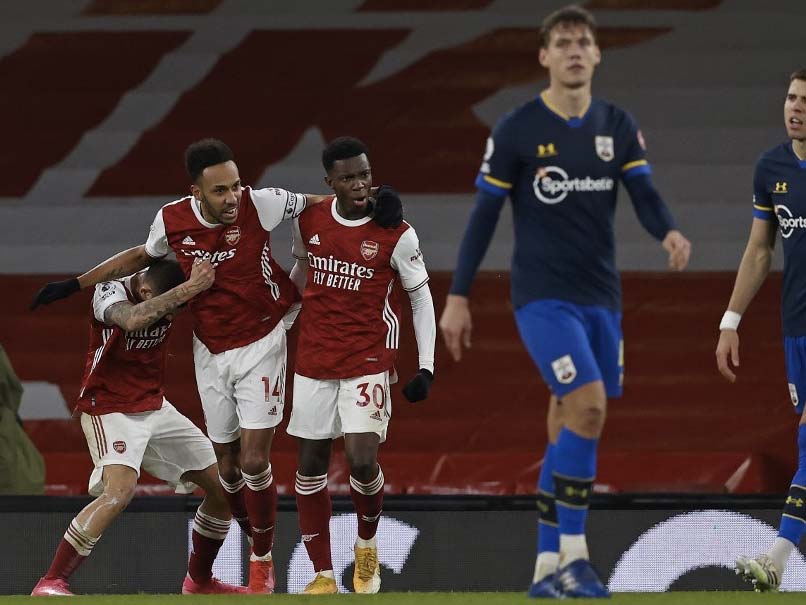 Pierre-Emerick Aubameyang ended a run of 11 games without a goal in open play.© AFP

Mikel Arteta admitted Arsenal "shot themselves in the foot" after Gabriel was sent off in their 1-1 draw against Southampton on Wednesday. With Arteta under intense pressure after his side's wretched recent run, the Arsenal manager was shifting uncomfortably on the touchline when Theo Walcott put Southampton ahead in the first half at the Emirates Stadium.

Walcott's goal against his troubled former club was a painful twist of the knife, but Pierre-Emerick Aubameyang ended a run of 11 games without a goal in open play with his second-half equaliser.

Arsenal had to play the last 28 minutes with 10 men after Brazilian defender Gabriel was dismissed for a second booking, but they held firm to avoid the ignominy of a fifth successive home league defeat.

"The boys came out like we did three days ago, we scored a really good goal, on top in the game, and again we shoot ourselves in the foot," Arteta said.

"Very disappointed because in that moment I was thinking to change the centre-back straight away. We didn't even have time to do that.

"In the end we got a point that considering the circumstances we have to accept."

While a point was something of a relief for Arteta in the circumstances, his 50th game in charge was hardly a cause for celebration.

Arsenal are languishing in 15th place after seven defeats in their first 13 league games and sit much closer to the relegation zone than the top four.

Arteta insisted this week that he is strong enough to cope with the pressure of Arsenal's worst start to a season since 1974.

But the Gunners' six-match winless league run leaves him engaged in a fight to save his job heading into the hectic Christmas period.

In the circumstances, a rare goal for Aubameyang was something for Arteta to hold onto as he looks for signs of a revival.

"He needed that confidence boost. He is very critical with himself, hopefully he can move and be more optimistic in the future," Arteta said.

Beaten at home by Burnley at the weekend, Arsenal still looked bereft of confidence.

Disorganised at the back and short of leadership in midfield, Arteta's team were carved open with ease when Walcott put Southampton ahead in the 18th minute.

Somehow, it was inevitable that Walcott, who scored 108 goals for Arsenal between 2006 and 2018, would be the man to add to their miseries.

Arsenal carelessly surrendered possession and Che Adams made them pay with a fine pass behind Kieran Tierney to pick out Walcott, who sprinted clear and clipped a cool finish over Bernd Leno.

Aubameyang was anonymous in the first half, maintaining a pattern since he signed his new contract in September.

But when Arteta needed him most, the Gabon forward came to his rescue with just his fifth goal of the season in the 52nd minute.

Bukayo Saka was the catalyst with a superb run past three Southampton players down the left wing.

Eddie Nketiah took Saka's pass and guided the ball deftly into Aubameyang's path and he stroked a cool finish into the far corner from the edge of the area.

Arteta's relief was clear to see as he celebrated by punching the air.

But there was more angst for Arteta in the 62nd minute as Gabriel was sent off.

Guilty of getting too close to Walcott, the winger's nimble turn triggered a panicked tackle from the centre-back, who hauled him down and could have no complaints about his early exit.

It was Arsenal's second red card in two games, and the seventh of Arteta's 12-month reign, following Granit Xhaka's foolish dismissal for grabbing Burnley's Ashley Westwood around the neck.

In a tense finale, Southampton's Nathan Redmond stretched to shoot against the bar before Arsenal defender Rob Holding hit the woodwork with a header in stoppage-time.

Southampton Pierre-Emerick Aubameyang English Premier League Football
Get the latest updates on Olympics 2020, Olympics 2020 Medal Tally, Live Cricket Score . Like us on Facebook or follow us on Twitter for more sports updates. You can also download the NDTV Cricket app for Android or iOS.