Beleaguered Arsenal manager Arsene Wenger called on his players to show they can meet the club's standards after a second humbling 3-0 defeat at the hands of Manchester City in five days on Thursday. 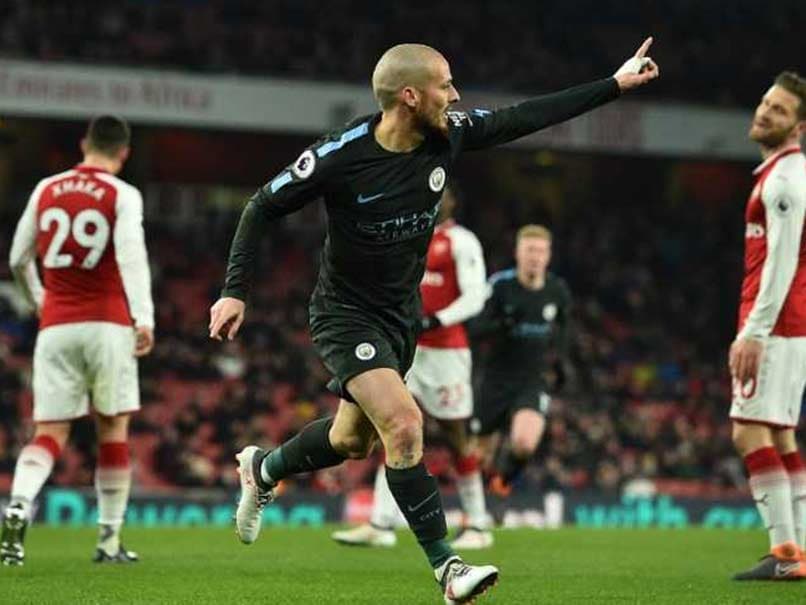 David Silva celebrates after scoring against Arsenal on Thursday.© AFP

Beleaguered Arsenal manager Arsene Wenger called on his players to show they can meet the club's standards after a second humbling 3-0 defeat at the hands of Manchester City in five days on Thursday. City moved 16 points clear at the top of the Premier League as fresh from claiming their first silverware of the Pep Guardiola era in the League Cup final on Sunday, the visitors scored three times in the opening 33 minutes as Arsenal disintegrated once more in front of a sparse crowd at the Emirates.

Bernardo Silva, David Silva and Leroy Sane were on target to inflict a third straight defeat on Arsenal and leave them 10 points adrift of the Premier League top four in sixth place.

And a night to forget for the Gunners was complete when £56 million ($79 million) club record signing Pierre-Emerick Aubameyang saw his second-half penalty saved by Ederson.

"You go up by stairs and come down by the lift, that is what happens with confidence," said Wenger. "We have to show we have the level to be at Arsenal football club."

However, the Frenchman again refused to accept it is inevitable that his 22-year stay as boss is coming to a sad end.

"I am confident that nothing is permanent in life," added Wenger. "It is down to how you respond and the focus and effort you show to turn things around."

Sub-zero temperatures and the apathy caused by Arsenal's display at Wembley on Sunday saw thousands of seats go unoccupied at the Emirates.

The lines around the pitch were painted blue ahead of kick-off in case an expected snow shower covered the field.

Unfortunately for the home fans that did brave the cold, that was the only novelty on a night of familiar failings from Wenger's men, who have now lost seven times in 12 games this year.

"Do you want the fans to be happy when you are 3-0 down? I am surprised you are surprised," continued Wenger.

"It was combination of the weather conditions and the fact we had a big disappointment on Sunday."

Arsenal had even started the brighter as Ederson prevented Vincent Kompany turning into his own net before Henrikh Mkhitaryan stung the palms of the Brazilian goalkeeper with a drive from the edge of the box.

However, they never recovered from the sucker punch of City's opener on 15 minutes as Sane weaved away from three Arsenal challenges on the left and teed up Bernardo Silva to cut inside onto his favoured left foot and curl into the top corner.

City showed their more clinical touch in the final third again just before the half hour mark.

Sane was involved once more before Sergio Aguero played in David Silva to slot home at Petr Cech's near post.

City then exhibited their speed on the counter-attack for a third five minutes later as Aguero, Kevin de Bruyne and Kyle Walker combined to set up Sane to tap home his 12th goal of the season.

Guardiola celebrated his 100th game in charge of City by hailing his side's focus to not let complacency seep in despite their huge lead at the top.

"People always think 'a lot of points in front, we can relax' and we did the opposite," said Guardiola.

"It is never easy if you are not focused against teams like Arsenal. We were (focused) and so far we make an amazing Premier League season."

Arsenal's anguish was rounded off seven minutes into the second period when Nicolas Otamendi chopped down Mkhitaryan inside the area.

Aubameyang took responsibility from the spot, but the lack of conviction in his penalty reflected Arsenal's performance as Ederson saved comfortably low to his left.

Comments
Topics mentioned in this article
Arsenal Manchester City David Silva English Premier League Football
Get the latest updates on IPL 2020, check out the IPL Schedule for 2020 and Indian Premier League (IPL) Cricket live score . Like us on Facebook or follow us on Twitter for more sports updates. You can also download the NDTV Cricket app for Android or iOS.