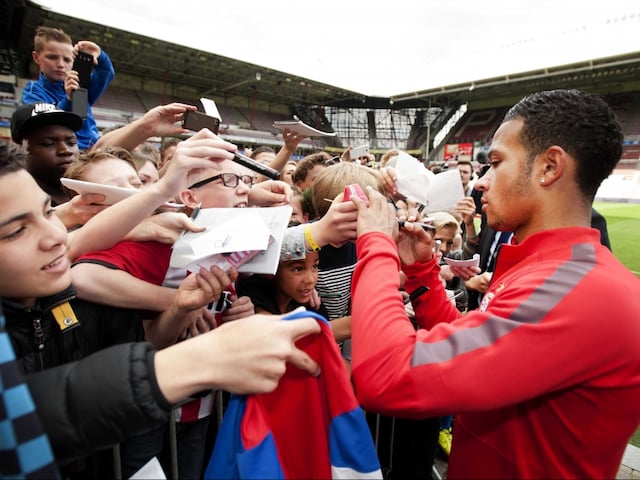 Manchester United's new signing Memphis Depay declared on Wednesday that his ambition is to become the best player in the world during his time at Old Trafford. (Man United Announce Deal for Memphis Depay)

Depay, who has scored 25 goals this season, has the words 'Dream Chaser' tattooed on his chest and said that it was his dream to emulate superstars like Lionel Messi and Cristiano Ronaldo.

"'Dream Chaser' stands for me chasing my dreams," Depay told reporters during a sponsor's event in London. (Van Gaal Convinced me to Join Manchester United: Depay)

"I believe I can be one of the best players in the world and I have to dream and believe to achieve. It is tattooed on my chest. You just have to work every day on your dreams.

"My dreams started with going to the World Cup and then when I was there, I scored two goals -- becoming the youngest ever Dutch goal-scorer (at a World Cup) -- and I was very happy.

"But when the World Cup was finished, I realised that was not it. I had to take more onto the pitch. There was more to do.

"So after the World Cup in pre-season I spoke to my manager and said I have to keep focused. Scoring in the World Cup was good, but not the end of it. Now I am on fire."

Depay's international team-mate Leroy Fer has compared him to Ronaldo, who became a crowd favourite during his six-year spell at Old Trafford, but the United new boy knows he is not on a par with the Portuguese yet.

"I heard Leroy Fer speak about it and it is great to hear that from other players," Depay said. "If you read it in the media, it is great, but I am 21 and I have not reached the level of Cristiano Ronaldo.

"He is a big hero for me and one day I hope to reach that level. He scores so many goals and I want to fight to be one of the best players in the world."

The move to Manchester, which is subject to a medical examination, will reunite Depay with United manager Louis van Gaal, who awarded him his first international cap in October 2013.

"He is different," Depay said of the former Holland coach. "His performance on the training ground is different from other trainers.

"It will be great to have an opportunity to train with him and work with him. Of course I am looking forward."

Comments
Topics mentioned in this article
Manchester United PSV Eindhoven Memphis Depay English Premier League Football
Get the latest Cricket news, check out the India cricket schedule, Cricket live score . Like us on Facebook or follow us on Twitter for more sports updates. You can also download the NDTV Cricket app for Android or iOS.