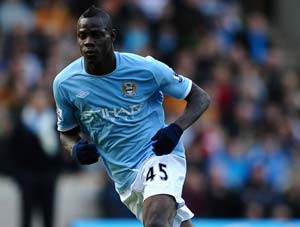 Victory in this early kick-off match saw United supplant Chelsea in first place and that is where they stayed after the European champions were held to a 1-1 draw at Swansea later Saturday.

Premier League title holders Manchester City could have drawn level at the summit with United but instead were left two points adrift of their local rivals following a goalless draw away to West Ham in the day's late kick-off.

In Manchester, van Persie needed fewer than three minutes to put United in front before Patrice Evra doubled their lead in the 67th minute.

Arsenal's day got worse when midfielder Jack Wilshere, in only his second game back following a long injury lay-off, was sent off for a second bookable offence after he caught Evra on the ankle.

"It was a special day, in the end it was about the game and I think we played well," van Persie told Sky Sports.

United manager Alex Ferguson praised van Persie's all-round display by saying: "I thought he was fantastic today. His movement, his penetration was fantastic."

Van Persie, playing against Arsenal for the first time since his £24 million ($39 million) pre-season move from the Gunners, wasted little time in giving United the lead.

He scored in the third minute when, after Thomas Vermaelen failed to clear a Rafael cross, Van Persie struck from the edge of the penalty area.

It was the 29-year-old van Persie's 10th goal in 13 United appearances.

United were awarded a penalty shortly before half-time after Santi Cazorla blocked Ashley Young's cross with his arm only for Wayne Rooney to drill his spot-kick wide of the left post.

However, Evra did make it 2-0 when he headed in a Rooney cross following a short corner.

Cazorla pulled a goal back for Arsenal with virtually the last kick of the match, but by then the damage had been done and Gunners manager Arsene Wenger said afterwards: "It was important not to put ourselves in trouble, which is what we did."

Nigeria winger Victor Moses gave Chelsea a 61st minute lead at the Liberty Stadium with a flick-on after Gary Cahill's header from an Eden Hazard corner only for Pablo Hernandez to equalise two minutes from time.

"It is a disappointment we weren't able to finish the game off," said Chelsea manager Roberto di Matteo.

At Upton Park, Manchester City were fortunate to maintain an unbeaten start to their title defence.

They nearly fell behind early on when West Ham midfielder Kevin Nolan lashed a volley into the net only for his effort to be unluckily ruled out for offside.

And the Londoners suffered more bad luck when another volley, this time from Israel's Yossi Benayoun, hit the post before England striker Andy Carroll added to their frustrations by shooting wide.

Still in the first half, City's Mario Balotelli then wastefully volleyed over from eight yards out.

"We continue to miss a lot of chances in every game and this is no good," City manager Roberto Mancini, who started with three strikers in Balotelli, Carlos Tevez and Edin Dzeko, told ESPN.

However, he added: "When the champions are unbeaten, and you play them at home and get a draw, you've got to be happy."

Spurs dropped out of the Champions League positions after Wigan's Ben Watson scored the only goal in a 1-0 win for the visitors at White Hart Lane.

Elsewhere, Gabriel Agbonlahor scored for the first time in 29 league games as Aston Villa pulled clear of the relegation zone with a 1-0 win against a Sunderland side managed by former boss Martin O'Neill.

Meanwhile, Bradley Johnson headed in the only goal of the game a minute before half-time as strugglers Norwich beat Stoke 1-0 at Carrow Road.

Comments
Topics mentioned in this article
Arsenal Swansea City Football Manchester City Alex Ferguson Mark Hughes English Premier League
Get the latest updates on IPL 2020, check out the IPL Schedule for 2020 and Indian Premier League (IPL) Cricket live score . Like us on Facebook or follow us on Twitter for more sports updates. You can also download the NDTV Cricket app for Android or iOS.