Moyes's successor at Goodison Park, Roberto Martinez, questioned the timing of the offer, but Moyes says he remains on good terms with the club and their chairman, Bill Kenwright. 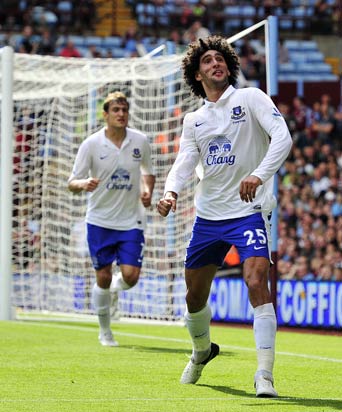 Manchester United manager David Moyes says former club Everton will harm the careers of Leighton Baines and Marouane Fellaini if they prevent the pair from following him to Old Trafford.

Moyes, who left Everton at the end of last season, had a £28 million ($44 million, 33 million euros) joint-bid for the duo rejected earlier this week, which the Merseyside club branded "derisory and insulting".

Moyes's successor at Goodison Park, Roberto Martinez, questioned the timing of the offer, but Moyes says he remains on good terms with the club and their chairman, Bill Kenwright.

"There's a mixed market at the moment. Nobody's quite sure where the price is just now," Moyes said.

"We've had offers for players which we think are quite small. I can see where other clubs might be thinking there's not enough value for their players as well.

"I definitely (have sympathy for Martinez). But I also know if I had been Everton manager and Sir Alex (Ferguson) had come asking for Baines and Fellaini, I'd have found it very difficult to keep them.

"Roberto is new in his job and I'm sure he'll get to understand how Everton work. I respect Everton greatly and speak with Bill Kenwright most weeks.

"Of course taking their players is going to affect them, but there is not any disrespect whatsoever because we didn't make the offer public."

Moyes will take charge of his first competitive home game as United manager on Monday when Jose Mourinho's Chelsea visit Old Trafford in the Premier League.

United striker Wayne Rooney has reportedly become unsettled after Chelsea had two bids for him rejected, but Moyes says he could hand the 27-year-old a start after he came on and created two goals in last weekend's 4-1 win at Swansea City.

"Wayne has recovered and has a good chance of starting," Moyes said.