EPL: Wayne Rooney's brace gets Manchester United out of trouble against Tottenham Hotspur

Spurs led twice, through a Kyle Walker free-kick and then a stunning strike from Sandro, but Rooney hit back on each occasion to extend United's unbeaten record to 12 games in all competitions. 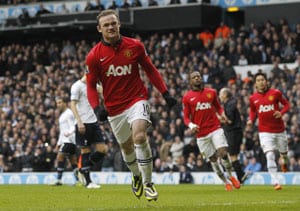 Wayne Rooney scored a brace as Manchester United twice came from behind to draw 2-2 at Tottenham Hotspur in an entertaining Premier League encounter on Sunday.

Spurs led twice, through a Kyle Walker free-kick and then a stunning strike from Sandro, but Rooney hit back on each occasion to extend United's unbeaten record to 12 games in all competitions.

David Moyes's side were thankful to leave White Hart Lane with a point, but having also drawn 2-2 at Cardiff City last weekend, this was another missed opportunity to gain ground on the top four.

Following the euphoria of the 5-0 mid-week thrashing of Bayer Leverkusen in the Champions League, it was a reality check for the champions, who remain in eighth place, nine points behind leaders Arsenal.

"We had a great win in mid-week and, but for a minute at Cardiff near the end, you'd have been saying Manchester United have had a really good week," said United manager Moyes.

"But United have to win. That's why at the end we were still trying to get a way of getting the third goal, but we couldn't quite get it."

It is now 13 games since Spurs last beat United at home, but they were unrecognisable from the team thrashed 6-0 at Manchester City last weekend and continue to trail United by only a point.

"Obviously it was not a bad result, because against Manchester United it is always difficult, but I think, due to fact that we took a heavy defeat against Manchester City, this was a great response from the players," said Spurs manager Andre Villas-Boas.

United welcomed back captain Nemanja Vidic following concussion, but Robin van Persie was once again unavailable due to a groin injury.

Spurs made six changes to the team that won 2-0 at Tromso in the Europa League on Thursday, with Villas-Boas electing to deploy Sandro, Paulinho and Mousa Dembele in a three-man midfield.

Eager to atone for last weekend's drubbing, Spurs began in purposeful fashion, with Aaron Lennon seeing a low shot saved by David de Gea, and in the 18th minute they went ahead.

An ill-advised challenge on Paulinho by Jonny Evans presented Spurs with a free-kick just outside the box, slightly to the left of centre, and Walker drilled a low shot beneath the jumping defensive wall and past De Gea.

Momentarily, United looked in danger of being swept away and they survived several scares as the home side looked to press home their early advantage.

Rooney blocked on the line from Michael Dawson, while Roberto Soldado should have done better than screw high and wide after a slick one-two with Paulinho.

The Spanish striker then freed Lennon with an incisive pass down the inside-left channel, but De Gea thwarted the former Leeds United winger at his near post.

United had not carried an attacking threat, but in the 32nd minute they drew level and Walker was at fault.

United's forwards seemed closely marshalled as Phil Jones sent a cross into the Spurs box from the United right, but in dangling out his right leg the England right-back inadvertently diverted the ball straight into the path of Rooney, who rattled home from close range.

Spurs restored their lead nine minutes into the second half with a goal from Sandro that will linger long in the memory.

Picking up the ball near halfway, the Brazilian sent Tom Cleverley one way and then the other, before arrowing a sumptuous shot past a motionless De Gea from just outside the area.

However, just as in the first half, Spurs were unable to protect their lead.

Barely two minutes had elapsed when Spurs goalkeeper Hugo Lloris brought down Danny Welbeck and after referee Mike Dean pointed to the spot, Rooney drilled his penalty down the middle to tie the scores and take his tally of league goals to eight.

Spurs substitute Andros Townsend came closest to settling the game, narrowly failing to make contact with a low centre from Walker, but although a draw was fair on both sides, a point suited neither.