Ederson To Miss Manchester City's Match Against Liverpool With Injury

Manchester City will be without first choice goalkeeper Ederson for their top-of-the-table clash with Liverpool on Sunday. 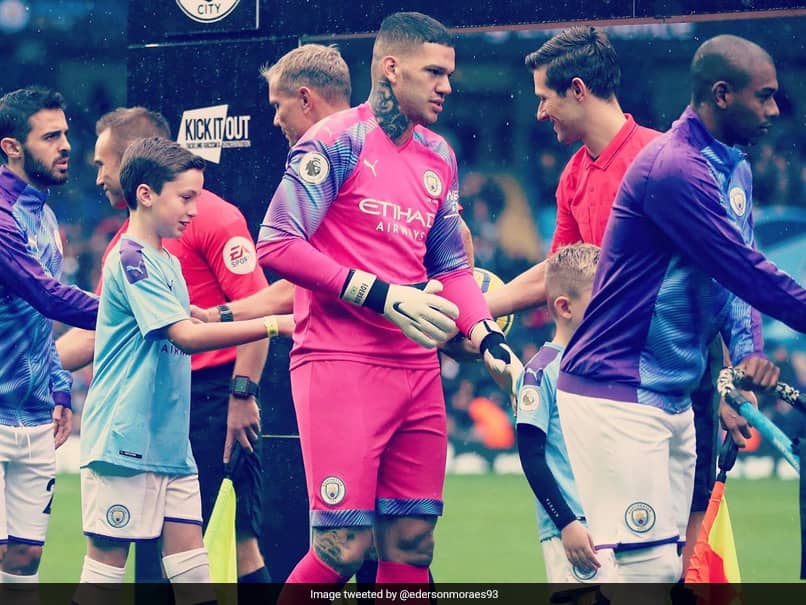 Manchester City suffered a huge blow ahead of Sunday's top-of-the-table clash at Premier League leaders Liverpool with goalkeeper Ederson ruled out through injury. The Brazilian international came off at half-time during Wednesday's 1-1 Champions League draw at Atalanta with a muscular problem. "He's not able to play," said City manager Pep Guardiola at his pre-match press conference. City ended that game in Milan with right-back Kyle Walker in goal after Ederson's replacement Claudio Bravo was sent off 10 minutes from time for bringing down Josip Ilicic outside his box.

Bravo endured an error-strewn first season in England back in 2016/17 when City finished third in the Premier League.

The Chilean has been replaced by Ederson as Guardiola's first-choice stopper over the past two seasons as City have won the league.

However, Guardiola rejected suggestions that Bravo will be a liability at Anfield on Sunday.

"We have another top 'keeper," added Guardiola.

"You have to respect this guy. He is 34-years-old and has spent his whole career at the top level.

"The first season he was struggling because he was new to the Premier League but the team was not at the top level.

"All the problems were not down to Claudio but it is easy to point the finger."

Defeat by Jurgen Klopp's team would leave City with a mountain to climb if they are to stop the Reds finally ending a 30-year wait to be champions of England again.

Liverpool have lost only one of their last 50 Premier League games but while Guardiola is aware of the task that will await his side should they lose, he does not believe it will be definitive in the title race.

"It never ends in November," he added. "I know what happens if we lose and everyone is going to say it is over, but we still have a lot of games to play.

"Experience in sport shows that you have to keep fighting until the end. That is what I want on Sunday and for the other games.

"It will be more difficult when you see a team like Liverpool who lost once last season and is unbeaten this season.

"So you can imagine that they are not going to lose many games but the season is long, and a lot of situations can happen."