Skipper John Terry, who will leave Chelsea at the end of the season, crowned his 716th game for the club with the opening goal, but was then at fault as Etienne Capoue equalised. 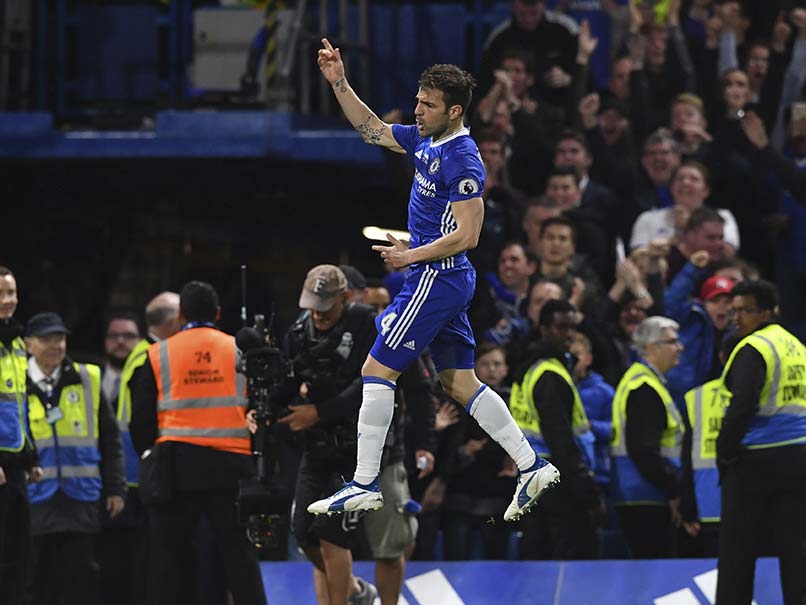 Skipper John Terry, who will leave Chelsea at the end of the season, crowned his 716th game for the club with the opening goal, but was then at fault as Etienne Capoue equalised.

After Cesar Azpilicueta and Michy Batshuayi put Chelsea 3-1 up, Daryl Janmaat and Stefano Okaka hit back, but Fabregas kept Antonio Conte's men on course to become the first team to win 30 games in a 38-game English top-flight season.

"I like to see this type of game because it's funny to see both teams score four and three goals -– in this stage of the season, when you've won the league!" said Chelsea manager Conte.

"We have the possibility to win 30 games and we have to try to reach this target now."

Conte made nine changes to his starting XI and having kept faith with the same tight group of first-teamers for the vast bulk of the season, it was little surprise their understudies looked a little undercooked.

It was the first time Chelsea had conceded three goals at home since a 3-0 loss to Manchester City in April 2016, but Fabregas's strike took them to 90 points for only the third time in the club's history.

With an FA Cup final against Arsenal on May 27 to tune up for, their fans will expect to see a more familiar starting line-up in Sunday's final game at home to relegated Sunderland, after which they will receive the league trophy.

"There were some positives, some not so positives, but overall it was a good game and I'm proud of my team," said Mazzarri, whose team remain 16th.

Batshuayi was rewarded for his title-clinching goal at West Bromwich Albion on Friday with a first league start in Chelsea blue and it was after he had seen a shot deflected wide that the hosts took a 22nd-minute lead.

From Willian's right-wing corner, Kurt Zouma headed the ball against Terry, who reacted sharply to hook the ball in off the left-hand post for his first goal since January last year.

Unfortunately for the Chelsea captain, he would play a role in another goal less than two minutes later, inadvertently helping Watford to end a sequence of six away games without scoring.

When Nathan Ake failed to get enough purchase on a headed clearance, Terry attempted to nod the ball back to Asmir Begovic, only for Capoue to steal in and send a header past the advancing Chelsea goalkeeper.

Parity did not last long, however, as Eden Hazard's 36th-minute corner was headed clear only as far as Azpilicueta, who took a touch before drilling a crisp shot into the bottom-left corner.

After Willian, freed by Hazard, had seen a shot finger-tipped wide by Watford goalkeeper Heurelho Gomes early in the second half, the 'one for you, one for me' pattern of scoring was repeated.

In the 49th minute, Kenedy's deflected shot ballooned into the air and was superbly controlled by Ake, who squared to Batshuayi for a tap-in.

Two minutes later, Janmaat looked to instigate a one-two with M'Baye Niang on the Watford left and when the ball came back to him off Zouma, he burrowed into the box, stepped inside Ake and finished with aplomb.

Okaka equalised in the 74th minute with practically his first touch after coming on, slamming home after Zouma failed to cope with Tom Cleverley's cross from the right.

But Fabregas's entrance dynamised Chelsea and after he had twice been denied by Gomes, he settled the game, sweeping Willian's cut-back into the bottom-left corner from the edge of the box.

Comments
Topics mentioned in this article
Chelsea Cesc Fàbregas Football English Premier League
Get the latest updates on IPL 2021, check out the IPL 2021 Schedule and Indian Premier League Live Score . Like us on Facebook or follow us on Twitter for more sports updates. You can also download the NDTV Cricket app for Android or iOS.