Arsene Wenger Reveals He Has Decided On Arsenal Future 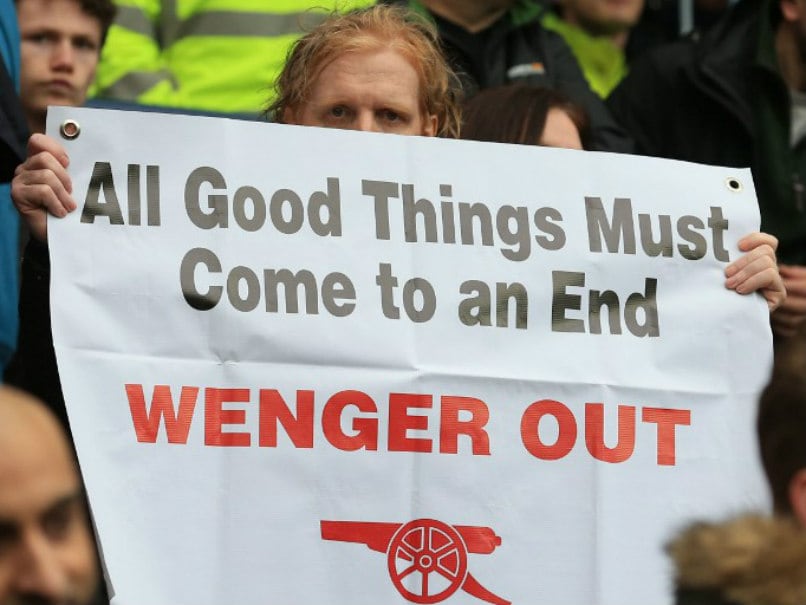 Arsenal fans hold up anti-Arsene Wenger signs after the match between West Brom and Arsenal.© AFP

Arsenal manager Arsene Wenger said he had made a decision about his future following his side's dispiriting 1-3 defeat at West Bromwich Albion on Saturday. Wenger, Arsenal's manager since 1996, has come under heavy pressure since his team's 2-10 (aggregate) Champions League thrashing by Bayern Munich and fans made renewed calls for him to step down at The Hawthorns. Rival groups of Arsenal supporters paid for planes trailing banners that were both critical and supportive of Wenger to fly over the stadium during the game.

"I know what I'll do in my future and you'll know very soon," he told reporters after the game.

A banner that read "NO CONTRACT #WENGER OUT" was seen flying above the stadium shortly before kick-off.

But in the 16th minute, with the score 1-1, another plane was spotted overhead with a banner that read: "IN ARSENE WE TRUST #RESPECTAW".

Several fans brandished "WENGER OUT" banners at the final whistle.

The 67-year-old Frenchman is believed to have been offered a new two-year contract by the club.

Arsenal's support is split over Wenger, who won seven trophies in his first nine seasons as manager but has won only two FA Cups in the 12 years since.

"It's very worrying because we are not used to that. We have a hell of a task now to fight back," Wenger told Sky Sports.

"We need to improve and focus on the games coming up. There are many big games. We have to go away and recover and prepare well for the end of the season."

Cech hobbled off shortly before half-time, with David Ospina taking his place, while Sanchez gave way for Alex Iwobi late on.

"We lost Petr Cech in the first half on a calf problem and after we lost Sanchez," Wenger said.

"He stayed on, but in the second half he was not himself so I decided to take him off. His ankle doesn't look good. When it doesn't go well, it's always the same."

"They were nowhere near the desire and the commitment needed to win a game in the Premier League," he said.

Arsenal midfielder Alex Oxlade-Chamberlain apologised to the club's fans after the game, describing their performance as "not acceptable".

Comments
Topics mentioned in this article
Arsenal West Bromwich Albion Craig Dawson Alexis Sánchez Arsene Wenger English Premier League Football
Get the latest updates on ICC T20 Worldcup 2022 and CWG 2022 check out the Schedule, Live Score and Medals Tally. Like us on Facebook or follow us on Twitter for more sports updates. You can also download the NDTV Cricket app for Android or iOS.