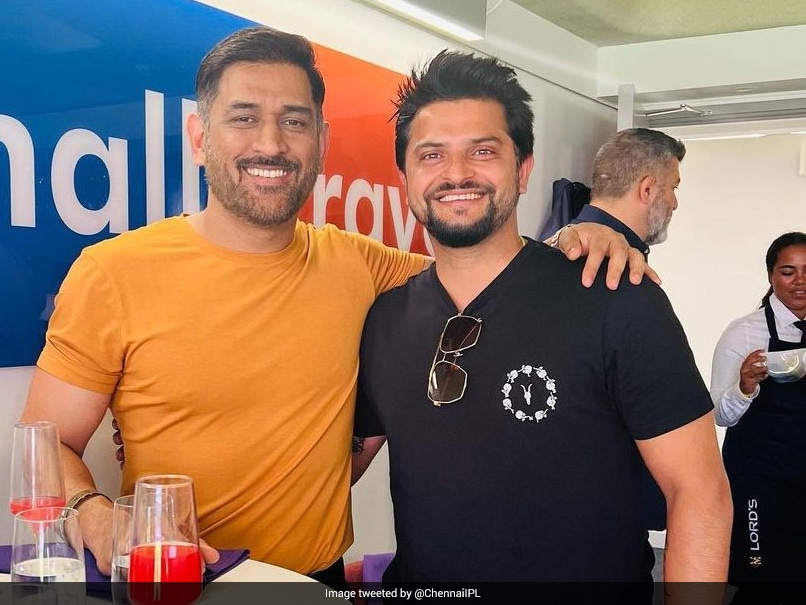 MS Dhoni with Suresh Raina at the Lord's© Twitter

The second ODI between India and England at Lord's on Thursday will be a great opportunity for the Rohit Sharma-led visitors to seal the series. India had won the first ODI of the three-match contest by 10 wickets. To watch the match, several former Indian cricket team stars including MS Dhoni, Sourav Ganguly, Sachin Tendulkar, Harbhajan Singh, Suresh Raina were present at the Lord's. "7+ 3 = a complete 10" tweeted Chennai Super Kings with an image of Dhoni and Raina together.

Other former stars like Ganguly and Sachin were also seen watching the match together.

Two of the best pair of Indian cricket at Lord's today. pic.twitter.com/SgyYer4IqJ

Earlier,  India skipper Rohit Sharma won the toss and opted to field against England in the second ODI of the three-match series at the Lord's stadium on Thursday. India star batter Virat Kohli has been included in the Playing XI after he had missed out on the first ODI due to a groin injury.

Speaking at the toss, Rohit said, "We're going to bowl first. Less grass for sure but looks like there is some moisture in the pitch. Looking at the size of the ground, we thought it's better to have a score on the board. Virat Kohli comes back in for Shreyas Iyer. He's (Bumrah) a proper bowler, no matter which the format is. Gives us a different dimension and can bowl in any phase of the game."

"Always nice to have a bowler like him in the squad. I thought it was quite challenging (to keep wickets), as in England, ball tends to move even after passing the stumps. He (Pant) did take some really good catches. They were very important for us. It (Lord's) is one of the best stadiums in the world, so the guys are keen to play well here. Sun is out, so perfect conditions," he added.

On the other hand, England skipper Jos Buttler said, "We would have bowled first as well. A 50-50 decision to be honest. Seems like a bit of moisture and might be tricky early on, if we can survive that, we should be fine. We're going with the same team. I think we've got to move on and just think it (the loss) as one of those off-days. We always think that batting is our main strength and one game isn't going to change it. Special time it was (World Cup win), anytime you're playing at Lord's, it's a great feeling."

Harbhajan Singh Cricket
Get the latest updates on India vs South Africa and check out  Schedule, Results and Live Score. Like us on Facebook or follow us on Twitter for more sports updates. You can also download the NDTV Cricket app for Android or iOS.