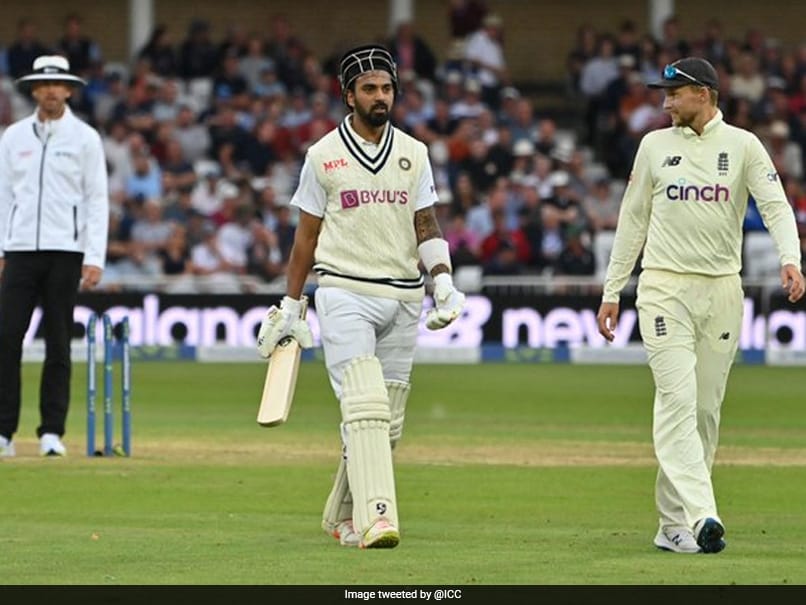 IND vs ENG: KL Rahul was unbeaten on 57 at Stumps on Day 2.© Twitter

On a day shortened majorly due to rain, two players clearly stood out. KL Rahul, playing due to injuries to Shubman Gill and Mayank Agarwal, marked his Test comeback with a fine half-century and finished the day unbeaten on 57, having added 48 runs to his overnight score of 9. James Anderson was the other big star of the day, bowling a brilliant spell in the second session that saw him dismiss two of the biggest stalwarts of India's middle-order -- Cheteshwar Pujara and Virat Kohli -- in successive deliveries. With Kohli's wicket, Anderson drew level with Anil Kumble as the third-highest wicket-taker in Tests. Both iconic bowlers have 619 wickets, but he is likely to surpass the former India legspinner. Earlier, Ollie Robinson had given England the first breakthrough when he dismissed Rohit Sharma on the stroke of Lunch. After Anderson's double-whammy, Ajinkya Rahane was also soon to fall as he was run-out after a mix-up, as India collapsed from 97 for no loss to 112/4. Rishabh Pant joined Rahul at the crease and the two moved the scoreboard on to 125/4 before bad light stopped play. It then began to rain, and only three more deliveries were bowled before it was decied to abandon play. On Friday, KL Rahul and Pant will look to reduce the trail of 58 runs and put India in a good position. (SCORECARD)

Stuart Broad England vs India, 2021 England vs India, 1st Test Live Score Live Cricket Score Live Blogs Cricket Rohit Sharma
Get the latest updates on India vs South Africa and check out  Schedule, Results and Live Score. Like us on Facebook or follow us on Twitter for more sports updates. You can also download the NDTV Cricket app for Android or iOS.