Highlights, India vs England 2nd T20I: Alex Hales' unbeaten 58 off 41 balls guided England to victory in the second T20I against India in Cardiff. 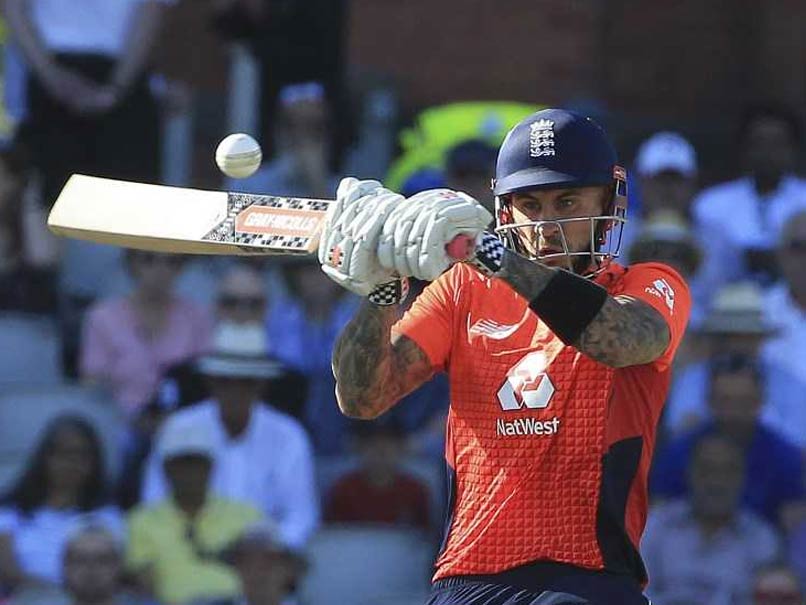 England beat India in the second T20I by 5 wickets to level series 1-1.© Twitter

Alex Hales kept his nerve with 58 not out to see England home and square the international T20 series against India 1-1 with one to play in Cardiff on Friday. Set 149 to win off their 20 overs England needed 12 off the final over and Hales put Bhuvneshwar Kumar out of the Cardiff ground off the first ball and the second for four. A single followed and David Willey hit Kumar for the winning runs to set up the decider on Monday. Hales made his runs from 41 balls with four fours and three sixes to get his side over the line when they were faltering. England's big hitters at the top of the order Jos Buttler and Jason Roy were both out cheaply trying to get the early run rate up to Umesh Kumar.

Earlier, Virat Kohli's 47 off 38 balls along with a quick-fire 32 from MS Dhoni guided India to a par score of 148/5 in 20 overs. India lost Rohit Sharma (5), Shikhar Dhawan (10) and in form KL Rahul (6) in quick succession. India at one stage were reeling at 22-3 but Kohli along with Suresh Raina steadied the Indian ship. Dhoni and Pandya added 22 crucial runs in the final over off the Indian innings. For England David Willey was the most successful bowler picking 1 wicket for 18 runs. Debutant Jake Ball also picked up one wicket giving away 44 runs. (Highlights: India vs England)

Highlights between India vs England 2nd T20, straight from Cardiff

01:40 IST: Thank you for joining us on our live coverage of the second T20I match between India and England.

England beat India in the second T20I by 5 wickets to level series 1-1.

01:36 IST: FOUR and it's GAME OVER! Willey finishes of in style for England.

01:33 IST:SIX! First ball from Bhuvneshwar Kumar and Alex Hales launches it for a monstrous six. What a way to reach his fifty. What a knock from Alex Hales under pressure. England require another 6 runs from 5 balls with 5 wickets remaining.

01:20 IST: OUT!Bowling change does the trick for India. Bhuvneshwar Kumar strikes.Bairstow walks back after scoring 20 runs. ENG 126-5 after 17.1 overs.

01:15 IST: Hardik Pandya gives away 7 runs in his final over . England marching strongly with Alex Hales (37) leading the chase. ENG 110-4 after 16 overs. Require another 39 runs from 24 balls with 6 wickets remaining.

01:01 IST: OUT!That was an awesome catch from Shikhar Dhawan at deep fine-leg. Morgan is stunned. He walks back after scoring 17 runs.Pandya gets his first wicket of the match. ENG 92-4 after 13.1 overs.

00:55 IST:SIX!Monstrous strike from Alex Hales over long-on to complete 12th over. Kuldeep watches as the ball sails out of the stadium. ENG 85-3 after 12 overs

00:53 IST: FOUR!Morgan joins the party.Brilliant shot off Kuldeep Yadav to collect a boundary. ENG 78-3 after 11.2 overs

00:46 IST: Review from India! Unsuccessful.Kuldeep Yadav ball strikes Morgan on the pads out replay suggest that the ball struck the pads outside stumps line. ENG 58-3 after 9.5 overs.

00:28 IST: POWERPLAY done!India have managed to restrict the run scoring from England in the powerplay overs. Both England openers are back and Joe Root and Hales are at the center. ENG 42-2 after 6 overs.

Umesh Yadav is at it from the word go. He's picked up two crucial wickets of Roy and Buttler in the three overs he's bowled so far.

00:23 IST: OUT! This time Virat Kohli takes it!Another simple catch of Jos Buttler and Virat makes no mistake this time. Umesh Yadav finally has a smile on his face. Buttler departs after scoring 14 runs. ENG 33-2 after 5 overs.

00:21 IST: Unbelievable! Virat Kohli drops a sitter at long-off. Every one is stunned including batsman Jos Buttler. The next ball he whacks it for FOUR! ENG 33-1 after 4.4 overs.

00:13 IST: FOUR! to finish of the 3rd over from Umesh Yadav. Brilliant straight drive from magician Jos Buttler. He is timing the ball beautifully at the moment. ENG 25-1 after 3 overs.

00:11 IST: FOUR! Short ball from Umesh Yadav and Buttler clubs it away through deep mid-wicket for four runs. ENG 21-1 after 2.4 overs.

23:59 IST:Jason Roy and Jos Buttler are at the center for England. Umesh Yadav will open the bowling for India.

22 runs in the last over propels #TeamIndia to a total of 148/5 in 20 overs at Sophia Gardens, Cardiff https://t.co/xKUX0VdLRK#ENGvIND pic.twitter.com/c93FJwC9Qr

23:39 IST: FOUR! Dhoni finishes off in style with boundary of a pull. 22 runs from the final over of Jake Ball. Virat Kohli(47) was the highest scorer for India. Dhoni scores 32 off 24 balls.

23:32 IST: SIX!Length ball from Chris Jordan and it disappears over long-on boundary for a six. First maximum for Hardik Pandya in the game. IND 125-5 after 18.5 overs.

23:23 IST: OUT! Virat Kohliwalks back after scoring 47off 38balls. Pulls the ball off David Willey and an outstanding catch from Joe Root at fine leg. IND 111-5 after 17.2 overs.

23:12 IST: FOUR! After 4 dot balls, Dhoni whacks the fifth one off Rashid with enormous power towards deep mid-wicket boundary for a four. IND 93-4 after 14.5 overs.

22:52 IST: FOUR! SIX! Virat Kohli goes after Adil Rashid. First boundary was a brilliant flick of the wrist towards deep mid-wicket. Second shot was straight down the ground. Ball just crosses the rope. IND 67-3 after 11 overs.

22:37 IST: FOUR! Boundary to finish of the 7th over from Liam Plunkett. Raina awkwardly pulls the ball over long-on boundary for a four. IND 36-3 after 7 overs.

22:33 IST:POWERPLAY overs are up! Perfect start for England as Indian batsmen Suresh Raina and Virat Kohli are living dangerously at the moment. England pacers are causing a lot of trouble with short pitched deliveries. IND 31-3 after 6 overs.

22:23 IST: OUT! That was unfortunate!Bizarre dismissal as Dhawan fails to make his ground after getting hit on his arm. IND 22-2 after 4.2 overs.

22:20 IST: FOUR! Misfield from Alex Hales at deep square leg and Dhawan collects a boundary off Jake Ball. IND 21-1 after 3.5 over.

22:09 IST: OUT! Rohit Sharma is out after scoring 5 runs.Mistimes a pull shot and the ball is comfortably caught by wicket-keeper Jos Buttler. First T20I wicket for debutant Jake Ball. IND 7-1 after 2 overs.

IT20 debut
Wicket in your first over

22:08 IST: FOUR!First boundary for India and Rohit Sharma. That was SMASHED right from the middle of the bat. IND 7-1 after 1.4 overs.

22:04 IST:Rohit Sharma and India are off the mark with a single. Rohit tries a risky ramp shot off Willey but misses. Ball hits on the thigh and Rohit takes a single.IND 1-0 after 0.5 overs.

22:01 IST: First Ball! Right on the money from David Willey.

21:59 IST: Shikhar Dhawan and Rohit Sharma are out at the center for India. David Willey will start the proceedings for England.

21:31 IST:England skipper Eoin Morgan has won the toss and opted to bowl against India.

20:55 IST: Here's the pitch for you! There is a bit of grass on the surface but looks like a belter of a track. A high scoring game can be expected.

Take a look at the pitch for the game.

20:15 IST:The men blue have left their hotel and are in the team bus heading to the stadium.

It's time for the 2nd T20I against England at Cardiff.#ENGvIND pic.twitter.com/ZJcNkYLfqq

Ben Stokes will be at Sophia Gardens for our second Vitality IT20 against India following his appearance for @DurhamCricket in the @VitalityBlast.

He is expected to be available for selection for our final IT20 on Sunday. #ENGvIND pic.twitter.com/85WZeK6uc9

20:01 IST: Here's a look at the training session that team India earlier had ahead of the second encounter.

The boys look all geared up for the 2nd T20I against England.

Will they go up 2-0 today in the three-match T20I series?#ENGvIND pic.twitter.com/I2VwhOWCK6

20:00 IST: Hello and welcome to the live updates of the second T20I match between India and England.

In terms of ICC rankings, a 2-0 series lead will allow India to close the gap with second-placed Australia, while a 3-0 whitewash will help them leapfrog to second behind top-ranked Pakistan. Australia will have to win both their next two games in the ongoing tri-series in Zimbabwe to stay above India. A loss on Friday will see England drop down to rank seven below New Zealand, South Africa and West Indies, respectively. It will be a surprising downturn for the high-flying English team, one of the better in limited-overs' cricket at the moment. It is a stark reminder of their poor winning ratio nevertheless, having won only 5 out of their last 10 T20 internationals. The big question facing England is how to contend with the unorthodox wrist spin of Kuldeep Yadav. In the aftermath of their loss on Tuesday, both skipper Eoin Morgan and ace batsman Jos Buttler have urged their teammates to show more patience at the crease and watch the ball carefully.

But with such a short turnaround in the fixtures' list, it is easier said than done. The English camp will deploy the services of spin-bowling machine 'Merlyn' at Cardiff. A scarcity of unorthodox wrist spinners to practice against is one of the key reasons for this move, as the spin-bowling machine is capable of replicating every style of delivery. An English team last used it ahead of the 2005 Ashes, when they were practicing to contend with Shane Warne. A key reason underlined by Morgan after the first defeat was that the middle-order batsmen, Jonny Bairstow and Joe Root, who both got stumped off successive googlies, needed more time to settle in. Despite the loss, one of the key strengths for England is their top-order's ability to handle pace and they would like another fast start at Cardiff. It is perhaps the only real concern for India emanating from that first game as the enforced new-ball pairing of Bhuvneshwar Kumar and Umesh Yadav was proven ineffective at Old Trafford.

Lokesh Rahul Kuldeep Yadav Sophia Gardens, Cardiff England vs India, 2018 England vs India, 2nd T20I Live Score Live Cricket Score Live Blogs
Get the latest updates on IPL 2021, check out the IPL 2021 Schedule and Indian Premier League Live Score . Like us on Facebook or follow us on Twitter for more sports updates. You can also download the NDTV Cricket app for Android or iOS.