Rohit Sharma played brilliantly for India in their chase of 199 in the third and final T20I against England in Bristol. 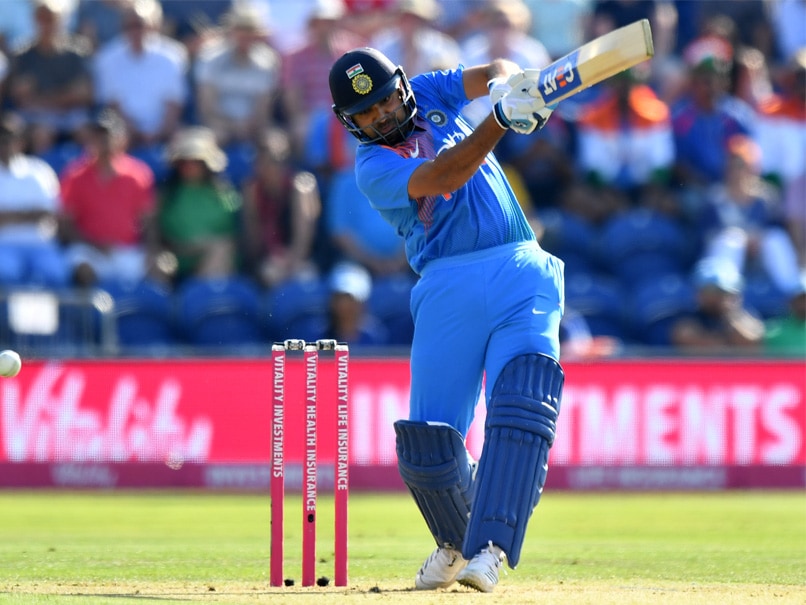 Rohit Sharma notched up his third Twenty20 International (T20I) century in the third and final match of the series at the County Ground in Bristol on Sunday. The top-order batsman piloted India's knock to reach the milestone in 56 balls. The Mumbai batsman's innings was laced with 11 boundaries and 5 hits over the fence as India beat England by seven wickets to clinch the three-match series 2-1. India's chase didn't start well with Shikhar Dhawan (5) sent back cheaply by David Willey -- who was brought in by the home side as a replacement for Tom Curran ahead of the series. Lokesh Rahul who got off to a good start, scored 19 runs off 10 deliveries before he was dismissed by Jake Ball. Unperturbed by the dismissal, skipper Virat Kohli (43) played a perfect second fiddle to Rohit to put the English bowlers on the back-foot.

Taking about his match-winning century, Rohit in the post-match ceremony said: "That's the style of my play. Assessing conditions was important at the start of the innings. Once we see off the new ball, we always knew wicket was a good one with short boundaries. Idea was to hold the shape when playing big shots. That's exactly what I did. I like to be calm, not to panic too much. I know once you're there, you can make it up later. It's important to spend some time in the middle and try and play the field."

Kohli and Rohit put on 89 runs for the third wicket to bat England out of the game.

For England, Jake Ball, David Willey and Chris Jordan scalped a wicket each.

Earlier, asked to bat, England scored 198 for eight in 20 overs on a pitch which has a par score of 225 runs, batting first. Hardik Pandya and MS Dhoni led the fightback as India pulled things back with England looking good to go past a score of 220.

England threatened to run away with the final match before medium-pacer Pandya returned figures of 4-38 to get India back in the game.

Former India captain Dhoni became the first wicketkeeper to not only take a 50 catches in T20Is but also the first to take five catches in a single T20I match.

The hosts made a flying start thanks to Jos Buttler and Jason Roy, with Roy making 67 from 31 balls and England looked set for score of over 240 before Pandya applied the brakes.

He dismissed Alex Hales, Eoin Morgan, the returning Ben Stokes and Jonny Bairstow to pick up his best figures in any T20 cricket and after conceding 22 off his first over.

England were rapidly out of the blocks after being put in by Indian captain Virat Kohli with the ball flying to all parts off Buttler's bat.

Deepak Chahar's first over in international T20 cricket, and the first of the innings, cost 13 runs with Buttler accounting for 12 of them and within four overs England were 43-0.

Roy gave one tough chance on 38 when Chahar could not hold onto a steepling catch at deep cover and got to 50 off 23 balls. Buttler was out for 34 but Roy kept blasting away making the most of the short boundaries at the County Ground.

In all he hit seven sixes, equalling the most by an England batsman in T20, before he feathered a catch off Deepak Chahar to keeper Dhoni.

Rohit Sharma Hardik Pandya Cricket England vs India, 2018 England vs India, 3rd T20I
Get the latest updates on ICC T20 Worldcup 2022 and CWG 2022 check out the Schedule, Live Score and Medals Tally. Like us on Facebook or follow us on Twitter for more sports updates. You can also download the NDTV Cricket app for Android or iOS.