Ravichandran Ashwin Has Made Alastair Cook His 'Bunny'. Here's How

A batsman becomes a bowler's bunny when he is dismissed by him on several occasions. 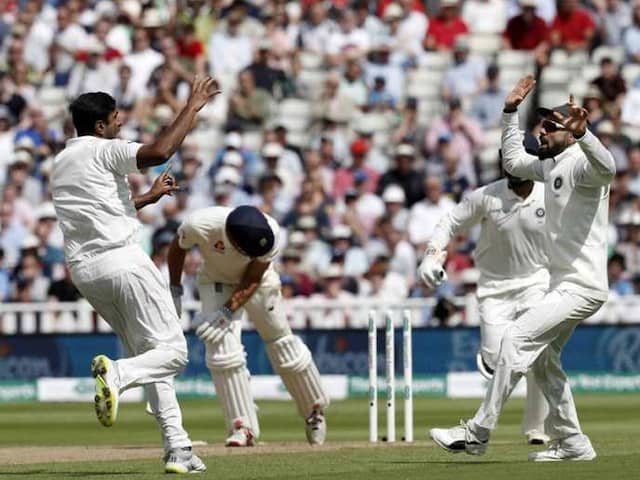 This was the eighth instance that R Ashwin has claimed Alastair Cook's wicket in Tests.© AFP

India's premier spinner Ravichandran Ashwin claimed 4 for 60 as India skittle England for 287 early on Day 2 of the first Test at Edgbaston on Thursday. It took India just 10 balls to wrap up the England innings after the hosts resumed on 285 for nine on Day 2. Ashwin dismissed England opener Alastair Cook, Ben Stokes, Jos Buttler and Stuart Broad to register a four-wicket haul in the first innings of the Edgbaston Test.

This was the eighth instance that Ashwin has claimed Cook's wicket in Tests.

Ashwin dismissed Cook for the first time during the Ahmedabad Test in 2012. In Mumbai in the same year, Cook was caught behind by Mahendra Singh Dhoni off Ashwin. He scored 122 runs in that match.

In the Kolkata Test, Dhoni stumped Cook for a paltry 1 off a superb delivery from Ashwin.

The Englishman was departed for 13 runs off Ashwin during the Nagpur Test of the same series.

In total, Cook was dismissed four times by Ashwin in 2012.

Ashwin didn't stop there as he continued troubling the opener.

Cook scored a magnificent 130 but gifted his wicket to Ashwin during the Rajkot Test in 2016.

During the Mohali Test in 2016, Ashwin removed Cook in both innings. The former England captain scored 27 and 12 respectively in the Test match.

Ashwin on Wednesday castled Cook to claim him for the eighth time in his Test career.

Australia's David Warner has fallen most number of times to Ashwin - nine.

Ravichandran Ashwin England vs India, 2018 Cricket
Get the latest Cricket news, check out the India cricket schedule, Cricket live score . Like us on Facebook or follow us on Twitter for more sports updates. You can also download the NDTV Cricket app for Android or iOS.