India would be keen to capitalise on a great outing in the first match. 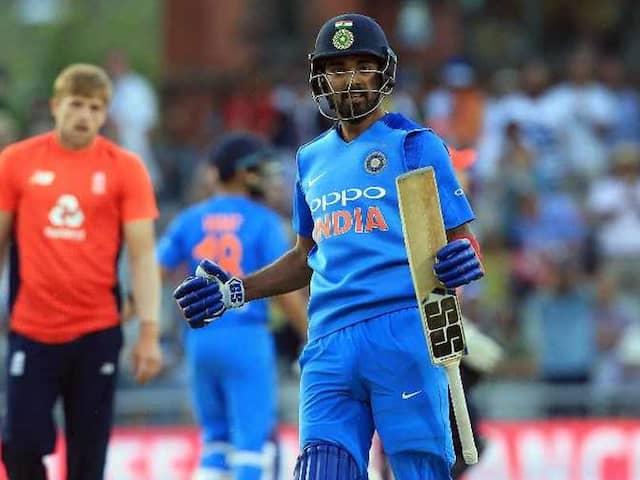 A loss on Friday will see England drop down to rank seven below New Zealand.© AFP

An emphatic win in the opening game of the T20 International series against England has set the tone for the rest of India's long-awaited tour as the visitors would look to ensure that the spin-wary hosts remain on the back-foot when the two sides clash in the second T20I at Sophia Gardens in Cardiff on Friday. India's star spinner Kuldeep Yadav recorded his best figures as he took five wickets giving away just 24 runs, while KL Rahul scored an unbeaten second T20I century as the Men in Blue produced a fine all-round display to stun Eoin Morgan's men by eight wickets in Manchester for an early lead on this tour. Another win would seal the three-match series for Virat Kohli and his team. In fact, India stand on the cusp of a sixth successive T20I series win - a run stretching back to their 2-1 win over New Zealand at home in November 2017. In all, they have been unbeaten in bilateral T20I series since September last year.

In terms of ICC rankings, a 2-0 series lead will allow India to close the gap with second-placed Australia, while a 3-0 whitewash will help them leapfrog to second behind top-ranked Pakistan.

Australia will have to win both their next two games in the ongoing tri-series in Zimbabwe to stay above India.

A loss on Friday will see England drop down to rank seven below New Zealand, South Africa and West Indies, respectively.

It will be a surprising downturn for the high-flying English team, one of the better in limited-overs' cricket at the moment.

It is a stark reminder of their poor winning ratio nevertheless, having won only 5 out of their last 10 T20 internationals.

The big question facing England is how to contend with the unorthodox wrist spin of Kuldeep Yadav.

In the aftermath of their loss on Tuesday, both skipper Eoin Morgan and ace batsman Jos Buttler have urged their teammates to show more patience at the crease and watch the ball carefully.

But with such a short turnaround in the fixtures' list, it is easier said than done.

The English camp will deploy the services of spin-bowling machine 'Merlyn' at Cardiff.

A scarcity of unorthodox wrist spinners to practice against is one of the key reasons for this move, as the spin-bowling machine is capable of replicating every style of delivery.

An English team last used it ahead of the 2005 Ashes, when they were practicing to contend with Shane Warne.

A key reason underlined by Morgan after the first defeat was that the middle-order batsmen, Jonny Bairstow and Joe Root, who both got stumped off successive googlies, needed more time to settle in.

Despite the loss, one of the key strengths for England is their top-order's ability to handle pace and they would like another fast start at Cardiff.

It is perhaps the only real concern for India emanating from that first game as the enforced new-ball pairing of Bhuvneshwar Kumar and Umesh Yadav was proven ineffective at Old Trafford.

Even with Kuldeep causing all sorts of trouble for the hosts, India wouldn't like to pull things back after a high-flying English start once again.

The visitors are unlikely to make a change and disturb their winning combination and the pacers will have to learn from the experience of bowling on such batsmen-friendly pitches.

England's top-order, in particular Jason Roy, doesn't enjoy facing spin in the power play overs, and India might opt for Krunal Pandya, who is proficient at bowling economical left-arm spin.

However, it is tough to see the Indian team management making space for him in the eleven after just one game. Instead, they might back Yuzvendra Chahal to deliver any initial spin overs, despite being taken for runs in Manchester.

Weather could play a part in the game here at the Sophia Gardens. After enjoying a sunny welcome both in Dublin and Manchester, the team was greeted to typical English grey skies, light rain and chill when they arrived in Cardiff on Wednesday.

It is expected to clear out for match day, but rain curtailed the last game these two sides played here in 2014. India had won that ODI with an all-round performance from Suresh Raina.

England pacer Tom Curran has been ruled out of the remaining T20Is and the ODI series owing to a left side strain. For the ODIs, his brother Sam has been named as replacement.

England Cricket Team England vs India, 2018 Cricket England vs India, 2nd T20I
Get the latest Cricket news, check out the India cricket schedule, Cricket live score . Like us on Facebook or follow us on Twitter for more sports updates. You can also download the NDTV Cricket app for Android or iOS.