India coasted to an easy win in the first One-day International and will seek to seal off another series win vs England. 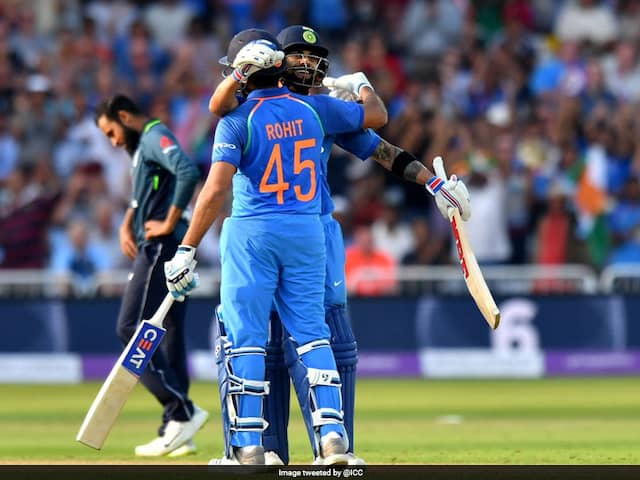 India are unbeaten in bilateral ODI series since the tour of Australia in January 2016.© Twitter

India, riding high on confidence, will look to wrap up another series on their ongoing tour of the United Kingdom when they face England for the second One-day International at the Lord's cricket ground on Saturday. On the other hand, the struggling hosts will be hoping to find a way to tackle the marauding Kuldeep Yadav, who wreaked havoc during England's 8-wicket loss at Trent Bridge on Thursday. With only a day's gap between the two matches, it hasn't worked out in England's favour, who have their task cut out once again as they trail the three-match series by a margin of 0-1.

In conditions resembling those in Manchester, in terms of a dry pitch, the English batsmen failed to comprehend Kuldeep's wrist spin. Like at Old Trafford, he was also helped by the breeze blowing across the ground and gained drift, bamboozling the batsmen to pick his best figures in ODI cricket.

Unlike in the T20I series, England do not have the option of battling this phenomenon with a practice outing against the spin-bowling machine, Merlyn. With both teams travelling to London on Friday, there might not even be enough time to sit down for some video analysis.

In that light, the English batsmen will have to contend mentally with how to play Yadav tomorrow. It will be easier said than done. Some of it is down to shot selection. At 70-odd for no loss after 10 overs, Jason Roy didn't need to play the two reverse sweeps in two overs against the wrist spinners, the second resulting in his dismissal. Skipper Eoin Morgan didn't play the best shot against Yuzvendra Chahal either. Yadav outfoxed both Jonny Bairstow and Joe Root, with the latter in particular looking all at sea.

It has been a poor ten days for Root, and England's prime batsman for the summer is looking bereft of any confidence. This was the third time in three innings that he was out to wrist spin, falling to googlies in the two T20Is he played. A sharp leg break did the job at Trent Bridge, in what is quickly becoming a problem for Root.

A school of thought suggests that Jos Buttler could be elevated in the batting order once again. He looked the most composed amongst English batsmen and extended his good run of form to get another half-century under his belt, albeit batting too low at number six. With the wrist spinners deployed in tandem, Morgan had admitted that batting against the new ball was their best chance to deny India. This could inspire a promotion for Buttler to number three tomorrow.

Pitch, apart from mental preparation, will also be key for England. After going 1-0 down in the T20Is, the next two wickets in Cardiff and Bristol had a top layering of grass on them. Despite the grass, there wasn't much swing available in either game, yet this move did just enough to blunt the wrist spinners. So much so, that the green top in the third T20I bluffed the Indian team management into dropping Yadav for that series' deciding game, albeit the wicket turned out to be a batting beauty.

It remains to be seen if the wicket at Lord's - and Headingley (Leeds) thereafter - will have any green on the surface. The domestic T20 competition here in England began on July 4; so word is that pitch at Lord's would reflect that, never mind the green tops in Cardiff and Bristol. Middlesex had hosted Surrey here on July 5 for their first T20 game of the season, and Ireland's off-break bowling all-rounder Paul Stirling picked up 3-26. The two teams scored at 8-plus per over.

In team news, Alex Hales has now been ruled out of the entire ODI series owing to a side strain. He had earlier been ruled out of the first ODI, with the team management keeping an eye on his recovery for the remaining two games. Middlesex batsman Dawid Malan will stay with the England squad for the second ODI.

India, meanwhile, are unbeaten in bilateral ODI series since the tour of Australia in January 2016. They have won nine successive contests thereafter, with the 2017 Champions Trophy the only tournament wherein they failed to return with a trophy. Barring any unforeseen fitness issues, the same playing eleven could feature at Lord's. Bhuvneshwar Kumar was seen bowling at Trent Bridge ahead of the first ODI, albeit the team management might not want to rush him back in view of sterner challenges ahead.

It will be a comfortable bus journey from Nottingham to London for the Men in Blue. In the knowledge that just six days after drawing first blood on this long tour, they now have a chance to register another serious blow to England. Wrapping up the ODIs with a 2-0 unassailable will also close the gap between the two sides in the ICC rankings. More importantly, it will hand over bragging rights to India ahead of the five-Test series.

England Cricket Team England vs India, 2018 Cricket England vs India, 2nd ODI
Get the latest Cricket news, check out the India cricket schedule, Cricket live score . Like us on Facebook or follow us on Twitter for more sports updates. You can also download the NDTV Cricket app for Android or iOS.