Left-arm wrist spinners are a rarity in top-level cricket and England's batsmen are struggling to pick which way Kuldeep Yadav is turning the ball. 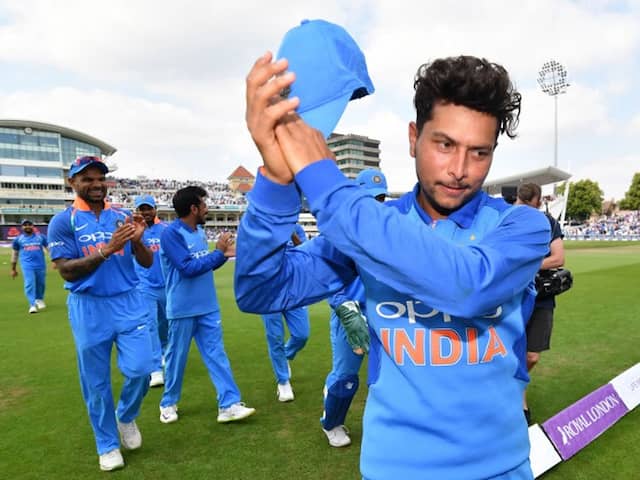 Kuldeep Yadav is hopeful that his recent limited-overs performances will prompt India selectors to include him in their squad for the upcoming five-match Test series in England. The left-arm wrist spinner took a superb One-day International (ODI) best six for 25 in his maximum 10 overs as India beat England by eight wickets at Trent Bridge on Thursday to go 1-0 up in a three-match series. That followed the 23-year-old's five for 24 in the first Twenty20 international against England at Old Trafford on July 3, a series India won 2-1.

His latest haul, the best by any spinner in an ODI against England, helped India dismiss the hosts for 268 in Nottingham, with opener Rohit Sharma then making 137 not out as the tourists won with nearly 10 overs remaining.

Left-arm wrist spinners are a rarity in top-level cricket and England's batsmen are struggling to pick which way Yadav is turning the ball.

After the one-dayers, India remain in England for a five-Test series.

With Britain, by its standards, experiencing something of a heatwave, pitches around the country are dry and receptive to spin, rather than the traditional green surfaces beloved of seam bowlers.

Yadav's recent success, allied to favourable conditions, has led to suggestions he could be included in the Test squad due to be announced by India's selectors over the weekend.

In recent times India have tended to deploy the experienced pair of off-spinner Ravichandran Ashwin and left-arm orthodox Ravindra Jadeja as their specialist slow bowlers in the five-day game.

But as he reflected on his heroics at Trent Bridge, Yadav made it clear he wanted to add to his tally of nine wickets in two Tests -- the last against Sri Lanka in Pallekele in August 2017.

"I bowled wicket to wicket and tried to vary my pace," he said. "Talking about Test cricket, I am hoping for the call and let's see what happens in a couple days when they announce the Test team."

England's top three batsmen were in devastating form during a preceding 5-0 series rout of Australia last month -- which included a men's ODI record total of 481 for six at Trent Bridge on June 19.

But on Thursday, albeit with opener Alex Hales missing with a side injury that has ruled him out of the entire series, Yadav removed an England top three of Jason Roy, Test skipper Joe Root and Jonny Bairstow in a stunning spell of three wickets for five runs in 10 balls.

"It doesn't matter to me because I never bowl looking at who the batsman is," explained Yadav.

"In my mind, I am only thinking about how I can contribute to the team," he added.

England have used a specialist bowling machine in a bid to help them prepare for the challenge of facing Yadav, but the bowler himself was unimpressed.

"With a bowling machine, you cannot see the hand or wrist or arm during delivery and the ball only turns," he said.

"So if you are not picking the ball (from the hand), then there is a huge problem."

Ben Stokes (50) and Jos Buttler (53) prevented complete collapse during a fifth-wicket stand of 93 but they too fell to Yadav.

England, the 2019 World Cup hosts, don't have much time to come up with a new plan for Yadav ahead of Saturday's second ODI at Lord's and skipper Eoin Morgan admitted: "He is very good and there is no getting around that.

"He exposes an area of our game we need to improve on, that is a healthy thing," the Irishman added.

"It's a chance to improve in this area, however long it takes, between now and the World Cup."

Meanwhile Morgan tried to put England's struggles against Yadav into perspective by saying: "Considering there is only one left-arm 'Chinaman' (a left-arm wrist-spinner) bowler in the world it is not a huge concern.

"You play against one team and he happens to be very good, he is not any old left-arm 'Chinaman'."

India Cricket Team Kuldeep Yadav England vs India, 2018 Cricket England vs India, 1st ODI
Get the latest Cricket news, check out the India cricket schedule, Cricket live score . Like us on Facebook or follow us on Twitter for more sports updates. You can also download the NDTV Cricket app for Android or iOS.