Alastair Cook scored his 33rd Test century off 210 balls at The Oval. 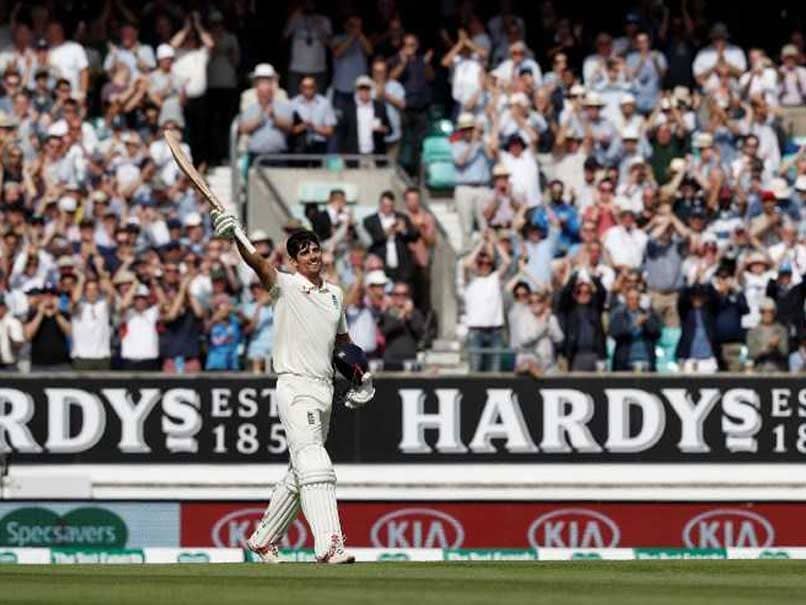 Alastair Cook received a standing ovation from the fans at The Oval after he hit a century.© AFP

Alastair Cook made his farewell Test memorable not only for himself but also for the England cricket team and fans present at The Oval. Alastair Cook scored his 33rd Test century on the fourth day of the fifth and final Test match against India, bringing the curtain down on a record-breaking England career (2006-2018) in style. Cook, who scored 71 in the first innings of the fifth Test against India, reached his century off 210 balls in the second innings. Cherishing the former England captain's century, the England cricket team were seen in jubilant mood as they were seen giving a standing ovation to Cook.

"LOOK WHAT IT MEANS TO THEM!" the video uploaded on Twitter by the official account of the England Cricket was captioned.

LOOK WHAT IT MEANS TO THEM!

Cook reached the 100-run mark in dramatic fashion when he scampered a single only for Jasprit Bumrah's throw to flash across the ground and over the boundary rope for four overthrows.

Cook removed his helmet and raised his arms as the Oval crowd went berserk, giving him yet another standing ovation.

He had to work hard for his runs on Sunday evening but looked more fluent on the penultimate day of the Test.

The opener is retiring from international cricket with a stack of England records to his name including most Test appearances, most runs and most centuries.

The left-handed batsman leapfrogged Sri Lanka's Kumar Sangakkara to fifth on the all-time list, becoming the most prolific left-hander in history.

The crowd has been on its feet multiple times during the match, aware they are witnessing the final chapter of Cook's long and illustrious career.