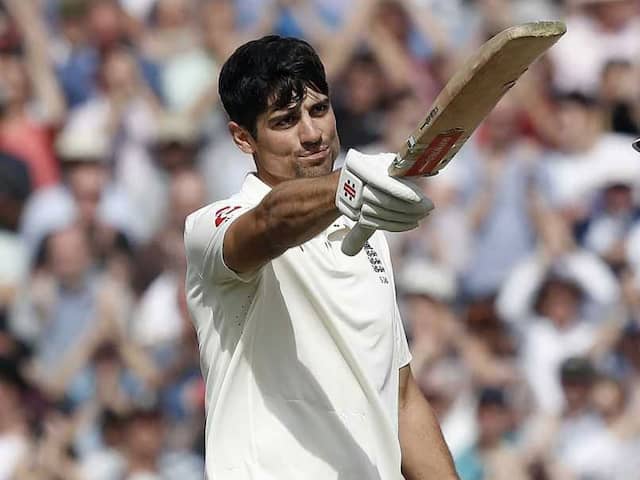 Alastair Cook ensured his final Test innings got a fitting finale as he hit a fine century against India for England on Monday. Alastair Cook brought up his 33rd Test century off 210 deliveries to ensure England kept the dominance over the visitors in the fifth and final Test at The Oval. The 33-year-old English opener is also England's record run scorer. Social media was abuzz with praises for the England batsman after his batting heroics. Former and present cricketers posted congratulatory messages on their respective Twitter accounts.

100 in the final innings could not have happened to a more deserving batsman. #AlastairCook

That was a very very special moment ... All of us who are privileged to be here today will remember that forever ... #Cook #100 ... If any person deserves that send off it's Alastair ... Fairytales do happen ...

What a way to say goodbye...test No 33 for Alastair Cook, richly deserved! #topclass #Congratulations

A century in your last innings. And an ovation that looked like it would never end. It was, as Joe Root said, "written in the stars". What a moment for the mighty Alastair Cook.

England's highest run scorer, retires at the age of 33.

Even an average Indian batsmen wouldn't willingly retire at 40.

An average Sri Lankan cricketer would take his 4th retirement at 42.

Shahid Afridi will probably make his cricket comeback from his death bed.#AlastairCook

Along with 33 Test hundreds, Cook also has 57 half-centuries to his name from 160 Test matches, highest being 294. The left-handed batsman also holds the world record of appearing in consecutive 158 Tests. Cook also became the 13th England cricketer and 40th overall to score a century in their career's last Test match.

Resuming his innings on 46, Cook alongside skipper Joe Root, played extremely well in trying conditions. The Indian bowlers tried their best to break the partnership between Cook and Root but failed. Cook's century was laced with 8 fours while Root took a more aggressive route hitting 11 fours and a solitary six for his unbeaten 92. After failing to open his account in the first inning, Root ensured he made amends with his fiery knock. England were 243/2, leading India by 283 runs at lunch.

England Cricket Team England vs India, 2018 England vs India, 5th Test Cricket
Get the latest Cricket news, check out the India cricket schedule, Cricket live score . Like us on Facebook or follow us on Twitter for more sports updates. You can also download the NDTV Cricket app for Android or iOS.