In what appears to be a pre-New Year's party, Yuvraj is seen wearing a black jacket with a red hat, but it is Sachin's glittering silver hat that got the fans talking. 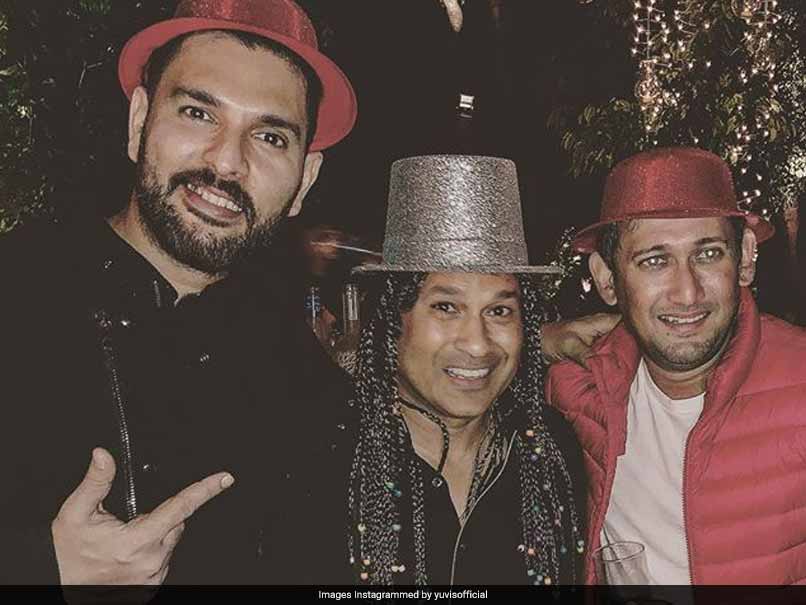 Cricketer Yuvraj Singh has found it hard to nail down a place in the Indian cricket team off late and is fighting for a place in the squad since he was recalled for the West Indies tour in June this year. Even though he is missing from the on-field action, Yuvraj makes sure that he is active on social media and gives his fans a slice of his everyday life. The Punjab-cricketer on Saturday uploaded a photo a him with former Indian seamer Ajit Agarkar and Indian batting legend Sachin Tendulkar on Instagram and captioned it as 'Thanks @sachintendulkar for the lovely night was great fun #monster Agarkar."

In what appears to be a pre-New Year's party, Yuvraj is seen wearing a black jacket with a red hat, but it is Sachin's glittering silver hat that got the fans talking.

Soon after the post, fans flooded the comments section and expressed their love and gratitude for the trio. While one of the user mentioned that this photo reminded her of best childhood cricket memories, many of the users expressed their desire of watching Yuvraj donning the blue jersey again.

After failing the Yo-Yo fitness test three times, the left-handed batsman cleared the fitness test early in December and said that he won't give up on his career at least till 2019.

"I am still playing. I don't know what format I am going to play. But I am pushing everyday as hard as I used to, may be harder than before because I am getting older. And I see myself playing cricket till 2019 and obviously take a call after that," Yuvraj had said.

Sachin, who is the icon for many cricketers, former and present, adored Yuvraj's dedication of making a comeback into the Indian squad and had wished him on his birthday saying that he is both a champion and a fighter.

There are champions and then there are fighters. For me, you are both. Wishing you a very happy birthday, Yuvi. May you have a successful year ahead. pic.twitter.com/O1i4fTtvx5

Yuvraj, who played a pivotal role in India's 2011 World Cup triumph, had said that his career decisions will only be decided by him.

"I would like to tell that I am failing. I still fail. I failed the last three fitness tests but yesterday I passed my fitness test. After 17 years I am still failing. I am not afraid of failure. I have gone through ups and downs. I have seen defeat and that's what's the pillar of success," the veteran had said.

"To be a successful man, to be a successful person in your life, you need failure and you've got to be defeated. That will make you a stronger person and it will take you to the next level," he added.

Comments
Topics mentioned in this article
India Cricket Team Yuvraj Singh Sachin Tendulkar Cricket
Get the latest updates on India vs South Africa and check out  Schedule, Results and Live Score. Like us on Facebook or follow us on Twitter for more sports updates. You can also download the NDTV Cricket app for Android or iOS.